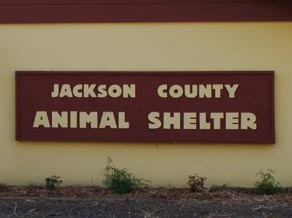 When a report estimating cost and space needs for a new animal shelter came back with a staggering price tag — the report estimated a cost of $5.4 to $6.6 million — Jackson County commissioners had to catch a breath and start rethinking their planned timeline of capital construction.

When planning for the animal shelter, commissioners had been using a guesstimated figure of $2.5 million. Even that figure — less than half the cost now suggested — had elicited strong reaction from some members of the board. The $5-million-plus estimate likely means that the animal shelter project — which had been ranked two out of eight when commissioners began sorting construction priorities in March — will take a backseat for a while.

“It’s got a lot of stuff in it you have to decide — it is a want, but is it a need?” said County Manager Chuck Wooten.

The report recommends a 15,000- to 18,000-square-foot building on 2.5 to 5 acres of land, with capacity for 50 dogs and 55 cats or kittens. In addition to animal housing, the report said, the building should have a spay-neuter clinic, a receiving area, a multi-purpose community education room, a lobby and staff offices. Because the new shelter would be substantially bigger than the existing one, the county would also need to hire more staff to run it. The report does not say how many positions would be necessary.

“I’m committed to doing something, because we need to do something and we need to have a lot better than what we have, but I don’t think the majority of people in this county will tolerate us spending that kind of money on that kind of facility,” said Commissioner Boyce Deitz.

Most everyone agrees the existing shelter needs replacing. It’s 35 years old and endowed with a failing septic system, a well and heating system without backup power, spotty Internet service and limited space to house animals. The only entrance is through the front door, setting up potential for conflict between animals coming into contact with each other at what is already a stressful time for them. Office space is small and cramped. The building is hard to secure and has been subject to multiple break-ins.

But $5 million? To Deitz, the county has too many human needs to pour those kinds of resources into an animal shelter. Commissioners have recently committed about $9 million to fix up the schools, but the system still has needs, and services to the homeless and the elderly could use expansion, Deitz said.

“We have dogs and we have cats and we have cattle and I spend money on them, taking care of them. But I wouldn’t spend for them like I would for my granddaughter if she was sick,” Deitz said by way of comparison. “I separate one from the other.”

Chairman Brian McMahan also pointed out that building a facility meant to house 100 animals might be overkill. The current shelter houses 15 dogs and 15 cats — while most agree more space is needed, the fact remains that the shelter didn’t have to euthanize a single dog for lack of space during all of 2015, though some cat euthanizations were necessary.

But the other thing to keep in mind, McMahan said, is that the county has been making a concerted effort to fund spay and neuter services, reducing the number of unwanted animals. Those numbers have gone down over the years and hopefully will continue to do so.

McMahan also acknowledged the volunteers who have been working tirelessly to get animals out of the shelter before euthaization happens, either through adoption, foster care or transport up north where they’re more in demand. Part of the discussion surrounding constructing a new shelter has centered on alleviating the burden that falls to the volunteers.

“The animal advocates in this county are doing a very good job and it’s reduced the number of needed runs, but even if all those animals were out there, I’m not sure it would be 105,” McMahan said.

The same goes for the Health Department building itself, which commissioners ranked as the top capital priority when they first ranked the projects in March. That project will also take a backseat until a new health director comes on board, likely sometime this summer.

There are a couple different ways that project could go. Commissioners could decide to buy a piece of property and build an entirely new Health Department building, or they could remodel the existing building to meet current needs. There’s not yet a clear consensus on which way to go.

McMahan, for instance, had fully supported constructing a new building, connecting that project to another one — renovation of the justice center. Superior Court Judge Bradley Letts has been telling commissioners for years that the courts are short on space. McMahan had thought that they could simply move all non-court functions from the existing Justice/Administration Center into the old Health Department Building once a new one was built, remodeling the existing Justice Center for expanded space.

But, according to an assessment done by the company Heery International, McMahan said, “because of the way the Justice Center was constructed, we can’t just completely vacate all county offices from the Justice Center and say ‘here it is’ to the courts.” There still wouldn’t be enough space.

“I spent my whole life coaching and teaching, and people tell me you can’t do something, and someway when someone tells you it absolutely can’t be done there’s probably a way to do it,” he said of remodeling the Justice Center. “We could probably fit it and make it work.”

By the same token, he says he fully supports remodeling the Health Department, not rebuilding it.

Those final decisions will likely be made with the help of the new Health Department director, the Health Board and the Animal Shelter Task Force, Wooten said. They’ll need to have some “real tough discussions,” likely deciding on a course of action sometime in the late summer or early fall.

Projects for the year ahead

In the meantime, commissioners will likely choose a couple other projects to move forward on in the new budget year starting July 1.

Namely, developing the 2.3-acre property the county purchased recently into a park for the Savannah community and constructing a new maintenance building at Southwestern Community College.

The preliminary plan for the park calls for a short nature trail, a playground, swings, a picnic shelter, restrooms, a walking loop and access points to Savannah Creek, which flows along the property’s edge. Developing the park is expected to cost somewhere around $250,000, with half the cost paid for with grant funds. Commissioners also want to keep their eyes open for an opportunity to develop a similar resource in the Qualla community.

The maintenance building and renovations to the space where maintenance operations are currently carried out would carry a larger price tag, about $1.2 million.

The existing maintenance building, said Cliff Statler, SCC’s vice president for finance and administrative services, is “badly obsolete,” and because replacing it isn’t a project that would directly impact students, the school can’t fund it with money from the N.C. Connect Bond, which included $7.1 million for capital projects at SCC.

“I asked if I could put that as part of the bonds, and they said, ‘Don’t. It will be denied,’” Statler said of a recent trip to Raleigh.

After building a new space for maintenance, the area they’re currently using in the college’s Summit Building would be remodeled for welding and HVAC classes.

So, the bottom line seems to be that the smaller projects are the ones closest on the horizon. SCC’s maintenance shed and a park for Savannah this year, and maybe get the ball rolling on a plan to renovate some additional courtroom space in the Jackson County Justice Center, buying some time for more long-range planning.

Then, once the new health director comes on board, commissioners will be able to better pin down a game plan for the animal shelter and Health Department buildings.

One thing is for sure — when it comes to balls in the air, Jackson County has plenty.

• Fiscal year 2016-17: Build a new maintenance building at Southwestern Community College and renovate the Summit building. Develop a park on property purchased in the Savannah community. Fund a study looking at costs and designs for renovations to the Jackson County Courthouse that would provide a short-term fix for space issues.