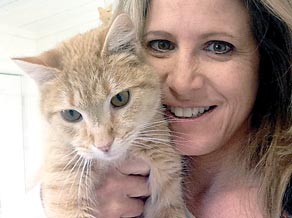 Jamie Powell has a special talent. She can not only tell the 100 cats living at FUR’s feline sanctuary apart, but can even remember their names — despite the revolving door of cats being continually rescued and adopted out.

“They are our babies. They are like our children. They all have their own unique personalities,” said Powell, a co-founder of FUR of WNC, a cat rescue group in Haywood County. “They are all unique and have their own stories.”

True to its tagline Guardians of Displace Felines, FUR serves as an orphanage for cats and kittens with nowhere else to turn. Cats find their way to FUR’s sanctuary in a variety of ways.

Some are rescued from the county animal shelter, where cats face a race against the clock to find a loving owner before the looming threat of euthanasia comes calling.

The sanctuary gives shelter cats a new lease on life, buying them more time in an environment that’s more conducive to adoption.

“The shelter is not a good environment for a cat. A perfectly adoptable cat could be deemed feral at the shelter because it is such a crazy place,” Powell said.

Scared out of its wits, even the most loving and friendly cat won’t show it amid the incessant barking and cramped cages.

“At the Sanctuary, it is homelike. It is cozy. There’s no barking dogs. It’s a refuge,” Powell said.

But many of the cats at the sanctuary have bypassed the shelter altogether and are brought to FUR by their original owners who can no longer care for them.

“There are lot of reasons why cats are displaced,” Powell said. It could be a couple getting a divorce, someone who’s lost their job and can no longer afford a pet, or a renter who can’t have pets where they live anymore.

“We have several cats right now where someone has called and said, ‘Mom is going into a nursing home’ or ‘Mom died and she had three cats and we don’t know what to do with them,’” Powell said.

Yet others are rescued from the wild. While feral cats who have lived in the wild their whole life will never be a candidate for adoption, their kittens are easily socialized if found early enough.

When a feral cat is discovered with a litter of kittens, the entire family is brought to the Sanctuary to live in an enclosure until the kittens are weaned.

“Then we fix the mother and let her go back to her colony and we raise the kittens here,” Powell said.

There are an estimated 6,000 free-roaming cats in Haywood County, dramatically less than the 10,000 there were a decade or so ago. The reduction is largely due to the Herculean efforts of volunteer trap-spay-release programs. A legion of volunteer caretakers who tend colonies of feral cats across the county remain vigilant for pregnant mothers. Other times, calls are referred to FUR by vets, or people wondering what to do about the cat that just gave birth under their porch.

FUR has a soft spot for senior cats, whose calmer nature makes them excellent companions but often can’t compete with the cute factor of kittens without an advocate like FUR to find them a home.

“We are for the underdog so to speak,” Powell said.

FUR of WNC — which stands for Feline Urgent Rescue — was founded in 2012 by Powell and two fellow cat lovers. While the county already had rescue groups focused on dogs, there was a gap when it came to cats.

FUR is an all-volunteer undertaking, and is in desperate need of volunteers to help care for the cats at the Sanctuary.

“There’s not enough of us,” Powell said.

FUR is also in constant fundraising mode to provide the necessary medical care, food, overhead and upkeep of the Sanctuary property.

To keep up with daily diary posts from the cats at the Sanctuary, check out FUR’s Facebook page, or visit furofwnc.org.