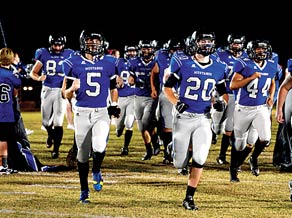 A plan to replace the football field at Smoky Mountain High School with artificial turf is likely to move ahead following an engineer’s finding that the work could be done well within Jackson County Public School’s $715,000 cap for the project.

“We’ve done a lot of research, and I’m more convinced than ever this is a wonderful thing for our community and for our students,” said Superintendent Mike Murray.

According to a study completed by Asheville-based Civil Design Concepts, the turf could be purchased and installed for somewhere between $625,000 and $650,000, with the cost to the school system coming in $200,000 less than that due to a grant they landed from the NFL. The school system has already sent the project out to bid, planning to present the results to the school board for a vote at its March 15 meeting.

The hope, Murray said, is that by acting fast the school system could land a bid even lower than the engineer’s estimate. Summer is the busiest season for these types of projects, so doing the project in the springtime could result in savings.

But there’s also potential for a higher final price tag. One factor is how much the turf installation would impact the track that circles the field. Some portion of the track would likely be damaged during installation, so the school system would need to pay for its repair. It’s looking like the damage won’t be too extensive, said Murray.

At some point, the school system would like to completely replace the track, which is not a legal size for competition. What might happen for the moment is that the track would lose one of its lanes to the incoming artificial turf field, a possibility that, according to Murray, has been OK’d by the track coach.

A second factor is how much the school board opts to spend in order to quell concerns over the artificial turf’s safety. While the plan has garnered widespread support — the school system attached letters of support from 14 different entities to its grant application, including a variety of school athletic programs, Carolina West Sports Medicine, Stanberry Insurance, Special Olympics of Jackson County and the Carolina Panthers — it has encountered some opposition. The objections mainly center on health concerns associated with artificial turf.

“It’s a higher injury (rate) because you’re playing on grass, it’s going to give and let out,” said Denny Wood, a longtime youth football coach who’s been a vocal opponent of the plan. “When you’re playing on turf it’s an immediate stop.”

Wood also points out artificial turf’s purported link to cancer, allegedly stemming from the crumb rubber that’s often used as a base for the faux grass.

Objections like those are why Murray said the school board is “very interested” in using organic material — such as cork, coconut shell or walnut shell — for the field’s infill. Those materials typically cost more but have not been criticized like crumb rubber has — especially the kind that’s recycled from used car tires.

“There’s been no link to the organic fields with any type of health issues, so at this point we’re strongly looking at this,” Murray said.

That’s not to say Jackson Schools won’t use rubber fill if the bid for organic fill comes in astronomically high. But it’s not just a one-or-the-other choice, Murray said, because different grades of crumb rubber are available. He called the link between cancer and rubber-infill fields “questionable” and said that the correlation is even less when it comes to rubber infill that originates from new rubber, rather than recycled car tires.

“There are all kinds of options,” he said.

In deciding which way to go with the artificial turf question, Murray said, he and other school district administrators have made the rounds to artificial fields throughout the region, hearing resounding praise from the coaches and administrators at those schools. He believes that many of the issues with artificial turf, especially complaints of increased injuries resulting from the hard stop created by the artificial field compared to the natural grass ones, are true mainly of the older fields, not the new ones being sold now.

“Everyone that we talked to agreed on that the compression on this is amazing, so to me it will limit injuries rather than magnifying injuries,” Murray said.

The other side of the artificial turf question is the cost. Putting in an artificial field will be expensive, even with the $200,000 NFL grant that spurred the school system to nudge the project to the front of the line. Murray has pledged that the school district will cap its contribution at $515,000, bringing the total budget for the project to $715,000. But critics such as Wood have questioned whether, with an inventory of roofs in desperate need of repair and a dearth of current textbooks in the classrooms, an artificial field is the best way for the school system to spend money.

“There’s plenty of ways to spend money if they want to spend money, but I don’t think the football field is where to go,” Wood said.

If the engineer’s estimate of $650,000 holds true, the school system would end up paying $450,000 outside the grant funding to install the field, likely incurring extra cost to repair the track. Artificial fields are usually guaranteed to last eight to 10 years — though Murray believes the school system could eke several more years of life out of the field, easy — after which time the above-ground portion must be replaced. In 2016 dollars, replacement costs about $375,000, according to Murray.

By contrast, a grass field can last for decades — the surface of the field at SMHS was last replaced in 1994. However, grass fields cost a good bit to maintain. Over the past two years, Jackson Schools have shelled out $37,000 for service and repairs to the field, a figure that doesn’t include labor to mow the fields, machinery costs or line painting. Artificial fields aren’t without maintenance needs — a sweeper, included with the cost of the field, must be used to groom it after use — but they’re generally lower maintenance.

The school system has not come up with a detailed cost comparison between purchasing an artificial field and building a second field to add to the playing opportunities of the first. There are a couple of reasons for that, Murray said. First of all, the school system has no good place to locate a second full-size playing field. And secondly, cost savings is not the main incentive for the project.

“The multi-use issue is the biggest issue for me personally,” Murray said.

Currently, Jackson Schools has only one full-size football field, and in order to keep it playable for Friday night football, other uses throughout the week are limited, especially in wet weather. Artificial fields, meanwhile, can be used constantly in nearly any weather, though hot weather does require caution due to the potential for rubber infill to capture heat. If SMHS had an artificial field, it would be used by seven football teams, six cheerleading squads, four soccer teams, two marching bands, physical education classes and Special Olympics competitions.

“I really think this is a wonderful opportunity for us,” Murray said.