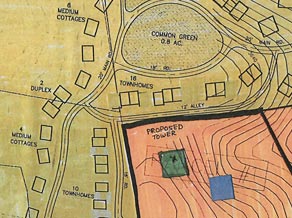 A proposal to build a new cell tower outside Cashiers got the OK from Jackson County Commissioners last week, a decision that came after months of public discussion and heated debate.

“I’m just happy not to have to deal with it anymore,” said Mark Zachary, whose family owns the land where the tower will be built.

Crown Castle, a tower building company, will construct the tower and lease antenna space to Verizon. Service emanating from the new tower will replace that on an existing tower at the Cashiers crossroads, which will go dark later this year. The new tower, a 120-foot monopole, will go up on a hillside in the Gana Sita neighborhood, a half-mile from the crossroads, and is expected to provide better service than the existing tower.

The proposal faced stiff opposition from the outset by adjacent property owners Rick and Donna Barrs, however. Crown Castle was asking build the tower within 140 feet of the property line, and while no developed structures currently sit on the Barrs’ property, they said they’d had a long-range plan in place to build a neighborhood of cottages there.

If the tower went up where proposed, they’ve been arguing since Crown Castle first approached the county in June, the value of their future development would tank. Meanwhile, Crown Castle said that the proposed site was really the only spot on the 20-acre tract that would do the job and said the alternate places the Barrs pointed out would not work.

Nearly two full days of discussion preceded the commissioners’ final decision, including a public hearing in December and nearly 14 hours of testimony and deliberation spread over two days. The proceeding, called a quasi-judicial hearing, followed the format of a court case with commissioners sitting as judges.

After all that, it took just about an hour of deliberation for them to unanimously approve the application. Commissioners had a specific set of criteria to consider when making the decision, dictated by a recently updated county ordinance. It was the first time they’d used the ordinance to consider a cell tower application.

“I think personally the hardest thing the board had to determine, the one issue we wrangled with, was whether or what amount of injury was there to the value of the Barrs’ property,” said Commission Chairman Brian McMahan.

According to the county ordinance, any proposed cell tower must not “substantially injure” the value of adjacent properties. “Substantial” is a difficult term to define in dollars and cents, but much of the decision came down to testimony offered by a pair of Realtors, one called by the Barrs and the other by Crown Castle.

According to Richard Robson, a Cashiers Realtor with nearly 40 years of experience, the Barrs’ investment would take a beating if the tower were built.

“We believe the tract will lose four to eight potential homesites due to the location of the proposed cell tower,” Robson wrote in a report admitted as evidence, “because of non-residential views and noise created by the tower.”

“We believe the presence of the cell tower will have a negative impact on value,” Robson wrote.

However, the problem with Robson’s testimony was that it didn’t include an analysis validating his numbers and process, McMahan said. The Realtor testifying for Crown Castle delivered a lengthy analysis reaching the opposite conclusion. The report, prepared by Asheville Realtor Douglas Thrash, looks at the selling prices for properties next to other cell towers in the area and compares them with sale prices of properties in the same neighborhood that are not adjacent to the property housing the cell tower.

Most of the properties included in the analysis sold at a higher price than neighboring properties not adjacent to a cell tower.

Based on those numbers, Thrash wrote, “it is my opinion that the proposed telecommunications facility … will not substantially injure the value of adjoining or abutting properties.”

Commissioners considered insight from the University of North Carolina Chapel Hill School of Government, which pointed out that in appellate court cases, decisions center on what kind of study and analysis an expert witness has done to back up his opinion rather than on whether he is qualified to provide an opinion. From that standpoint, McMahan said, Thrash’s detailed analysis made the better argument.

Nailing down the hypotheticals

But much of what the decision came down to, McMahan said, was the question of whether or not the property would ever actually be developed.

“It’s easy to run out and say, I’m going to build 30 houses,’” McMahan said. “You may or may not do that. Talk is cheap. It’s easy to speculate. History is always a good guide sometimes to what is going to happen in the future, and nothing’s happened in the past to this property.”

The Barrs family has held some portions of the property for as long as 50 years but has never taken any concrete steps toward development, except for a conceptual drawing done five years ago. In fact, they turned down offers to buy from a couple of different box stores, saying those uses would not fit the character of the community, McMahan said.

If the property were to remain undeveloped, injury to its value would be minimal at best, even according to testimony from the Barrs’ own witness, McMahan said.

“I asked Mr. Robson under oath. I said, ‘Would there be injury to the value of the property if they did nothing but hold it?’ and he said there would be, but nothing substantial,” said McMahan.

The Barrs disagree with the decision.

“Some commissioners seemed to believe that property damage of $250,000 to $600,000 might not be considered substantial,” Donna Barrs said.

Why should they have to file official applications for the potential future development to be considered in the decision to approve the cell tower, Rick Barrs asked? Though some pieces of the property have been in the family’s possession for 50 years, they’ve been adding to it bit by bit over the decades, with the last piece added about 10 years ago.

“Then we had the recession. Then we had the moratorium on building,” Rick Barrs said. “Now it’s just starting to get time to do it and it’s unfortunate that the cell tower came to fruition right now, just 150 feet away from us and far away from the Zacharys.”

Commissioners did impose a couple changes to Crown Castle’s application as a condition of approval. They will back the tower site another 27 feet further away from the property line than planned. The company must also purchase the most up-to-date, quiet cooling unit available on the market in order to minimize noise emanating from the tower.

Crown Castle is now in the midst of a 30-day waiting period but will start construction sometime after that.

The coming year will likely include some further revisions to the cell tower ordinance. The Crown Castle application was a rough run for the new process, which proved to be more time-consuming than some anticipated.

Commissioners spent hours listening to attorneys argue back and forth about this site versus that one, with little changing from the opinion the county’s hired consultant handed them at the outset.

“There’s just so much room for back and forth. I think we need to focus on what is critical — the tower itself — and not worry about all the other options,” McMahan said.

However, the county’s currently got a full plate where planning is concerned, so it’s unlikely commissioners will spend much time discussing potential changes to the ordinance before summertime. In the meantime, there’s one other cell tower application — proposed for the Qualla area right by the U.S. 74 exit for Cherokee — in the queue for a hearing and possibly a few more in the pipeline.