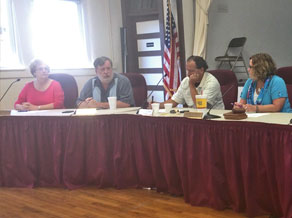 The mood was somber at Maggie Valley town hall last Wednesday as Alderwoman Saralyn Price called a special board meeting to order.

It was the first meeting of the board since Mayor Ron DeSimone died suddenly July 17 in a construction accident. Price thanked the staff, fire department and police department for all of their help and support through the unexpected tragedy.

“Two weeks ago Monday no one would have dreamed it would be the last time our mayor was with us,” she said.

While it’s been a couple of difficult weeks for the board and staff, the town’s business must continue. The mayor’s seat is up for election this year. DeSimone had signed up to run for a second term against challengers Jasay Ketchum and Justin Phillips. Since the sign-up period closed before DeSimone’s death, no new candidates can be added to the ballot.

“The No. 2 question after ‘How are y’all doing?’ has been ‘what is the town going to do and how are we going to move forward?’” said Town Manager Nathan Clark.

Without a mayor, Clark said the board had two options — appoint a mayor to serve in the position until a new mayor is elected in November or operate for the next few months with only four board members.

The law allows the board to appoint someone as mayor if there is more than 90 days until an election. The second option would allow Price, the mayor pro-tem, to conduct meetings until the election.

With only 97 days and three board meetings remaining until Election Day, all the board members said they wanted to keep the mayor seat vacant until the election.

“Of course we’d never allow town business to be unattended, and I don’t see that happening,” Clark said. “But it’s entirely the board’s decision. My recommendation is to remain a board of four with Saralyn Price acting as mayor.”

Alderman Mike Eveland agreed that the four board members could do what’s necessary to fill that void until November.

“I don’t think we need to appoint anyone to fill the position — we’re professional and we can do the job,” he said. “That’s the way Ron would have it — for us to move on. Anything that comes up, we can handle it.”

With the election only a few months away, Alderman Phillip Wight and Alderwoman Janet Banks agreed that an appointment wasn’t necessary.

“It’s important that we not interfere with the good work this board has done in the last two to four years,” Banks said. “We should let the normal election process handle it.”

Her motion to allow Price to serve as mayor until the election passed unanimously.

Even though it’s too late for a name to be added to the ballot, a member of the board or any other resident of Maggie Valley could decide to run as a write-in candidate for the mayor’s seat, but no one has announced intentions to do so.

The board didn’t mention the possibility during the meeting, but Eveland said afterward that any effort to get someone elected as a write-in candidate would need to be a grassroots effort with large community support — not a decision by the board.

During public comment, Ketchum said the town should honor DeSimone’s memory by naming the Maggie Valley Festival Grounds after him.

Price said the board would take that into consideration.

Maggie Valley resident Otis Sizemore congratulated the board for the work being done in town and the civility of the current members.

“Ron brought a lot of changes and then with new people on the board, it’s really helped,” he said. “When I first came here and came to the meetings I said it was the best show in town — they were rowdy and there was very little control even with board members. It was chaos — an absolute circus — but you folks get along together and have brought people together. Ron was a large part of that.”

Tim Lynch said DeSimone had the spirit of the community and provided a vision for that spirit.

“Without vision, the people will surely perish,” Lynch said. “It would be a great way to honor him by continuing his vision and his agenda.”