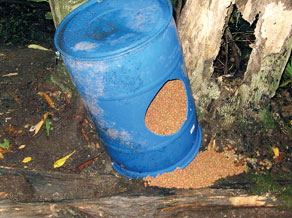 The hunting community and wildlife officers have been engaged in an ongoing tug-of-war over the practice of baiting bears to make them easier to hunt.

Hunters historically used sweets — like chocolate and donuts — but wildlife rules changed in the mid-1980s banning the use of any sugar-based food product as bait.

Hunters quickly found a loophole, however. If they couldn’t bait bears with candy, what about just feeding them candy?

“Folks said they weren’t, quote unquote, baiting bears but they were going up to Hershey, Pennsylvania, and getting huge blocks of waste candy and putting them in the woods to feed the bears,” said Kate Pipkin, Wildlife Commission rules biologist.

Hunters argued they were merely feeding the bears to make them bigger. But in reality, it was a way of skirting the law.

“It was hard to separate people who were just trying to plump up the bear population versus those that were shooting bears over pastries or letting their dogs pick up a bear trail off one of these bait piles,” Pipkin said.

It also wasn’t exactly healthy for the bears.

So the law was changed again in 2006 making it illegal to put out sugar-based food period.

“They said there is no legitimate reason to have these candy blocks in the woods,” Pipkin said.

Some hunters have resisted the new law, however, and continue to use chocolate as bait anyway — occasionally netting criminal charges when wildlife officers have been able to catch them at it.

The practice of baiting bears has historically pitted still hunters against those who hunt with dogs.

Hunters who use bear dogs can legally turn their dogs loose at a bait pile to pick up a scent trail and hopefully lead them to a bear. But still hunters that don’t use dogs weren’t allowed to hunt over a bait pile.

They claimed this wasn’t fair. Those hunting with bear dogs clearly had an advantage.

“If you are a guy in a tree stand you couldn’t sit in your tree stand over a pile of apples and shoot a bear. But if you were a person who hunted with dogs, you could release your dogs near that bear pile,” Pipkin said. “That was a source of contention between two types of hunters.”

The wildlife commission just changed the law last year making it legal for still hunters to hunt bears over a bait pile — even while they are actively chowing down on the food — but with a caveat.

“We were concerned it could increase the bear harvest too much if the still hunters were too successful,” Pipkin said. “We don’t know how many people will utilize this.”

So for now, still hunters can shoot bear over bait only during the first six days of bear hunting season until the wildlife commission can see how things go.

“In Western North Carolina, the implications of changing the baiting rules is probably negligible because most people out here hunt with dogs,” said Mike Carraway, the Haywood County-based lead wildlife commission biologist for the mountains.

There are few still hunters to take advantage of the more liberal baiting laws, although Carraway said it could encourage some new bear hunters to try it.