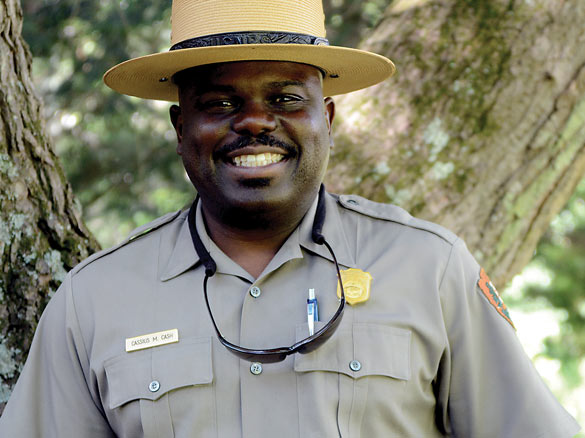 Since starting the job in February, he’s kept pretty busy. As it turns out, when you’re the new superintendent of an 800-square-mile national park spanning two states, a lot of people want to meet with you. Staff want to hear from you. There’s a litany of issues to become familiar with, an endless inventory of park sites and experiences to log.

“Being a superintendent is not just walking on the trail with a bluebird on your shoulder, whistling,” Cash said. “You have to have stamina, and a lot of people want your time.”

He’s trying to give it as much as possible.

“One of the things I take pride in is being able to build collaboration and relationships, and I think that’s one of the main reasons I was hired for this job,” he said.

Almost immediately after starting work Feb. 9, Cash scheduled four open houses — two in Tennessee, two in North Carolina — to meet with locals invested in the park. He spends about 70 percent of his time now in meetings with people both inside and outside the park and the other 30 percent “actually seeing what I’m working to preserve.” He worked three days in North Carolina over the past week, interviewing with The Smoky Mountain News, meeting with staff, touring areas of the N.C. side of the park he hasn’t gotten to yet, meeting with elected officials and hearing concerns from the Nantahala Southern Off Road Bicycle Association, based in Bryson City.

It’s not his first visit to the North Carolina side since February, and he’s turned some heads with his excursions over the state line. Earlier this summer, Cash traveled to Cherokee for a performance of “Unto These Hills.” People were quick to tell him they’d never seen a Smokies superintendent come to that kind of event before, he said.

“It’s a big organization to get to know, a lot of little towns, so I really appreciate that he gets out and makes himself available,” said Tom Sutton, Bryson City’s mayor. “Not everybody does that.”

It’s going to be a major goal of his time as superintendent, Cash said, to make the paper reality of two states, one park true in practice as well. He looks to his time in Boston — his only National Park Service job before coming to the Smokies — as evidence that he has what it takes.

In Boston, too, Cash dealt with division. He was superintendent of both the Boston National Historical Park and the Boston African American National Historical site — one park highlights the country’s founding and growth, with emphasis on sites leading up to the Revolutionary War, while the other remembers the African American community of 19th-century Boston, which birthed leaders in early struggles for equality such as the Abolition Movement, the Underground Railroad and the Civil War.

The areas told two different sides of parallel stories, Cash said, but often people who visited one left having learned nothing about the other. So, he spearheaded the effort to build a visitor center highlighting both, uniting their message.

Cash, the Smokies’ first African-American superintendent, believes the same attitude of unity will be vital in his new park.

“The way this park is told today is that on the Tennessee side we talk about the natural resources, and on the North Carolina side we talk about the families that once homesteaded here,” Cash said, but in reality each side has lived both natural and human histories. “We need to tell the story in a wholistic way from both sides.”

Best of both worlds

Cash is big into the storytelling aspect of the Park Service’s mission, but he’s also a resource-oriented guy, spending 18 years in various leadership positions with the U.S. Forest Service before starting with the Park Service in 2010. In college, he studied biology and earned a bachelor’s degree from the University of Arkansas at Pine Bluff, and he later supplemented that education by studying wildlife management at Oregon State University as a non-degree-seeking student.

“Cultural resources has become a new love of mine, but coming to the Smokies allowed me to come back to my first love, which is natural resources, so I get the best of both worlds,” Cash said.

A self-described “functional introvert,” Cash is an avid hiker, savoring time alone in the mountains to recharge. So he’s very happy to live in the land of many hiking trails, and a focus of his time in the Smokies will be to get others out enjoying them as well.

“My priority in how we move forward is, ‘What does the second century of service look like?’” Cash said.

The National Park Service will turn 100 years old next year, a milestone presenting new challenges to the park’s sustainability. As yearly visitation swells past 10 million a year — more than any National Park Service unit except the Blue Ridge Parkway and Golden Gate National Recreation Area — how do you balance resource protection with visitor enjoyment? On the flip side, how do you get a kid growing up in the center of an urban landscape — Cash’s situation as a child — to a place where they can enjoy and eventually become a steward of America’s best idea?

“You never grow from being comfortable, so it’s going to take some effort from myself and staff to go into communities that we traditionally haven’t gone into,” Cash said.

One commitment he’s made to that end thus far is to hike 100 miles of park trails in 2016, getting groups of people to join him on the adventure who represent demographics that haven’t traditionally frequented the park.

Hiking seemed a natural mode of sharing the park’s message for Cash, both because of his own affinity for the sport and because it’s treks in the woods that have formed the basis of bonding time with his daughters, 13 and 19.

“My 13-year-old can set up anybody’s tent and can out-hike me now, but that wasn’t episodic in how we introduced her to that,” he said. “It was consistent.”

Similar consistency in purpose and execution will be necessary to push the Park Service mission toward success in the future.

But on the whole, Cash shies away from making any sweeping declarations about what will define his time as superintendent or what changes he’ll be chasing over the coming years.

“I’m very intentional about resisting the temptation to make big decisions right now,” he said. With just four months on the job, it would be “premature to say what the next steps are.” Instead, he’s focusing on hearing from his staff, hearing from the communities and getting a good feel for the park and its issues before trying to work on any kind of plan.

For instance, when asked about problems such as increased traffic and road damage in Cataloochee Valley or the expansion of elk herds beyond park borders — and the damage they can cause to farms and gardens — he had to take a raincheck on giving a definitive opinion.

“I think the support of our gateway communities for this park is ummatched,” Cash said. “A lot of folks love this park.”

That was his immediate impression upon arriving in the Smokies, and he believes it will be key to addressing a long-standing issue between park communities — the disconnect between the North Carolina and Tennessee sides of the park. There’s long been a sentiment in North Carolina towns that they’re seen as the lesser of two regions, that “The Smokies” is heralded as a Tennessee thing with North Carolina shoved to the side.

Cash acknowledges that the perception exists, and also that it will take more than a day’s work to overcome it.

“I hear that comment,” he said of the perception in North Carolina, “but I guess the only thing I can do is be there and show up.” He plans to respond to invites, get into the nitty-gritty of learning the resources, learning the community and working toward unity.

“This park cannot move forward without the support of our community, and the communities over in North Carolina are just as important as the ones in Tennessee, so that’s one of the things I’ll have to show more than talk about.”

A Memphis native, Cash is excited to be back in what he considers his home region and expects to stay around for the long haul to drive that point home.