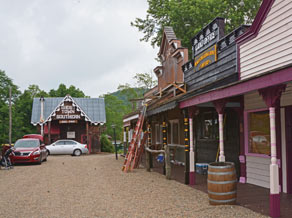 After lying dormant for the winter, Ghost Town in the Sky was once again showing signs of life last week with preparation work under way for a July 2 season opener.

The A-framed chalet-style gift shop along Soco Road was buzzing with activity — a woman behind the counter fielded queries on the phone about opening day and employees were in and out asking about ordering supplies and scheduling inspections.

It was another beautiful day on top of Buck Mountain with a clear view of the valley from about 4,000 feet. Mechanics worked on the chairlift and the three kiddie rides still in operation. Ladders and paint cans lined the old Western Town while hired hands worked to get the shops and saloons ready for summer guests.

Even though a lot of work was going on to get the park ready to open, some areas looked like they haven’t been touched in years. The condemned roller coaster sits to the left as you reach the top of the chairlift; grass grows up over the fencing and through the cracks in the pavement; and the remnants of amusement park rides continue to rust on the third level of the mountaintop park.

Since purchasing the western-themed amusement park out of foreclosure in 2012, owner Alaska Presley has attempted each year to start the season on Memorial Day weekend, but each year she seems to hit a number of obstacles that push the opening back to July 4 weekend.

From day one, Presley’s goal has been to restore Ghost Town to its original glory. In the 1960s and 70s the theme park attracted thousands of visitors on weekends. She and her late husband invested in the park when it first opened, and she helped the last owners make payroll when the park was about to go bankrupt. With so much invested, Presley thought, “Why stop now?”

She has spent most of her money in the last several years on Ghost Town projects she didn’t anticipate, including constructing an emergency evacuation route underneath the chairlift in 2013 per the North Carolina Department of Labor and finally getting city water piped up the mountain this year.

No matter what the setbacks, Presley has been determined to open one way or another. Given the time and money she has invested in the mountain over the years, she wants to see it through.

“I’m just not ready to give up on it yet,” the 91-year-old said during a recent interview.

John Collins, an evangelist minister, will be managing the Western Town portion of the park this year and has been doing maintenance on several of the buildings.

“I think it looks as good up there as it has in 30 years,” he said. “I think people will be pleasantly surprised.”

This is the first year Presley has leased out the Western Town to someone else in exchange for a portion of the ticket revenue. In previous years, a general manager has helped her run the entire park. Local real estate broker Chris Chagnon managed the park last year, but he doesn’t have the time to devote to it this year with his own projects in the works.

Collins’ experience mostly consists of preaching and organizing revivals, so Ghost Town will be a new kind of venture for him. However, he will be preaching at Sunday services at Ghost Town.

He said guests could look forward to bigger and better gunfights, including a 12-minute gunfight at high noon like Ghost Town had in the 1970s. He said there would be face painting, caricature drawings and even camel rides to add to the “wholesome family fun” that Ghost Town is known for.

Collins also plans to bring in popular gospel and country artists to provide entertainment at the saloons throughout the summer. Named Evangelist of the Year in 2014 during the Inspirational Country Music Awards by the Faith, Family and Country Association, Collins said he has many contacts in the country music business. So far he has gospel singer Bart Fortenbery lined up to play on opening weekend and country singer Davis Daniel the following weekend. He said that is just the beginning of the big names to come.

“These will be country music singers you turn on the radio and can still hear today,” he said.

Piano man Joe Ford will once again return to the saloon to entertain along with his Can-Can Girls, and Ranger Buck, Ghost Town’s cowboy mascot, will be patrolling Western Town as always.

Collins said his family had deep roots in Haywood County and he has many fond memories of Ghost Town. But it was Presley’s plan to construct Resurrection Mountain — a Christian theme park — that made him want to get involved.

“God led me here … I heard about the cross and contacted Alaska,” Collins said. “As a pastor, I thought it was a great idea and wanted to be a part of it.”

Resurrection Mountain would be located on the very top level of Buck Mountain, the spot where Ghost Town used to have amusement park rides for adults. It would walk people through the life of Jesus Christ from birth to resurrection. Presley’s hope is to have a cross on top of the ridge that will be the highest cross in the western hemisphere.

There are still uncertainties, though, when it comes to how high the cross can be because of the state’s mountain ridge law. Town Planner Andrew Bowen said the town of Maggie Valley couldn’t approve anything until it receives a letter from the state saying that the proposed cross would be in compliance with the ridge law. Otherwise, the town could get tangled up in a lawsuit with the state.

Coming back or fading away?

Since opening in 1961, thousands of families have created happy memories at Ghost Town. Parents and grandparents want their children and grandchildren to experience what they experienced as children.

For the last couple of months, Ghost Town’s Facebook fans have been asking if the park would open this year with no response. They are excited to bring their families to Maggie Valley.

The reality, though, is that Ghost Town is not what it once was 30 years ago, and some are venting their frustrations.

Reviews on TripAdvisor from people who visited the park last year reveal that many were not pleased with their recent visits despite their excitement for nostalgia. Amy Delling warned people to stick with their memories and not return to Ghost Town.

“We have visited Ghost Town several times before and always enjoyed our time here. This was not the case on this visit. Everything is in such disrepair! The three children’s rides that are left, had no employee to man the rides,” she wrote. “In the past, we could spend an entire day here. Today after about an hour, we had seen all that there was to see. Very saddened to see the park this way.”

Other reviews praise the beautiful views from the top and seem understanding that Presley is trying to revive the park, but they also mention high ticket prices and poor entertainment.

“I hear countless tales of recounted memories about prior visits to Ghost Town and how they want their children or grandchildren to have the same experience,” she said.

But it’s hard to know what to tell people, especially when she hadn’t heard any official announcement from Ghost Town until last week.

Maggie Valley Mayor Ron DeSimone said he is asked about the status of Ghost Town everywhere he goes and he really doesn’t know what to tell people. At one time, all of the businesses in Maggie Valley relied on Ghost Town to bring in tourists, but that’s just not the case anymore.

Phillip Wight, a town alderman and owner of Clarkton Motel, said there are still families that plan their trips around coming to Ghost Town, but not as many as there used to be because the park doesn’t advertise anymore. While it may not be the cash cow that it used to be, Wight said, “I’ll never lose faith in the mountain.”

Better communication from Ghost Town might help the situation. Town leaders would like to be informed of a cohesive plan for the park and how it will be executed, but it seems to be a moving target.