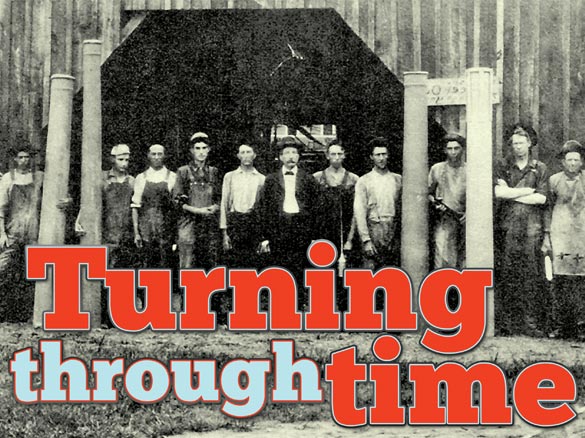 The furniture manufacturer remembered as Carolina Wood Turning Company has been closed for more than 30 years, yet the smell of freshly cut wood and the sound of the steam whistle are still fresh in the minds of those who earned a living there.

The Bryson City business had many names throughout the years and made a number of different products, but its lifeblood was making furniture from Western North Carolina lumber. The company made wood pump tubing, tanners’ liquor logs and miscellaneous wood trimmings and solid bored colonial porch columns that can still be seen on older homes in Swain County.

“It was the mainstay employer for the area at the time, and not just for people working at the plant, but it provided jobs for loggers because a lot of the raw material came from Western North Carolina,” said Don Casada. “It provided indirect support for those families through all my growing up years. It put bread on the table for a lot of families and put their kids through school.”

Casada has been researching the company and trying to locate former employees and their families in preparation for a reunion planned for May 9 at the Almond School in Swain County. The company averaged about 200 employees throughout its history, but many of them from the early years aren’t around anymore.

While Casada has an interest in historical people and places, he also has a personal interest in the company’s history because his father, Commodore Casada, worked at the plant for about 50 years before retiring in 1975.

“Dad always said he started out there with the greenest hand that ever was,” Don Casada said.

“He got the job because they had a baseball team and they wanted him to play,” Don said. “But he managed to hang on after baseball season was over.”

Commodore held a number of jobs during his time with the company, including foreman, plant superintendent, personnel manger and purchasing agent.

Even Don spent a summer working at the plant while he was in college. His job entailed smoothing the dimples out of the furniture with steel wool when pieces came into the finishing area.

“It was the worst job I ever had,” he said with a laugh.

A few weeks later he was moved to the shipping area to box up the furniture. The physical labor was a welcome change from rubbing down furniture all day.

“One of the most memorable things was the steam whistle. It blew at noon and people set their clocks by it — you could hear it all over the valley,” Don said.

“Even today if I’m working on wood or carpentry, the smell of fresh-cut wood brings back those memories.”

Casada dug up an Asheville Citizen-Times article from Jan. 27, 1913, that provided a little insight into the industrial progress being made in Bryson City, and Pump Works was a big part of that progress:

“Bryson City now owns its electric light and power plant and is making special efforts to land manufacturing industries. The water supply is one of the best in the state and a good fire department has been organized. Sewer lines have been laid in the principal streets of the town and a good band has been organized to give summer concerts. The Bryson City Pump Works, which manufactures columns and liquor logs, is now running day and night in order that it may keep up with its orders, the output being shipped to all portions of the United States.”

Another article from 1921 pointed out that Pump Works was unique in the fact that it was the only manufacturer making columns from solid logs. The same article attributed much of the city’s progress to Shank’s company as the products were in high demand all the way to Massachusetts.

The business became Carolina Wood Turning Company in 1925 and relocated from 100 yards northeast of the railroad depot to the north bank of the Tuckasegee River, about a mile below town.

Shank retired in 1928. He had four daughters, and his grandson I.K. Stearns took over as president of the company. One of Shank’s daughters, Jessie, never married and worked for the company for a number of years.

During World War II, the company halted furniture production to be part of the war effort.

Delia Woodard Watkins, 89, of Bryson City, remembers going to work at the plant in 1944 while her husband was away at war — as were most of the eligible men in Western North Carolina. She was only 19 years old and her firstborn was just a month old when her husband Raymond Watkins went off to war.

Watkins would leave the baby with her sister and mother in the evenings while she walked to the plant to work the second shift. There were a handful of other women who also went to work there during the war, but Watkins said there were more women at the plant years later when Magnavox bought the business.

“We were making something they were using in the war — something you put gunpowder in,” she said. “It was a little round thing and there was a big knife that cut them — it was like a little round barrel.”

She didn’t consider it hard work, but speed was important as the pieces came down the line. She made $15 a week in addition to the $100 a month from the Army. It wasn’t a lot, but she said they got by just like everyone else did during that time. Watkins’ brother-in-law also worked at the plant while bringing up 10 children at home.

Before and even after the war, Watkins said Carolina Wood Turning was an important industry in the county. Most people she recalls worked there at some point or took their wood there to be cut into lumber, including her father, who was a farmer. Her husband worked there before the war and her brother-in-law was a guard at the plant during the war.

Besides a couple of other manufacturers that came and went through the first part of the century, Watkins said the only other jobs were at the grocery store, the dime store, the drug store or a sawmill. That’s why it was so important for families to live off the land. The Woodard family had a 300-acre farm in what is now part of the Great Smoky Mountains National Park.

“We were self-sufficient — we had nine children in my family and we had horses and mules and milking cows and chickens and we had an orchard,” Watkins said. “We really only bought flour and sugar.”

“The best part of Swain County is in the park — all the farming land,” she said. “That was the change — hundreds of people lived in there and had to move out, and most moved to another county to work.”

While the community considered Carolina Wood Turning Company a good place to work, Casada said the wages weren’t great by any means. In his research, he discovered the union workers (International Wood Workers) went on strike at least twice — once in 1947 and again in 1957 — most likely over pay and benefits. Casada’s father Commodore was superintendent during the 1957 strike.

“It was a very stressful time for him,” he said.

Robert Hurley, 83, of Bryson City, worked at the plant for 28 years. He was just out of the Army in 1958 when Commodore Casada hired him at Carolina — the same place his father had worked. He made $1 an hour in the early years and brought home $38 a week, but somehow it was enough to buy a home and support his family.

“There weren’t too many jobs at that time — the economy was pretty good and it  didn’t seem that bad,” he said.

Reflections like Hurley’s indicate a different time and a different mindset among people in the region. Casada said no one knew they weren’t well off in those days because everyone else was in the same boat.

“My parents were far from wealthy, but we lived comfortably growing up in this area. There was very little in a sense of class and very few were well-to-do,” he said. “We got our first TV when I was 13 years old, but I wouldn’t trade growing up in that time period for anything in the world.”

Hurley held a number of jobs at the plant and moved up within the company from a machinery operator to a mill room foreman — a position he held for 14 years. In 1966, Carolina Wood Turning merged with Magnovox and expanded their products to include television and stereo cabinets.

As the company grew, more women were hired at the plant for bookkeeping, accounting and production work. Hurley said there were just as many women as men working there in the 1970s.

Hurley served as president of the local wood workers union during his time at the plant and said he was lucky not to go through any strikes.

“Everyone knew what they wanted and wanted to avoid a strike,” he said. “At the time, unions were a good thing.”

Magnavox sold the company to Singer in 1973. Singer would be the final owner before the plant shut its doors in 1978. Hurley was there until the final days.

“It was happening gradually,” Hurley said of the closure. “First they shut down the logging mill and the furniture was shipped in to us. Then the molding was also coming in and just needed to be sanded.”

With less work to be done, workers waned as needed.

The gradual shift mirrored the greater shift in Bryson City. Hurley said the town was gradually moving to a tourism industry with the popularity of the national park. Cherokee was also picking up steam as a tourism destination, and the train began offering excursions in the late 80s.

Hurley said it was a hard thing to see the company close. Many of the younger workers moved out of the county to find better jobs, while workers with families searched for other work in the area. Hurley found work at the Gichner plant, a prefabricated metals manufacturer located where ConMet is now. When that plant closed, he worked as a jailer for several years before retiring.

Casada said ConMet, which produces components for commercial vehicles, was one of the few manufacturers holding on in Swain County. ConMet is No. 4 on the list of the largest employers in Swain County. Local government, Nantahala Outdoor Center, the National Park Service, Great Smoky Mountain Railroad and other tourism businesses make up a majority of the other jobs.

“This area — throughout my life — has been heavily tourist-oriented and certainly more so now,” Casada said. “The biggest employer is the county, which is not a desirable thing in terms of economic conditions.”

Overall, past employees say it was a good and steady place to work even through all the changes. The company owners were community-minded, and news archives show numerous donations to the schools and civic organizations. Employees made quality products that are still around today, including pieces of furniture and the iconic posts made from local wood.

• History presentation and potluck dinner open to the community

• Arranged by Dee Decker and the Swain County Extension Office

As told by Robert Hurley

• Logs brought into the sawmill on trucks.

• Logs pulled through the pond to clean.

• Logs hooked onto a mule or horse and pulled along to air dry.

• Lumber brought into the mill room to be cut for specific furniture orders.

• Cut pieces move through the trimming or molding process.

• Pieces sanded down and moved into the assembly room.

• Furniture packaged and shipped all over the country.