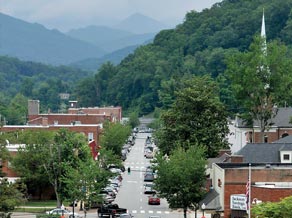 Town commissioners are once again mulling over the question of two-way traffic in downtown Sylva with the conclusion of a traffic study from Waynesville-based J.M. Teague Engineering this month.

Reuben Moore, a consultant for the company who also explored the issue in 2014 when he worked for the N.C. Department of Transportation, presented the 44-page document at last week’s town meeting. In a sense, commissioners’ consensus was clear in that there will need to be a lot more thought and public input invested in the idea before a consensus can emerge.

But in another sense, opinions varied.

“I think there’s some advantages to having a two-way Main Street,” said Mayor Maurice Moody, though qualifying such a change would be expensive and slow traffic down.

“I think the idea is well worth the study,” he added, “so I think now we just have to continue with our homework and see what we can come up with.”

On the other hand, Commissioner Mary Gelbaugh said she’s having a hard time seeing how such a plan could work.

“I am trying to be objective when it comes to the two-way traffic study, yet after hearing last night’s presentation, I cannot see it working,” she wrote the day after the meeting. “Vehicles are much larger now, delivery trucks are a must to these small businesses and Main Street is a primary road, not secondary. While tourists may be able to better marvel at our library, safety is more of a concern to me.”

Currently, Main Street traffic travels eastbound, away from the historic courthouse-turned-library, and the building is not very visible from westbound Mill Street. The town thinks it would be better for tourism to be able to see Sylva’s crown architectural jewel while driving through downtown, but that’s far from the only reason to investigate the feasibility of two-way traffic on Main Street.

“We looked at case summaries from other locations that have converted streets from one-way to two-way,” Moore said, “and in all cases we found that the economic livelihood of the downtown increased, that the business community was happy with the effect of the two-way street.”

Two-way travel allows people to access businesses from either direction, and it means that storefronts angled so as to be less visible to eastbound travelers, for instance, will be seen by westbound travelers. Two-way traffic can also be better for pedestrians, Moore said, because when traffic travels in two directions at once it tends to move more slowly, which can make walkers feel safer.

The benefits of two-way traffic are attractive enough that Sylva has revisited the idea several times since Main Street first converted to one-way travel in the 1950s. The DOT conducted a study on the topic in the 1970s, again in 1996 and met with Sylva once more on the issue in early 2014. In that meeting, the town was instructed to get an opinion from a traffic consultant, Town Manager Paige Dowling said, which is what the current study is. Sylva paid $10,000 for the study along with funds from a $10,000 grant from the Southwestern Commission.

But every time Sylva has looked into two-way traffic so far, something has thrown on the brakes. This is no exception.

It’s possible to do, Moore said. The question is whether it’s practical.

The main issues are cost and efficiency. The final report pegged the cost of converting to two-way traffic at $75,000, but that was before the DOT decided that, were they to approve the project, the town would need to install a left turn lane at the intersection of Main and Mill streets as well as install new signal poles and arms at intersections. Those two requirements would bring the price tag up to an estimated $375,000.

That makes it a much more expensive project than originally conceived, but even with those additions it’s not certain that DOT would approve it.

“The delay going through town would be close to double what it is now and congestion would be about a 75 percent on average increase,” Moore said. “I think the DOT will probably look at it and say, ‘Boy, that’s a pretty big increase.’”

Though all statistics and case studies point to two-way traffic as medicine to create a bustling downtown, merchants interviewed for this story didn’t come across as cheerleaders for the idea. By and large, they were cautious about expressing too strong an opinion either way and overall seemed more concerned with parking availability than any potential reroute of downtown traffic.

“I think it would be better to be able to drive down to see the courthouse,” said Betty Gates, owner of B&B Gifts and Interiors. However, she was worried about whether Sylva’s side roads could handle the overflow traffic and made clear that “The parking is the main thing that I worry about.”

Parking was also the main concern for Sheryl Rudd, president of Heinzelmännchen Brewery. Heinzelmännchen is on Mill Street, not Main, so if westbound traffic did not have to use Mill Street exclusively, businesses on that street could have less exposure. Rudd wasn’t too worried about that — “people seek us out because of the kind of business we are” — but said her customers hate parallel parking. When one lane of Mill Street closed and become angled parking after a fire damaged several downtown buildings last fall, good things happened.

“Having angled parking was just huge,” she said. “It made it lively back here.”

Shannon Messer, manager of the Orvis fly fishing store at Blackrock Outdoors, agreed that more traffic on Mill probably helps out the fly shop, which opens to Mill. But because Blackrock has entrances on both Main and Mill streets, he doesn’t know that — in terms of business, at least — it will much matter whether traffic goes to two-way or stays one-way.

Bernedette Peters, on the other hand, who owns Perk and Pastry as well as City Lights Café, saw another side of the lane closure on Mill Street.

“When backstreet [Mill Street] went down to one lane because of the fire and the construction, we got a taste of what it would be like to have that be one lane,” she said. “There were more people that rerouted themselves around, and that hurt business.”

Peters, a member of the town’s traffic committee, is well aware of the statistics that say that two-way traffic is good for downtowns. But she questions how true that will hold in a town like Sylva, where downtown is sandwiched between two mountainsides and side streets, which could help take away some traffic pressure, are virtually nonexistent.

“We’re a hot dog bun,” Peters said. “We’re in the bun and there’s really not a lot of alternate routes, so it’s good and bad. People have to come through here but at the same time you’re landlocked.”

There are still a lot of what-ifs in the equation. How will drivers adjust their routes if the traffic pattern changes? Will the projected cost change? What would be the net effect to parking capacity? Will the town board decide to move forward and will the DOT OK that decision?

Moore’s advice is simple: if downtown’s economy is in rough shape, this could be a simple way to lift it up. But if things are somewhere above the level of economic distress, the town would probably be better served to step back and come up with a more comprehensive traffic plan for downtown seeking a higher-dollar budget.

But that decision will lie with the town board, and their choices, Moody and Gelbaugh said, will come from a community-wide conversation.

“This is a decision, I really think, that needs to be made by the public,” Moody said.