From end to end: Against ATC wishes, thru-hikers summit Katahdin 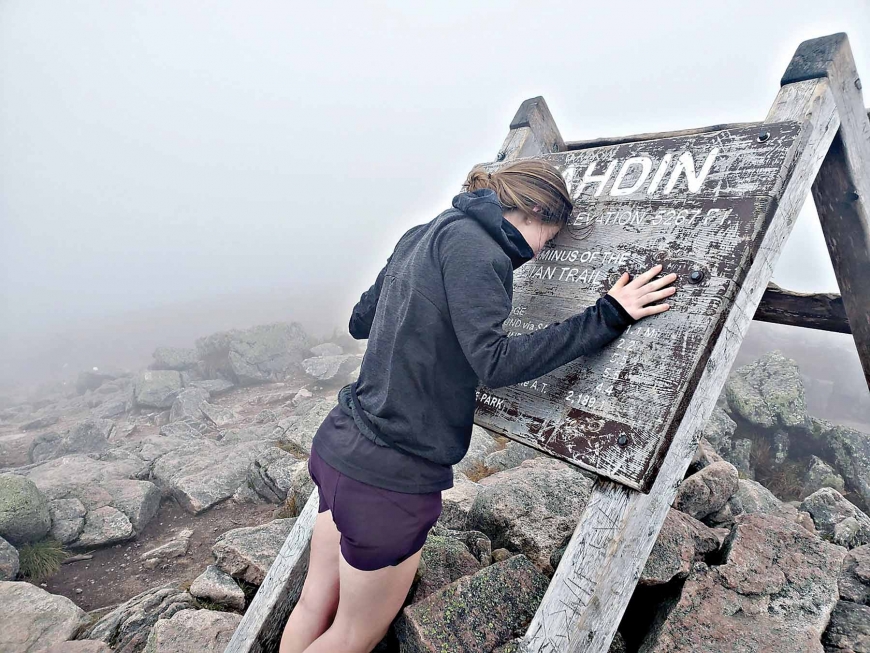 When Karly Jones began the Appalachian Trail on Feb. 27, the weather was cold and the trail crowded. She quickly earned the trail name Jitter, short for jitterbug.

“I was constantly moving to try to stay warm, so I would hop from one foot to another and rub my hands together or jump around, or anything to keep warm,” she said.

As February turned into March, Jones climbed Springer Mountain, traversed Neels Gap and then Dicks Creek Gap, summited Standing Indian Mountain and made her way through the challenging terrain of the Great Smoky Mountains National Park. That’s when she first heard about COVID-19, from a group of pre-med students who had just been notified that their classes would be canceled for the next two weeks. By the time she reached Hot Springs, the world had changed.

“That was when a lot of people were making decisions and plans to go home,” she said. “I significantly noticed it.”

Northbound in a pandemic

The trail emptied out fast, but Jones decided to stay. She had started the trail before the virus struck, so she figured she wasn’t a carrier. The A.T. felt safe to her.

Besides, Jones was only 20 days into her thru hike, and she wasn’t ready to leave. At 26, hiking the A.T. was a dream she’d had since childhood, and this was her chance to do it. Her husband, a member of the military, was being transferred to Germany after being stationed in Fayetteville. Jones had quit her job early to do the trail and planned to rejoin her husband in Europe after reaching Mount Katahdin.

“If I was going to do it, I wanted it to be now versus trying to come back after retirement like so many people do — which is great for them, but I don’t know if I would be strong enough to do it at that point,” she said.

Jones wasn’t the only hiker to stick with the trail despite the pandemic. However, she was in the minority. In a typical year, thru-hikers report crowded shelters and populated trails. Jones, meanwhile, could go days without seeing another human being. She only camped out solo a couple nights out of the entire five months, but that’s because she made plans with other hikers to end up at the same place for the evening. If she hadn’t, she would have wound up alone most of the time.

“The weird thing is I have nothing to compare it to,” she said. “This was my hike. I’m sure it was very different in past years, but I don’t know that because I didn’t hike it in past years.”

While she never quit the trail, she did take a break from it — and the pandemic was responsible for that.

“What I did do when I heard about it (the pandemic) was I packed a ton of extra food because I wasn’t sure what resupply was going to look like, and that in turn aggravated a hip problem I had,” she said.

It was extremely painful and “kind of threw me on the ground a couple of times,” she said. The trail was empty, and she was afraid that if she fell, she’d be stuck for a long time before someone found her.

“Eventually someone would come along,” she said, “but how long is ‘eventually?’” 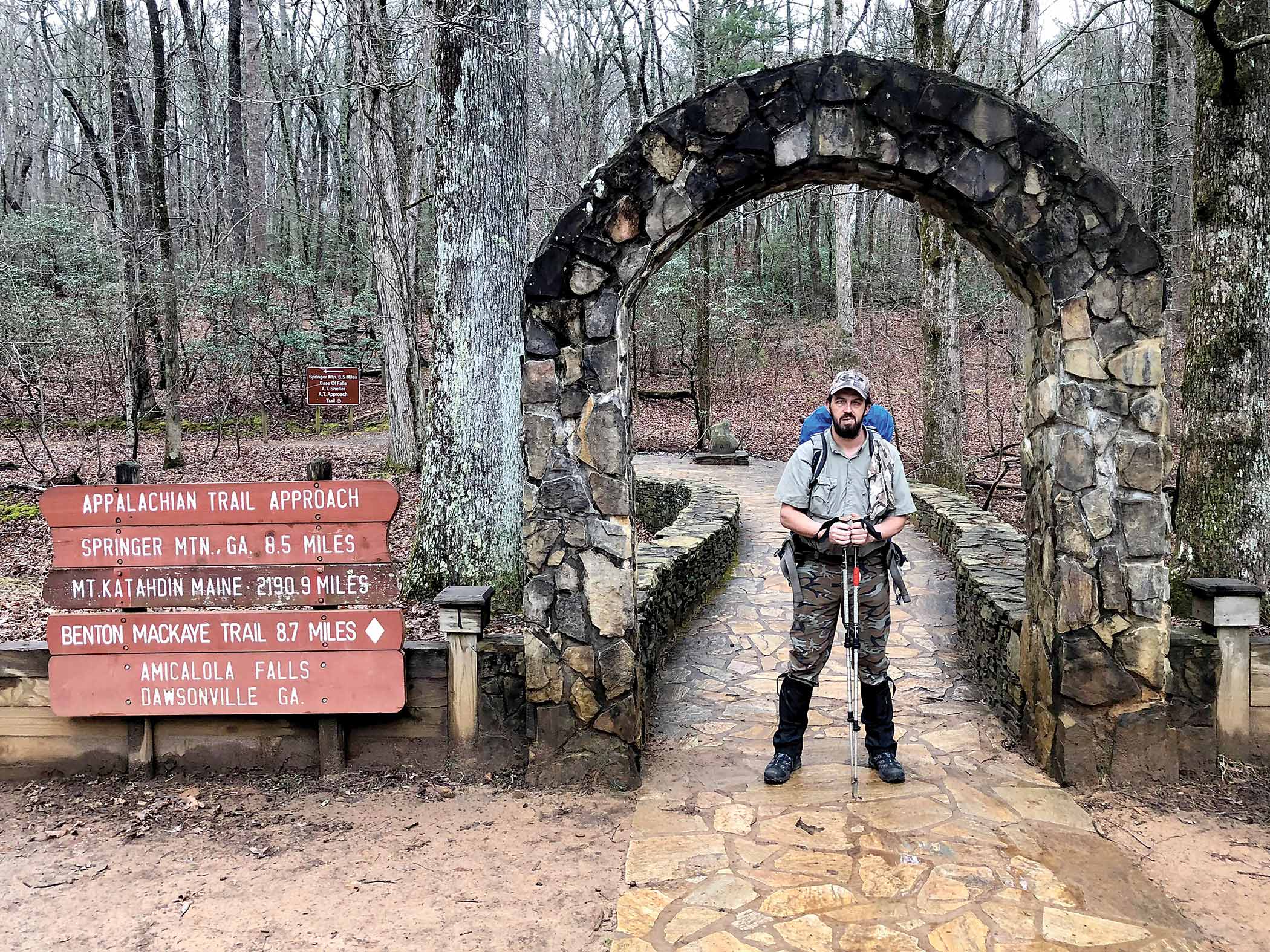 Robbinsville native Davey Williams arrived at Springer Mountain less than a week after Jones, starting his A.T. hike on March 3.

As for Jones, hiking the A.T. was a lifelong dream for 43-year-old Williams. The trail passes near his residence in Graham County, and he grew up walking the A.T. and meeting the thru-hikers who travel it. The trek took on new significance to Williams in 1996, when his lifelong visual impairment developed into a retinal detachment that left him legally blind.

“I used to ride horses and camp when I was small, and once I had retinal detachment in ‘96, the doctors made me quit riding horses. So, I started hiking,” he said.

Since 2015, Williams has attempted a thru-hike every year, but the farthest he’s gotten thus far is to Interstate 40 coming out of the Great Smoky Mountains National Park. This year’s hike was the shortest of all. He got on the trail March 3 and was home by March 4.

Williams had a “little bit of a head cold” when he left home, and within 24 hours he was feeling quite sick with symptoms that closely aligned with those of COVID-19. There’s no way to know for sure if he had it — no tests were available in Robbinsville at the time — but the nephew and brother-in-law he was hiking with both turned in negative test results after getting home to the Charlotte area. Regardless of whether he had COVID, he was too sick to hike, and recovery took time.

Nevertheless, Williams isn’t giving up on his A.T. dream.

“One of the reasons I want to hike is because everybody says I can’t — ‘You’re legally blind; you need to be at the house sitting on the couch.’ Well then, I throw it back at them. Bill Irwin hiked,” said Williams.

Bill Irwin was the first blind person to thru-hike the A.T., an adventure he describes in detail in his 1991 book Blind Courage. Williams had the chance to meet Irwin in 1990 while he was passing through Graham County. He and his dad gave Irwin a ride into town. The encounter still inspires Williams, especially since dealing with the effects of retinal detachment. As soon as he recovered from this spring’s sickness, he started walking, getting fit and strong in preparation for 2021.

The fate of hundreds of other Appalachian Trail adventures launched this year was decided via hundreds of individual decisions like Jones’ and Williams’ — but also through guidance from the Appalachian Trail Conservancy, the nonprofit organization tasked with managing and protecting the trail.

Since the pandemic began, the ATC has strongly discouraged thru-hikers from continuing their journeys, on March 31 announcing that any such hikers still on the trail after that date would not receive ATC recognition for completing the hike.

“It just didn’t seem fair to the many people who got off and cut short their perhaps once-in-a-lifetime trip on the Appalachian Trail as thru-hikers,” said ATC Regional Director Morgan Sommerville.

Many thru-hikers heeded the ATC’s advice. Results of a survey sent to hikers who registered with the ATC for a 2020 thru-hike show that 40 percent of respondents didn’t start their planned 2020 hike at all and another 41 percent had started to hike but got off before March 31. The survey had a 46 percent response rate.

Jones said that the ATC’s announcements did little to discourage her hike. If anything, they had the opposite effect.

“I guess I felt like they thought they could control people based off of their recognition, and I just didn’t agree with that,” she said. “I’m disappointed in the way they handled it.”

She had to get off trail for a bit to deal with her hip issue, but Jones said she made it a point to stay on until after the ATC’s March 31 cut-off — she paused her hike on April 2 and resumed it mid-May. On Sept. 10, she summited Mount Katahdin, a feeling that she can only describe as “incredible.”

“I don’t think I’ve fully wrapped my head around it yet,” she said.

Williams, meanwhile, said he would have gotten off the trail even if sickness hadn’t forced him to. It’s such a long hike and it goes through so many different states with so many varying levels of infection — it was probably for the best that he was forced to drop out early, he said.

Sommerville said that the decision wasn’t about control — it was about safety.

Initial information about the virus indicated that it could be transmitted easily via aerosol particles, through surface contamination and possibly through fecal matter. Taken together, that meant that camping — especially in shelters with privies — would be quite risky. Additionally, local trail communities were nervous about the potential of a steady stream of thru hikers to spread the virus to their residents, and trail clubs didn’t want to expose their volunteers to the virus. Many A.T. communities joined the ATC in asking the federal government to close the trail completely.

Asking hikers to get off the trail wasn’t something ATC staff took lightly, said Sommerville. Sommerville is a thru-hiker himself, and he knows exactly how it feels to have a thru-hike interrupted. He’d hiked all the way from Georgia to summit Mount Katahdin in Baxter State Park when he found that the park was closed due to wildfire. It was two decades before he finally completed the hike.

This year, the A.T. was never closed in its entirety, but many sections, trailheads and access roads were. Some still are, and many states, especially in New England, still require visitors to quarantine upon entry.

“It’s pretty difficult to comply with that if you’re thru-hiking,” said Sommerville.

Therefore, the ATC continues to withhold recognition from 2020 thru-hikers and asks backpackers to refrain from crossing state lines. Backpackers are also asked to bring a trowel to bury their waste instead of using privies and to stay away from shelters, using tents or hammocks instead.

It remains to be seen what 2021 will hold; Sommerville said the ATC hopes to issue an announcement by the end of the year. In the meantime, most hikers whose plans were derailed by the pandemic seem eager to resume their trek. In a survey question answered by 784 people who paused or postponed their hike this year, 58.8 percent said they plan to resume it once conditions allow.

“We’re hoping for the best but planning for the worst,” Sommerville said.