Top to bottom, prognosis for NC economic recovery is good 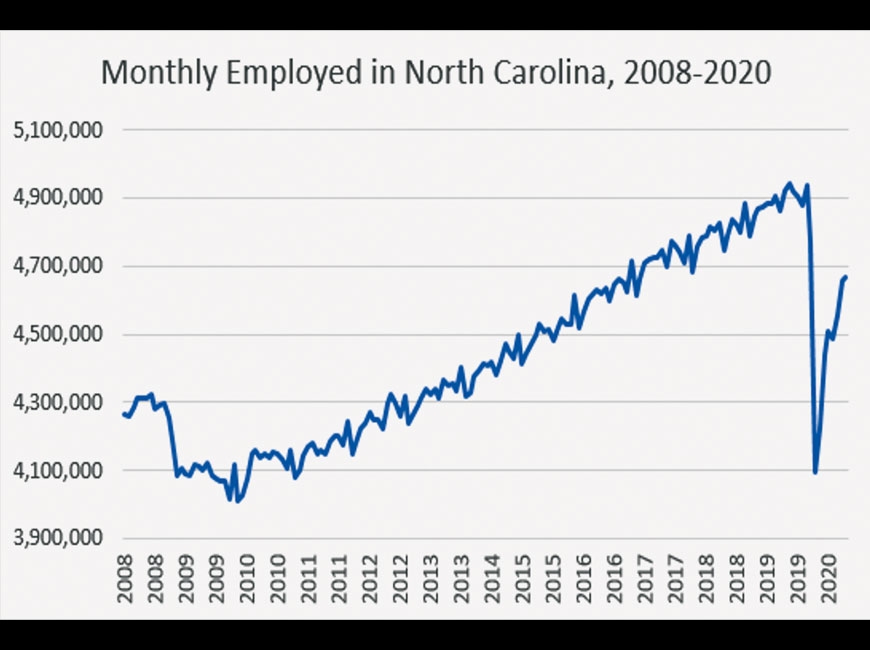 Pandemic-induced unemployment levels have diminished rapidly, according to a report issued by a Western Carolina University economist. WCU Center for the Study of Free Enterprise photo

North Carolina’s fiscal and economic health, along with years of budgetary discipline and a commitment to economic freedom, bode well for a sustained long-term economic recovery so long as policymakers continue prudent decision making — particularly in regard to worker regulations and market restrictions.

That’s the conclusion of a new report issued by Western Carolina University’s Center for the Study of Free Enterprise and its director, economics professor Dr. Edward J. Lopez.

“This study is looking at the long-term,” said Lopez. “When it comes to the long-term, it draws our attention to things that are not immediately on the surface, but are more like fundamentals on the structure of the economy.”

Although the outlook is rosy, the current situation is still fragile. The report , part of the CSFE’s COVID-19 Research Initiative, was funded by a grant from the North Carolina Policy Collaboratory. In focusing on the long-term, it doesn’t address current coronavirus-related drags on the economy but instead envisions a time when economic activity isn’t affected as much by the pandemic.

During 2020, net job growth was just 1.1 percent, the lowest since the state was attempting to claw its way back from the Great Recession of 2008. As of last December, there were still 200,000 fewer workers employed than the pre-pandemic average of about 5 million. SNAP recipients grew by 20 percent from February to August, 35 percent of households are having difficulty meeting expenses and almost 20 percent say they are late on rent.

The report, co-authored by CFSE policy researcher Emma Blair Fedison, argues that top-down solutions are not alone sufficient to foster economic prosperity. Fedison, originally from southwestern Virginia, will soon have her master’s degree in economics from George Mason University.

“Thankfully, both of those perspectives look pretty good,” Fedison said. “Coming into COVID, North Carolina had a pretty good top-down position because they have built themselves into a good fiscal position coming into the pandemic in regard to how they have formed tax policy and how they have been somewhat conservative in their spending.”

At the onset of the pandemic, North Carolina’s pocketbook was in good shape for just such an eventuality. There was more than $1.2 billion in the “rainy day” fund, almost $3 billion in the unemployment insurance fund and another $1.5 billion stashed among the state’s various departments. That’s better than 36 other states, according to the report.

At least some of the credit for that goes to Sen. Kevin Corbin, R-Franklin. Prior to joining the N.C. Senate earlier this year, Corbin served two terms in the N.C. House. When he arrived in Raleigh for his first House term in 2017, he began conversations with appropriations chair and Wake County Republican Nelson Dollar, a college classmate at Appalachian State, about establishing a rainy-day fund. That led to Corbin co-sponsoring the bill that made it a reality.

“The best way I can describe this to people is, you may look at your checking account right now and you’ll have $1,000 in it, but you’ve got a car payment coming up, you’ve got a house payment coming up, so that money’s sort of spoken for,” Corbin said. “You’ve got a little running balance. The state, I want to say we had a couple million dollars running balance but it was money coming in and money going out. We didn’t have any savings.”

Corbin said that the fund grew to around $2 billion before some of it was used for hurricane relief in the eastern part of the state. By the time COVID-19 hit almost a year ago, the fund was back up to about $1.4 billion.

North Carolina’s commitment to economic freedom over the past decade has also fostered a good business climate in the state. “Economic freedom” is a quantifiable term based on how government policies affect markets and is based on Adam Smith’s seminal 1776 work, Wealth of Nations . In it, Smith postulates that leaving as much of the population as free as possible inevitably results in greater personal empowerment, economically speaking.

Since Republicans took control of North Carolina’s General Assembly in 2010, that score has steadily increased almost to all-time highs, as of 2018. Georgia, Tennessee and Virginia all score slightly higher than North Carolina.

All score well above the national average, but in North Carolina Lopez and Fedison say there are some areas for improvement in “blatantly anti-competitive” policies regarding market entry restrictions, price restrictions and occupational freedom that inhibit bottom-up solutions.

“On this perspective of bottom-up growth, the conditions for growth really matter,” Lopez said. “And what does that look like? It’s individuals, it’s couples starting out their lives together. It’s households taking chances, starting businesses, maybe moving into a new career and all along the way bettering themselves and doing the types of things that lead to long-term growth and prosperity.”

Specific areas for improvement in market entry include rehashing certificate-of-need laws for medical facilities, a review of occupational licensing, and re-examining the strict rules governing the distribution and pricing of alcohol, gasoline and other retail goods.

As Western North Carolina’s greatest economic driver, the economic health of Asheville has a ripple effect from Swannanoa to Swain County, and all points in between.

“Asheville is really the crossroads and the gateway to what is west and north of it, including the western counties of North Carolina,” Lopez said. “If you think about the movement of labor and businesses and resources, the things that make up economic activity, if we’re doing it in Western North Carolina, most of it in some way, shape or form is going to pass through Asheville.”

Maintaining both a healthy state budget and a vigorous economy — top, and bottom, respectively — should be the main priority of policymakers according to the report, which also warns that curtaining economic freedom ultimately hinders long-term prospects for meaningful recovery.

“The things that we did all four years I’ve been there, we’ve lowered corporate income tax, we’ve lowered personal income tax,” Corbin said. “That’s kept more money in people’s pockets, which has them spending more.”

“We’re looking at the figures right now, but a lot of counties are running a surplus,” Corbin said. “I can tell you here in my home county of Macon, they had a $1.7 million surplus because sales tax is way up right now.”

The surplus can also be attributed at least in part to the influx of tourists and new residents who might not have discovered Western North Carolina were it not for the Coronavirus Pandemic.

“People would rather be in Waynesville or Sylva or Franklin than Atlanta or New York,” Corbin said. “They come here because of our style of living, fear of the rioting, COVID, the university, and because of this our sales taxes go way up.”

Were Fedison advising the General Assembly based upon the conclusion of her and Lopez’s report, the message is simple — stay the course.

“They’ve done a good job so far of getting the state into a good fiscal position. In regard to their top down response, keep on doing that — North Carolina’s made a lot of positive changes in the past decade in their tax policy,” she said. “Now is not a time to rock that boat. Ordinary people do not need to face higher taxes at any point, but especially at this point in time. For fiscal policy, keep on doing what they’re doing with regards to a bottom up recovery, and look for instances where economic freedom can be improved.”