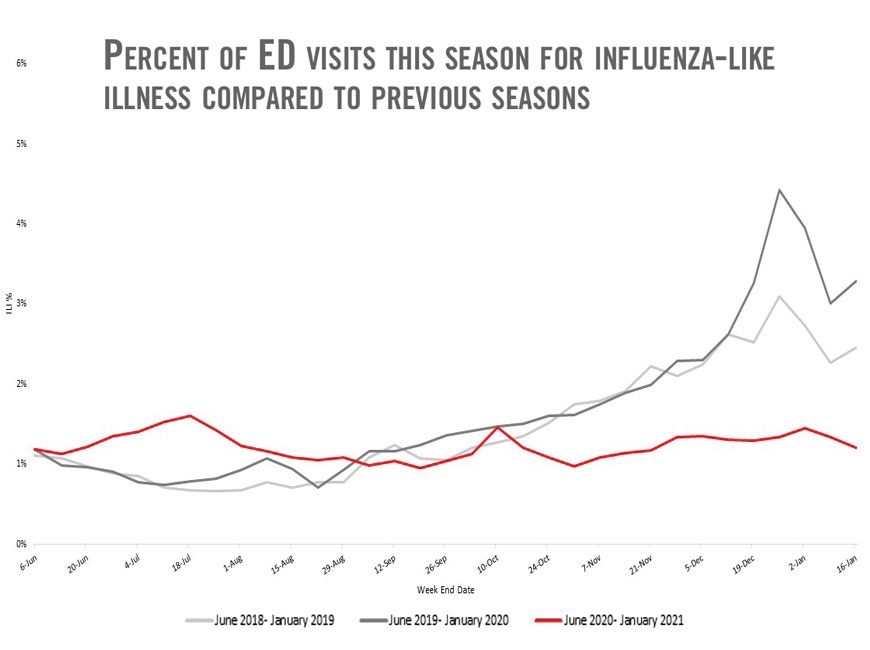 It’s always hard to predict what kind of flu season the U.S. should expect and how severe cases could be. Add in the fact the U.S. is still experiencing record numbers of new COVID-19 cases on a daily basis and it makes predicting the future more difficult.

So far, flu cases have been down significantly compared to the 2019-20 season, but health officials also typically expect the peak in early February. According to the North Carolina Department of Health and Human Services, there have been three flu-related deaths since Sept. 27, 2020. As of the week that ended Dec. 19, only 1 out of about 5,000 specimens submitted to the state lab tested positive for flu. And for the week ending Jan. 2, there were 3 positive out of about 3,000 specimens submitted.

“There was an expectation that this flu season would be milder than others, based on the experience in the southern hemisphere last year, where there was a very mild flu season,” said Haywood County Medical Director Mark Jaben. “Why? Who knows. Could be this year’s flu strain is less virulent, more people got vaccinated early, we’ve been lucky, people are following protective measures, Sars CoV2 is so widespread the flu virus has not been able to find people to infect, all of the above, or something totally different.”

Flu season can last anywhere from November to March/April. Jaben says there are years where it gets off to a roaring start in November, and there have been years when it never really got going until the spring. The average peak is late January and early February.

Amber Frost with the Swain County Health Department said the steps people are taking to prevent the transmission of COVID-19 also helps protect people from transmitting the flu. While the health department has seen flu cases this year, the typical peak usually hits in February.

“Individuals who are practicing the 3 W’s are less likely to transmit and contract COVID-19, influenza, and other flu-like illnesses,” she said. “Flu vaccinations for this season are still available. Just remember that for those who are getting COVID vaccinations, there needs to be two weeks between the COVID vaccine and any other immunizations (before and after).”

Influenza and COVID-19 exhibit some of the same symptoms — fever, aches, fatigue, cough — which can make it difficult for people to know which virus they may have. A physician can test patients for both viruses and quickly know which one a patient has contracted. Many providers, including Haywood Regional Medical Center, have testing capabilities that check for COVID and the flu at the same time. It’s also possible to have the flu and COVID at the same time, though it’s been uncommon here in Western North Carolina.

“Absolutely. It is possible to have the flu and other respiratory illnesses at the same time,” said HRMC spokesperson Lindsey Solomon, which is why it’s still important to be vaccinated for both viruses.  “While the flu vaccine won’t protect you from COVID-19, flu vaccination is the single-best way to protect yourself from the virus. It is still possible to contract the flu after getting vaccinated, but it is much less likely; and should you get sick, studies show that flu vaccinations can make your illness less severe,” Solomon said.

“People can certainly have both, at the same time or one after the other. We have had a case in Haywood County of someone testing positive for flu, Covid and strep throat at the same time. Having said that, this has not been common this year because there has not been much flu around so far,” Jaben added.

Jaben said the best time to get the flu shot is in the fall before flu season really kicks off because immunity is present about two weeks after the vaccination and will last through April. However, if someone hasn’t yet gotten the flu vaccine, he said it’s still not too late to have an impact.

“It is essential that people get the flu vaccine, which not only decreases a person’s risk of getting the flu, but if a person gets the flu, the illness will likely be much less severe,” Jaben said. “Widespread flu vaccination also protects those most vulnerable by limiting spread within the community. Right now when our hospitals are stretched very thin, widespread vaccination will decrease the number of people who get ill enough to be in the hospital, a benefit whether you have flu, COVID, or something totally unrelated.”

Solomon said a good rule of thumb is to get vaccinated no later than the end of October, but agreed it’s not too late to get it now. HRMC flu clinics are only open to staff. Flu vaccines are offered to all new employees and patients once and are available from initial availability of vaccines in the fall through March.

“Right now efforts are being put towards Covid vaccinations. Actually, there has been little request at the Health Department for flu vaccinations,” Jaben said.

Frost said people can still get the flu vaccine at the Swain Health Department for free now through June while supplies last.

As of Jan. 16, the CDC reported that seasonal influenza activity in the U.S. remains lower than usual for this time of year.