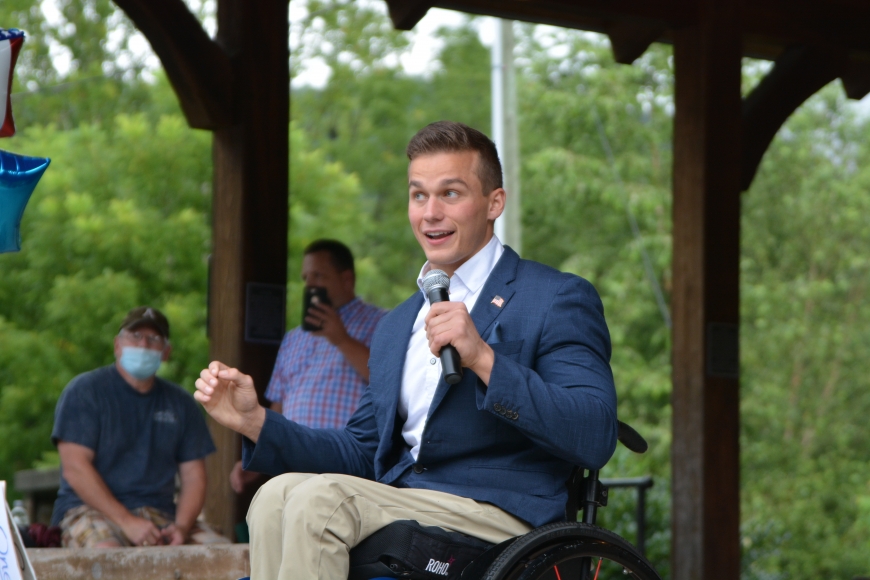 Rep. Madison Cawthorn speaks at a rally in Sylva this past summer. Cory Vaillancourt photo

Newly-elected Western North Carolina Republican Congressman Madison Cawthorn, R-Hendersonville, hadn’t yet been on the job for three whole days before witnessing perhaps the most consequential day in American politics since the start of the Civil War.

Sworn in on Jan. 3 as North Carolina’s 11th District representative, Cawthorn was on the House floor when insurrectionists breached several security perimeters and disrupted President of the Senate Mike Pence’s efforts to count ballots that would ultimately certify President-elect Joe Biden as the 46th President of the United States.

Cawthorn found time today to speak to The Smoky Mountain News less than 24 hours after it all happened, describing the chaos and confusion that ensued, including the assistance he received in evacuating — Cawthorn mobilizes using a wheelchair.

He also weighed in on President Trump’s and his own possible role in inciting the violence, and whether or not Trump should be allowed to finish the rest of his term.

The Smoky Mountain News: Tell me about the moment when you first became aware that there was a mob outside trying to get into the Capitol building.

Rep. Madison Cawthorn: Yeah, so I'm sitting inside, on the House floor making a Constitutional argument based on the way our Constitution is written. I knew it wasn't going to overturn the election, but I just wanted to make sure that we were not setting a precedent that just because of a national emergency, you can’t circumvent the Constitution and go around state legislatures to pass laws for elections in different states.

So I'm sitting there making that argument on the House floor and then all of a sudden, just being situationally aware, you kind of realize these Capitol police officers are getting very tense. You hear a lot of indistinct radio chatter, which you normally never hear on the house floor.

All of a sudden they start locking the doors, and so you're kinda saying, “Wow, I wonder what's going on?”

There were a few members within the chamber who started getting very restless. They were getting really concerned and highly stressed for sure. I heard over a radio that protesters had made it to the House steps and in my mind I was like, “Oh, there's probably two guys that saw an opening and ran a dead sprint across the courtyard. Those guys are about to get tackled.” That’s what was going on in my mind.

Then you hear that tear gas has been deployed inside the Capitol rotunda and then they say, “They’ve breached our last line of security. They've made it to Statuary Hall,” which is really the last of the access chambers before you make it to the House floor.

Then they tell us to start deploying our escape hoods, which are basically just kind of low-tech gas masks.

Then the Capitol police made an announcement to remind everyone that the chamber seats are all bulletproof and so if we need to, we should get down behind those. And, you know, it was like, wow, this is real.

I don't want to over-exaggerate here, but it was the closest I've ever been to 9/11, thinking that a major monument to American success and prosperity is being attacked by people who want to subvert it.

In my mind I was not thinking, wow, Republicans are out there storming, Constitutionalists are out there, storming. I said, “There is this disgusting and pathetic group of people who are storming the Capitol.”

SMN: What happened when you were notified that it was time to leave?

MC: We were starting to be evacuated and the evacuation route is down stairs. Working with Capitol police, we figured out a way how we could make that more inclusive of the members who have disability problems. I’ve got to hand it to fellow North Carolina congressmen Ted Budd and Richard Hudson. They really helped me. They got me down some steps. They moved a lot of the furniture that was used to barricade different doors so I could get through.

But because I had to take another route, we didn't have our Capitol police escort so there were multiple times we needed to change the route we were taking just to be safe. Fortunately, I was armed, so we would have been able to protect ourselves.

We stayed hunkered down at another member's office but then I opened the blinds — and not to make a pop culture reference — I felt like I was watching Lord of the Rings when the orcs were taking over the last stronghold of man. Just thousands of people literally climbing on the Capitol, literally climbing on our monuments to democracy. It was sad, that that's what’ve resorted to in this country. I instantly wanted to call it out and just say, “Hey, I'm literally fighting this battle on the House floor. What are you doing? You're destroying our movement.” Just as much as I called out Black Lives Matter protesters in the summer, I’m very happy to call out these protesters. It was wrong and it shouldn't happen.

MC: I think you’d have to be pretty ignorant to say that they didn't play a role in it.

Obviously, we were using every legal means necessary available to us. I contested [electors from] five different states, and it wasn't because of fraud, because I can't personally prove fraud and I have really not seen an overwhelming amount of evidence for it, but what I can prove is that the Constitution was definitely subverted and circumvented.

We were fighting that legal battle and then I think a lot of the rhetoric that's been used for the past couple of months has led to people being ready to get up and go and try and take things into their own hands.

I think that's really the fault of the establishment. A lot of people did not feel like their voices were being heard.

That's actually why I still chose to contest the election after the events of the day. The reason I did that is because the Constitution does not change because of any current events. There were Constitutional violations. I wanted to make sure that we've not set a precedent that would say, “If there's a pandemic, if there's a global crisis or a national crisis, you can go around the Constitution.” That could lead to a lot of very dangerous precedents and a slippery slope in the future.

SMN: At the same time, President Trump has been making these comments, you've largely echoed him. You spoke at a rally before the violence broke out and said “The Democrats and all the fraud they've done this election … they're trying to silence your voice.” Do you feel like your comments could have played a role in the violence that ultimately took place?

MC: I don't necessarily think it did because I think what I was doing was saying, “Although most Republicans are not going to fight for you, you do have someone who's defending you and I am fighting for you within the Capitol right now.” The main purpose of that was to say that the reason you elect representatives like me is so that you don't have to go take things into your own hands.

SMN: Now there are calls emerging for the removal of President Trump, either by impeachment or by utilizing the 25th Amendment. Do you support the idea of removing the president before his term ends?

MC: I had a bunch of constituent visits this morning so I really haven't put a lot of time into thinking about that, but I think it's definitely time for the president to concede.

I think there's some things we could do in the future to ensure more election integrity and security, but as of now we've exhausted every legal means that we have within the Constitution to fight against Biden becoming the president, but he is now the president-elect, he will be sworn in as the 46th president of the United States and I think it's time that we start moving forward with the transition process. I think it's time for the president to concede, but I don't know if we need to forcibly remove him. He's only got a week-and-a-half left.

SMN: Any final thoughts on what happened yesterday?

I think I'm stealing a quote from [Texas Republican Congressman] Dan Crenshaw, but the American flag being waved as you are storming the Capitol – the American flag is supposed to be waved as we charge against our enemies, as we take ground in defense of freedom, not when we try to subvert democracy in an attack on our elected representatives.

It was really a sad, sad state of affairs we went through yesterday but I think that in due time, I believe that we might be able to become stronger for it. I think it's almost like a 9/11 moment where the country really came together after that, so I’m hoping that's what can happen now.