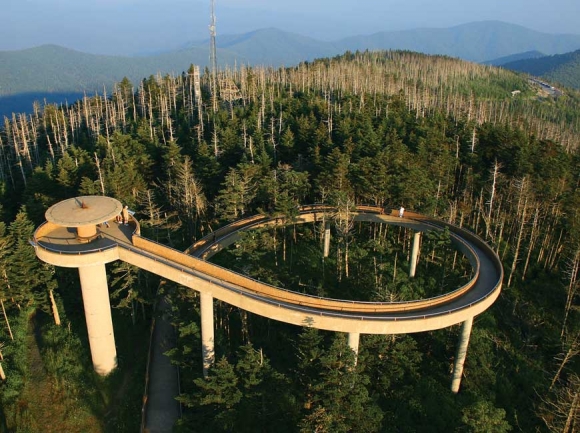 The road leading to Clingmans Dome in the Great Smoky Mountains National Park has deferred maintenance needs of $3.4 million.

The environmental community has been celebrating since the U.S. House of Representatives passed the Great American Outdoors Act July 22, sending the landmark legislation to the desk of President Donald Trump, who is expected to sign it into law.

If enacted, the legislation will provide dedicated funding to reduce the National Park Service’s deferred maintenance backlog and fully fund the Land and Water Conservation Fund. For years, the Park Service has experienced chronic underfunding including a reduction in staffing and a growing backlog of nearly $12 billion in needed repairs — all while dealing with record visitation. The legislation will dedicate up to $9.5 billion over five years to address the highest-priority repair needs.

“You cannot overstate the importance of this bill and what it will mean for national parks, public lands and communities across the country,” said Theresa Pierno, President and CEO for the National Parks Conservation Association. “This is the largest investment our country has made in our national parks and public lands in more than 50 years, and it comes not a moment too soon.”

In Fiscal Year 2018, the Blue Ridge Parkway had a deferred maintenance backlog of more than $500 million but receives only $15 to $20 million each year for maintenance work. In the Great Smoky Mountains National Park, more than 75 percent of the park’s deferred maintenance needs were associated with its 384 miles of roads, totaling $186 million. The Foothills Parkway needs $44 million and Newfound Gap Road requires $22.8 million.

The bill will also provide $900 million per year to the Land and Water Conservation Fund, which for 50 years has protected land for parks, wildlife refuges and recreation nationwide. The program is funded using a portion of revenues from offshore oil and gas royalty payments but has seen trouble in recent years, with the program lapsing for six months between September 2018 and March 2019 after Congress failed to pass reauthorizing legislation in time. The program was permanently reauthorized last year, but advocates have been working to see the program receiving full funding as well, as revenues had been diverted since the fund’s 1964 creation.

“This is a historic victory over 50 years in the making for communities across the country that benefit from the economic, cultural and recreational value of America’s public lands and close-to-home recreation,” said Tom Cors, spokesperson for the Land and Water Conservation Fund Coalition and director of government relations for lands at The Nature Conservancy. “Despite years of uneven funding, LWCF has conserved iconic landscapes in every state; protected our national parks, forests, wildlife refuges, wilderness, monuments and battlefields; and supported community investments in parks and outdoor recreation opportunities. Now, LWCF will be a promise fully kept, as a permanent commitment to conservation, recreation and community needs that for too long have fallen through the cracks. And, it will do all this while driving job creation and economic recovery efforts our country needs right now.”