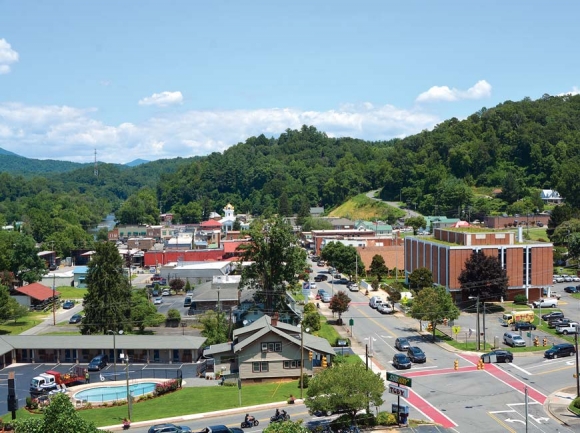 Swain County commissioners are going to be giving more consideration to who they appoint to county boards after hearing a long list of grievances from a member of the Tourism Development Authority.

Ed Ciociola, treasurer for the Swain County Tourism Development Authority, recently told county commissioners that something needs to change in the longstanding ties between the county’s chamber of commerce and the TDA.

Since taking over as the TDA board treasurer last year, he said he and other board members have found a number of “grave discrepancies” while reviewing the budget and expense reports from the chamber of commerce.

After becoming treasurer, Ciociola said he took part in meetings with TDA auditors who made it clear the chamber and TDA accounts were “too intertwined” and said the separate entities should keep their finances separate even though the two have shared office space and staff in the past. The TDA is a quasi-governmental agency that is tasked with spending room tax revenue to promote tourism while the chamber of commerce is a private nonprofit that supports its paying business members.

However, he said some of the board members have not been open to the suggestion and unwelcoming of newer board members trying to understand the processes. He added that often it’s the same people rotating back and forth from the chamber board to the TDA board who are accustomed to the arrangement and don’t appreciate it being questioned.

“It seems like most people don’t know much about the TDA — what we do or how we are funded. There’s no training sessions for new (board) members and there’s a big learning curve. Questions from new members have been met with condescending replies,” Ciociola said. “I would ask, ‘Why is the chamber paying our bills and getting reimbursed? Why can’t we just pay our bills directly? Responses typically fall into a similar theme, ‘that’s the way we have always done it.’”

He said these alleged discrepancies can be found in the monthly billings and disbursement requests the TDA receives from the chamber each month, and the more he looked into the reports, the more problems he found. As a volunteer board member, Ciociola said it became clear it was too much to correct on his own and sought assistance from TDA staff and the county’s finance director.

“There’s so many different ways the TDA is being incorrectly billed through the chamber,” he said. “The chamber bills the TDA for chamber expenses and since it’s lumped into a large request, it’s so hard to spot.”

Ciociola claimed the chamber payroll account, which is entirely funded by the TDA, had a $22,000 surplus when he started, and that the chamber had been billing the TDA for the cost of their storage unit. He also cited examples of “wasteful spending” — the chamber was spending $1.75 each time staff mailed out a visitor guide. After a little research, Ciociola said the TDA was able to buy a bulk mail permit from the post office, moved the mailing in-house and now only pays 71 cents per visitor guide — saving the TDA thousands of dollars.

“The chamber would bill the TDA for expenses that had already been paid. We would have to look at every expense on a reimbursement request and hope we could recognize something we remembered paying previously,” he said. “The TDA would pay for something, through the chamber, like Christmas trees. The chamber would then sell the trees after the season and keep the money. The chamber would run an event, buy items for the event that they would sell for a profit and requisition the TDA for the same items they sold for a profit.”

The list of claims went on — Ciociola said the TDA would pay for a service or product and it would be canceled or returned but the chamber would keep the refund instead of returning it to the TDA. When a conference was canceled, reservation money was refunded to the chamber and not given back to the TDA. He said he found one reimbursement request for $7,600 and it turned out to be the overdue balance on the chamber’s credit card even though the listed expenses were only for $1,500.

“And there are more examples, well documented in the county finance office,” he said. “We shouldn’t have to work this hard continually correcting other people’s mistakes. It distracts from the actual, productive work of the TDA.”

Ciociola said the TDA board asked the chamber to submit a request for services so we could legitimately pay them for services performed on behalf of the TDA, but that the numbers the board got back were “unsustainable” — $45 an hour to answer the telephones, $41,900 for downtown flower pots (even though the contractor’s bid was $33,800), $59,100 to mow the grass on county property, $82,000 in management fees and an additional $21,000 in operational costs.

“I am not making any judgment as to the reason for these grave discrepancies. Whether it was deliberate, negligent or just inefficiency, we are far more concerned with correcting the situation than assigning any blame or logic,” he said.

He said these problems have caused a lot of misinformation in the community concerning the TDA’s affairs, and he personally has been portrayed as a villain trying to damage the chamber.

“Now the entire TDA is being villainized by chamber loyalists as trying to damage the chamber when, in fact, we are trying desperately to make them a self-sufficient, independent organization that is self-funded through a number of increased revenue sources,” he said. “Every year you as a board have to make tough decisions about who sits on the board and now it’s more important than ever and will decide the direction of the TDA’s future.”

Ciociola said many of the board members have big goals for the TDA to start hosting more events, going after more grants and building new tourism-related infrastructure to benefit tourists and residents. He said he also wants to see more areas represented on the TDA board, including the Nantahala Gorge and Deep Creek.

The TDA board is already making major changes. During a May 13 Zoom board meeting, the TDA board voted to make Mary Anne Baker executive director of the TDA. Baker has worked for the TDA as the social media manager since 2017, but Karen Proctor Wilmot has been the TDA director for many years. At the same time, she’s also been director of the chamber of commerce.

During a May 27 TDA meeting, the board approved its budget in a 3-2 vote. The budget did not include money to provide Wilmot’s salary as it has in the past.

Swain County Commissioner Roger Parsons said he attended the last TDA board meeting and agreed board training is definitely a need.

“These boards are a reflection of the board of commissioners,” he said. “We should look at appointments carefully and when we appoint the members they are able to go through a training process.”

Commissioners have three TDA appointments coming up soon and agreed to go through an interview process moving forward.

“I think we can spend (the money) better than just on marketing and tourism,” he said. “We sure don’t need more fighting — it shouldn’t cause more problems.”

During the commissioners’ June 11 meeting, County Manager Kevin King said he was working to develop policies and procedures for county-appointed boards to present during its next meeting June 25. The commissioners will be interviewing the 11 people who’ve applied for the TDA board starting at 1 p.m. June 18 before making the appointments June 25.