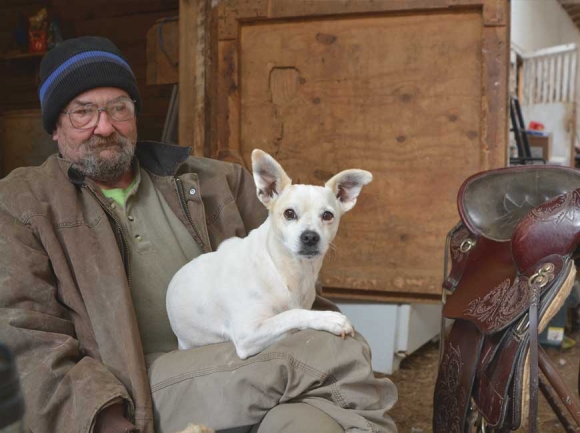 Weeping Cherry Stables operator James Lunsford sits in his barn with one of his dogs, Powder. Cory Vaillancourt photo

Haywood County resident James Lunsford, 65, is currently the subject of an animal cruelty lawsuit filed against him Oct. 11 in and by the county of Haywood.

Lunsford, operator of Weeping Cherry Stables, allegedly failed to provide adequate sustenance to a number of horses and other large and small animals in his care, according to the civil suit.

The civil suit hasn’t yet been heard in court but did ask for relief in the form of seizing Lunsford’s horses, terminating his ownership rights and preventing him from owning horses in the future. The first two of those points are mostly moot, as Lunsford says he got rid of all his horses right after being served with the suit.

The criminal charges are all Class 2 and 3 misdemeanors, the least serious of the four classes of misdemeanors in North Carolina; Lunsford’s Dec. 9 initial appearance in Superior Court was continued to Jan. 13 because his attorney was unavailable.

Given the breadth and depth of the allegations against Lunsford, a former lead agent with Haywood County Animal Control Services, The Smoky Mountain News requested and was granted an interview with Lunsford at the 131-acre Weeping Cherry Stables on Sunday, Dec. 9. Aside from several affectionate dogs and a few hens, no other animals were observed in Lunsford’s barn or pasture.

The Smoky Mountain News: You’ve got a civil suit filed against you, and some criminal charges for mistreating animals. How do you respond to those?

James Lunsford: I don’t know where they get mistreated horses because half of them were rescues, some of them even from this county. I had rescue pigs, rescue horses. I’m the rescue for Haywood County when they have livestock.

SMN: So they bring animals here to you?

SMN: How often does that happen?

JL: They don’t have them very often.

JL: No. Horses, pigs, anything.

SMN: How many horses have you got right now?

JL: None. I sold and gave them away. I even got rid of my cow.

SMN: You say that you don’t know where they’re getting these allegations from, but they sent a vet [Brittany Beil, of Whiskey River Large Animal Mobile Veterinary Services] out here and she made all these reports of all these animals and said that they were maltreated.

JL: She said some of the older ones needed to put some weight on. I said, OK, that’s a 27-year-old horse, and it’s a rescue. It’s been here for two months. It’s going to take time.

SMN: Some of the other horses, though, had been here more than a year.

JL: But there wasn’t nothing wrong with them.

SMN: She said some of them had a Henneke Score of like, 2.

SMN:  So you think that her report isn’t accurate?

SMN: You’re going to file charges against them.

JL: I’m going after them.

SMN: With the civil and maybe the criminal charges, they’re probably going to try to prevent you from owning animals in the future. If you get this all settled and that doesn’t happen, will you get more horses?

JL: No. I told Jeff [Stamey, deputy director of Haywood County Animal Control Services], I mean if I got one for my kids or something like that, but as far as rescues, no. I was the sheriff’s department’s person, when they seized horses or livestock, this was where they would come to.

SMN: So you’re saying these animal welfare groups have basically hounded you out of business?

JL: I had Weeping Cherry Stables, and I boarded horses. They put me out of business.

SMN: These animal welfare groups have tried to tell me that you were let go from animal services in 2010 for hoarding animals.

JL: I was diagnosed with Multiple Sclerosis and my supervisor found me passed out in the parking lot in the snow, and took me across the street and I woke up in the back of an ambulance. I never got to work a day again. I was in a wheelchair for three years, then my animals got me out of the wheelchair. I hadn’t even used a cane up until all this started in the last two years.

SMN: These groups have also told me that since you worked at animal control that you know Doyle Teague and you know Jeff Stamey so they’ve given you special treatment.

JL: I met Jeff Stamey when he first come up here. I replaced Doyle Teague at [Haywood County Animal Services]. That’s how I met Doyle, and now he’s back to the Board of Elections. They [HCAS] actually called and asked me if I was interested [in Teague’s director position, vacated in September].

SMN: Well, there are two sides to every story.

JL: And I reached out to [WLOS-TV reporter] Rex Hodge because he went and talked to Hope for Horses, and I really appreciated him coming out here and giving everyone my address, because I have four people that live on the property with PTSD and two developmentally disabled children here, and now I’m getting death threats.

JL: Both. They’re going to shoot me. I don’t buy that stuff.

SMN: Do you think the county has handled this situation properly?

SMN: But you don’t think they should have filed that lawsuit.

JL: The day the county filed that lawsuit, I talked to the director of animal services [Stamey]. I said, “I’m getting older, it’s just me, my girlfriend just had open heart surgery so she’s not able to help. Don’t bring me no more rescues and I’m going to get rid of these others.” And that was on a Friday. I said they’d be gone by Sunday. Well that night, they brought me those summonses, and I just told him we’ll have it took care of in 48 hours. All I had left was a cow and my mom’s donkey and my daughter’s horse and my son’s horse. Then this Animal Haven of Asheville sends a criminal summons that says I was starving to death a cow — Miss February on the North Carolina Farm Bureau calendar.

SMN: What do you hope comes out of this situation? What’s your ideal outcome?

JL: I’ve already contacted the governor’s office. Hope for Horses is listed as an animal shelter and North Carolina animal shelters are required to pay license under the North Carolina Veterinary Association. They’re not a licensed animal shelter. So how are they getting away with that and using their 501(c) money to go buy horses and everything like that? That’s not a rescue group. That’s a bunch of people going — and I dealt with them when I worked at animal services — you can’t go trespassing on people’s property. You can’t go threatening people.

JL: They just need to quit falsely accusing me. They don’t know me. They never met me. I was the biggest supporter of rescue groups. That’s why I had rescue animals here.