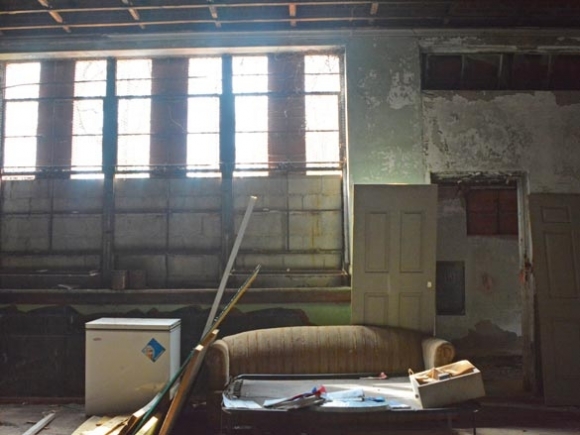 While they revealed those plans at a Feb. 28 press conference, The Smoky Mountain News sat down with Knight and McDowell for a deeper discussion about the past, present and future of their proposed $5 million community center.

Smoky Mountain News: What was your first impression of Reynolds High School?

Billy McDowell: I went to school here, first through the third grade, and it was bigger than life because I always looked up to all the people around here — the football players, we used to bring apples and sell them to them for a nickel. So to be able to go to school here was huge for me.

SMN: And once it’s complete, what do you want someone’s first impression of Reynolds Community Center to be?

Gladys Knight: I would like for it to be a safe haven, so to speak. You can get educated, taken care of. If you’re hungry you’ll get fed. You can learn here.

SMN: There are two storylines here I want to explore — one is of the young student who eventually becomes the owner of an institution of his segregation. What do you think that says about how people can overcome challenges?

BM: That’s a hard question. First of all, my wife mentioned in her talk that it starts with the parents. My grandparents raised me, and they always told me that I wouldn’t be here. For some reason, they know the children that are going to leave. And so, in my mind I loved this place but I knew that to get what I needed, I had to go and find it, and then come back here.

SMN: The other storyline is about a dilapidated segregation-era school reborn as a place meant to draw people together.

BM: I never thought that the school was a divisive thing. I’ve always thought that was a societal thing we had no control over. So I think when in 1966 they consolidated everything, the hardest thing was for the older people because those were the ones, like my sister in the first graduating class of Pisgah, she wanted to graduate here but couldn’t. I got to start out in the third grade, so integration was no big deal to me.

GK: This is an opportunity to re-meld all of those different cultures. I went to a segregated school as well, English Avenue School in Atlanta, but we want all cultures to come here. All races of people. And it will be on a level that they will respectfully want to come.

BM: To add to that, consolidation was not voluntary. This will be.

SMN:  We’ve come a long way since segregation, but it’s clear we still have a ways to go. How do you think the center will lead the people of this community and bring them together?

SMN: Your plans for the center are ambitious, but the building needs major work. I heard it through the grapevine that there may be some upcoming performances in support of the center.

BM: We’re going to look at dates for the Civic Center in Asheville, and I want to do one out here at the football field as well. Wouldn’t that be cool? I’d like to do one this summer if we can.

SMN: Your press release also says you may involve some of your show business family in efforts connected to the center. Who are some people you are both close to in that regard?

GK: Everybody. For real. I have been so blessed. I’ve been in this industry for 68 years, so I’ve had the greatest — from Ella Fitzgerald to Nat “King” Cole — they were my mentors. Bonnie Raitt is a good friend of mine.