Restoring hope for a community 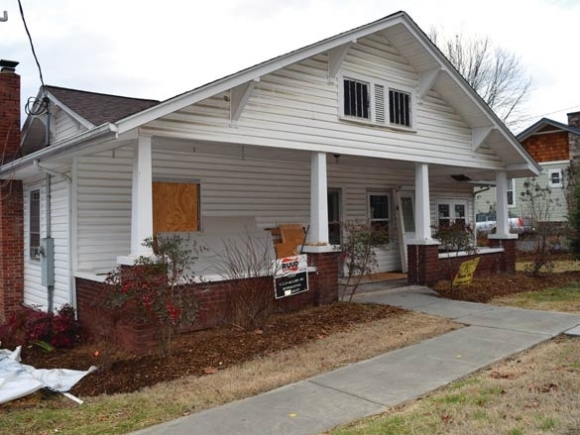 Until last year, the old house languishing on Academy Street on Bryson City United Methodist Church’s property was seen as a nuisance.

“The church was thinking about just giving it to fire department for burning practice,” said Catherine Gantt, president of The Restoration House committee.

But Gantt and several other fellow church members were able to see potential in the dilapidated structure and decided to turn it into a community asset instead.

What began as a liability for the church will soon be turned into a place of hope for Swain County residents. The church received a grant from The Duke Endowment in February 2016 to restore the old house and to cover some first-year operating expenses.

Renovations of The Restoration House have been ongoing for the past year with plans to have the facility open some time this month. The house will provide emergency shelter for the homeless, a free medical clinic, kitchen, washer and dryer and will be staffed with volunteers who can provide a list of resources for those in need.

“We want to take the holistic approach by helping people’s mind, body and spirit,” said Gantt. “We want it to be a place where people are welcome and where they feel comfortable.”

The house will have a main lobby with a volunteer receptionist and bookshelves full of resources for people. Another room will contain a couple of trundle beds and recliner chairs for emergency situations when people need an overnight place to stay. It’s not a huge space, but Gantt said it would be able to fit at least five people per night.

A kitchen will provide a place to make food. The house will also have a laundry room and two large bathrooms — one of which is ADA (Americans with Disabilities Act) compliant.

In the backyard are several raised beds that will be the beginning of a community garden. Volunteers will plant fruits and vegetables that can be utilized by anyone in need. Swain County students will also help with the garden while learning about organic farming and sustainability.

“We hope to create some kind of bartering system for the garden because we’ve found most people want to give back in some way instead of just taking,” Gantt said.

The Swain County Caring Corner, the free medical clinic that has been operating out of the church for the last year, will be relocating inside of The Restoration House. The clinic will have two examination rooms and a storage area for supplies. In dire situations, Gantt said the examination rooms could be made into a makeshift beds to shelter more folks in the winter months.

Since getting the free clinic up and running last January, the clinic has been meeting a growing need in Swain County. Dr. Frank VanMiddlesworth — who recently resigned from Swain Community Hospital amid changes to the emergency department he adamantly opposed — is the one who got the clinic up and running. He said the clinic has already had more than 240 visits from 109 different patients since opening. He has seen patients who haven’t been to a doctor in 10 to 15 years because they either don’t have insurance or can’t afford their deductibles and co-pays.

“Several patients have been able to catch problems in time but we had two people die in their 40s and 50s because they had developed cancers too far gone to help,” VanMiddlesworth said. “But overall it’s been the most gratifying thing I’ve ever done medically.”

In addition to receiving medical treatment, the clinicians offer prayer to patients, and VanMiddlesworth said most people have been open to that service as well.

Gantt said prayer would also be offered along with other ministry services at The Restoration House — though it’s not a prerequisite to receive help.

“We obviously want to offer prayer because we think it helps, but it’s not something you have to do,” she said.

Gantt said The Restoration House would not have been possible without the help of community organizations and businesses who have made donations to the cause. Everything from the flooring, sheetrock and furniture has been donated.

“We’ve gotten more than we could ask for — it feels like everything is really coming together and it’s exciting,” Gantt said.

For more information or to make a donation, visit www.brysoncityumc.org/restorationhouse/.