After sixteen months of meetings, a change of planning director and a nearly complete turnover of membership on the Jackson County Planning Board, an updated industrial development ordinance is now in place for the county. 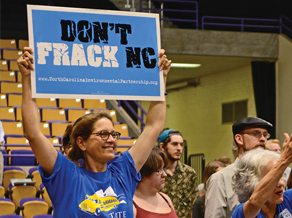 When the state opened the doors for hydraulic fracturing — called “fracking” — in 2014, a flood of public opinion from the mountains told Raleigh that drilling would not be welcome in the western part of the state. 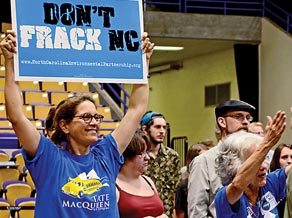 A section of legislation giving the Mining and Energy Commission the authority to decide which local ordinances are OK and which are not when it comes to fracking could be struck down, if a state court sides with a lawsuit recently filed by Clean Water for North Carolina. 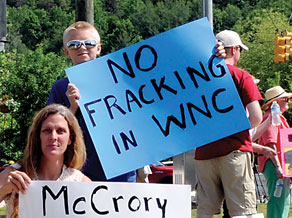 Discussion about a new industrial development ordinance is just getting going in the Jackson County Planning Board, but the board didn’t waste any time in taking a unanimous vote asserting that fracking — a controversial form of fossil fuel extraction recently legalized in North Carolina — falls under county regulations for mining.

Jackson County Commissioners have voiced their opposition to fracking in the mountains loud and clear, and now they’ve signed an agreement making Jackson the first county in North Carolina to lean on the Natural Resources Defense Counsel for help writing rules to mitigate the industry’s impact in their jurisdiction.

The way is now open for oil and gas companies to start drilling in North Carolina, but no wells are going to pop up any time soon. Besides the time lag automatically built into the permitting process, low natural gas prices will likely discourage development and a pending lawsuit challenging the legitimacy of the very commission that wrote the rules could invalidate them. They’ve plowed through the feedback, and now the N.C. Mining and Energy Commission has in hand a revised version of rules to govern oil and gas development in North Carolina, all ready for the new legislative session.

Applause broke out as Jackson County Commissioners concluded a unanimous vote last week passing a resolution opposing hydraulic fracturing — known as fracking — in their first regular meeting since a new board was sworn in.

Don’t call it a fracking resolution

Following multiple anti-fracking resolutions passed by local governments around the region, Jackson County commissioners have now taken an action of their own. While their resolution never specifically mentions “fracking” or “hydraulic fracturing,” the board — or at least three of its members — seemed satisfied that it afforded them protection against the natural gas exploration method green-lighted for North Carolina by state legislators this year.