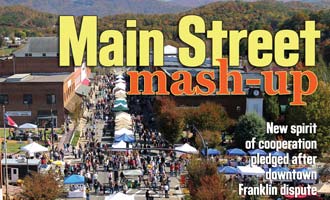 Both sides in a downtown Franklin dispute have pledged to work together after publicly locking horns in recent weeks.

“It seems there were a lot of issues because people were bumping in the dark. Both sides really need to reach out to each other on this,” said Franklin Town Manager Sam Greenwood.

A group of downtown merchants showed up at a town board meeting in November to vent their grievances after town leaders put the brakes on unsanctioned activities during a series of downtown Street Fests staged by merchants.

While some merchants complain of the perceived lack of support for their Street Fests, the organizers didn’t go out of their way to brief the town’s official Main Street board of directors on their intentions.

“If they had come to us and said this is what we want to do, we would have thought about it,” said Linda Schlott, director of the town’s official Main Street Program.

Although the merchants never came to a Main Street meeting to present their ideas, Matt Bateman, owner of Stay and Play in the Smokies and one of the disgruntled downtown merchants, said that’s because he and other merchants didn’t know when the meetings were, nor were they ever invited to come.

Schlott said they could have picked up the phone and called to ask, however.

“Communication is a two-way street,” Schlott said. And besides, “We have been meeting on the same day, same place for years.”

Virginia Murphy, co-owner Silver Threads & Golden Needles, took the Main Street board up on the offer and attended their most recent meeting.

“It was very informative. Had we known about those meetings all along, we would have been better off,” Murphy said.

Schlott has since posted the monthly meeting time and location for the Main Street board on the town’s web site.

But Bateman said the larger issue was whether they would even be welcome.

“When your ideas aren’t heard, the partnership dies. Why would you keep coming to meetings?” Bateman said.

Town leaders, for their part, seemed caught off guard and genuinely unaware that so many merchants were dissatisfied. To clear the air, the town board called a special meeting with the merchants to hash out their concerns and hopefully chart a new, more cooperative course.

“I would like everyone to be on the same page,” said Schlott.

Both sides accepted partial responsibility for what was largely chalked up to a classic case of miscommunication.

“It was just a matter of sorting itself out,” Greenwood said. “Both sides agreed they could do a better job with communication.”

The Main Street Program is a town-funded nonprofit created with one aim in mind: to improve downtown commerce.

Since its inception six years ago, the Main Street Program has made huge strides downtown. While its most visible work is a handful of big signature events each year — major festivals that draw thousands of people downtown in a single day — that’s hardly the sum total of its mission.

When it comes to downtown festivals, however, merchants wanted more activity throughout the year — giving rise to the idea for monthly Street Fests.

“You don’t always have to have huge events. It is OK to have some smaller events,” said Martha Holbrook, owner of Rosebud Cottage. “They run the big festivals. Our idea was to have smaller events in between their bigger events.”

But ultimately,some merchants didn’t feel like their efforts were well received.

To the contrary, Alderwoman Sissy Pattillo said she is delighted by the new energy downtown, thanks in part to a wave of new and younger business owners moving onto Main Street during the past five years.

“They are an asset to our town,” said Pattillo, who serves on the Main Street board of directors.

To Pattillo, it is unclear why the merchants feel left out, considering none of them have ever come to the Main Street board meetings and to propose their ideas.

“As the old saying goes, the street goes both ways,” Pattillo said.

She admitted there was room for improvement, however.

“Sometimes when you are busy doing things, you aren’t doing as much communication as you should be doing,” Pattillo said. “I think the biggest thing we have to do now, since we have had this problem, we have to make sure everybody knows what is going on.”

Going forward, the town promised to bring downtown merchants into the fold.

“We want better communication between the Main Street board and the merchants, like emails about meetings, agendas and minutes, so we are informed about the decisions they are proposing that affect our businesses,” said Holbrook.

Kevin Klatt, owner Ruby City Gems, said he is occasionally caught off guard by downtown events or festivals, having gotten no prior notice.

“We’re not even included. I feel like we’re ignored and overlooked,” Klatt said.

Not all business owners feel that way, however.

“I have no problem with the Main Street Program whatsoever and what it has accomplished. I’m happy with what the program has done,” said Suzanne Harouff, owner of Books Unlimited. “It’s pretty bad we all can’t play in the same sandbox. It’s all this bickering.”

By the same token, Harouff supports the effort to bring more activity downtown and questions whether new ideas are being embraced as they should. The big, signature festivals put on by the official Main Street Program simply aren’t enough, she said.

“The merchants want to do more, and they’re running into a brick wall,” Harouff said.

Two groups better than one?

Downtown merchants are contemplating whether to restart the now-defunct Streets of Franklin association. Long before the town’s official Main Street program came into existence in 2007, merchants loosely organized under the Streets of Franklin, promoting downtown shopping and staged festivals to draw traffic.

Merchants have wondered, however, whether they need to revive Streets of Franklin to give themselves a voice and more formal structure.

For now, downtown merchants are loosely organized under a movement known as “Venture Local.” Venture Local is more of a think tank, an idea generator to rally community support for local businesses and entrepreneurs. It lacks the formal organization or non-profit status of the well-established and town-endorsed Main Street Program, however.

“Main Street is the town’s officially designated program,” Greenwood said. “That’s where part of the contention comes from — that Venture Local/Streets of Franklin are trying to find some means of expressing they are real, too. Along the way, you have people who may or may not be talking to each other.”

That’s what both sides say they are now committed to fixing.

Greenwood called the Main Street board and director the “entry point” for any group seeking town support or permission for a downtown event.

“The aldermen said, ‘try to make it work through Main Street and if you can’t make it work, then come tell us about it,’” Greenwood said.

In a sense, merchants went over the head of the Main Street board when they brought their complaints directly to the town board. Town leaders say they not only stand behind the officially sanctioned Main Street program — but also behind Schlott.

Alderman Bob Scott also endorsed the job Schlott is doing but sympathized with merchants’ concerns on some fronts.

Scott questioned why the town was empowering the Main Street Program — which is technically a nonprofit entity — with a policy-making role.

“I don’t know why there is a feeling that if someone wants to do something downtown, it must be approved by the Main Street program. Coordinated yes, but approved?” Scott said.

For now, it remains to be seen whether Streets of Franklin will be officially jumpstarted as an organization — and whether there is room for two downtown promotional entities to function in tandem instead of in competition.

The way forward, it seems, is for both sides to turn over a new leaf, forget past slights, and start with a fresh slate. Perhaps the public airing was what it took to move the ball further down the field.

“We stirred the pot a lot here locally and we’ve been in the spotlight for a few weeks,” said Cory McCall, the owner of Outdoor 76.

Now it is time to move on — together.

“There’s a lot of rhetoric flying around. My perspective is that needs to dial down and more communication is needed,” said Amy Murphy, co-owner of Silver Threads & Golden Needles on Main Street.

Indeed, that seems to be happening already. Merchants got an email from Schlott a couple of weeks ago asking them about their business’ plans for the holiday season.

“That’s the kind of thing we never had before,” Murphy said. “We’re all interested in what’s best for Franklin. I’m sorry it took so much frustration to get here.”

“It appears the Main Street program is trying to reach out to people,” Virginia Murphy said, adding, “I’m kind of getting tired of the whole thing.”