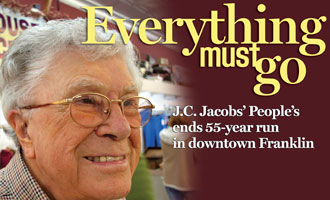 Last Saturday afternoon, with the clearance sale in full swing, patrons poured in the door. They zigzagged about checking prices, trying on shoes and unfolding button-down shirts that store clerks later re-folded.

The chatter and foot traffic made it easy to imagine the store in its heyday, when People’s Department Store was the one-stop shop for everything a person living in a little town, or the countryside nearby, needed.

But the busyness at the store during the clearance sale that Saturday begged the question: where did all the customers go during the last decade or so?

“To Walmart,” Jacobs offered. “Tractor Supply, Peebles, K-mart, Burke’s, Lowe’s and Big Lots. All those big stores moved here, and they’re the ones who do the business today.”

He accuses those big-box stores, which not only dwarf Jacob’s store in size but all of downtown Franklin for that matter, of causing the shuttering of more than 500,000 mom-and-pop shops in small town America. All because they carry cheaper merchandise, Jacobs said.

His brand of business, the People’s brand, was no longer what customers were looking for, or could afford. He recalled a day when a friend who came into his store with a $4 T-shirt from a no-name clothing line he had bought at Walmart. Jacobs pinched the fabric of his own ironed, oxford shirt and moved it between his fingers.

“This is a Pendleton — a hundred bucks,” he said, in reference to one of the name brands he carries at his store. “This was always the place to go for the brands you know.”

In the store, Pendleton shirts sit next to the likes of $140 organic cotton and bamboo sheet sets; $295 suits and $250 Red Wing work boots.

The downhill slide for the store started about six years ago, Jacobs said. And hasn’t stopped since.

The store will be closed by January at the latest or when all the merchandise has been sold — whichever comes first. Another store, a high-end outfitter, will be moving in to fill the space.

But, Jacobs said the closure is also due to changes within his own family. At 93 years old, he has officially been retired since 70. (Before then, he was in the store every day.)

Since then, his two daughters have managed the store for him. Now, one is following her husband to Asheville and the other will work as a full-time minister, leaving the family store short of the necessary family to run it.

But, Jacobs does have regrets.

There was a long streak in his business history when his franchise seemed unstoppable. His flagship store in Franklin had once expanded and bought out its neighbors. There were years when it did $2 million in sales and Jacobs owned several other small shops on Main Street, including a bridal shop and a gift store.

In the 1980s and into the 1990s, Jacobs had opened People’s Department Stores in Highlands, Sylva and Clayton, Ga. He had plans to open another one in Murphy but didn’t. Then he began closing his other stores.

He said it became too much for him to manage, and he didn’t hire the right personnel. He had to downsize to keep the work manageable.

“That was a mistake,” he said. “I would have done it differently, but that’s hindsight.”

He wonders if he had hired experienced people to work for him, that perhaps he could be one of those big chains himself rather than being squeezed out of the marketplace.

But for Jacobs, the thoughts seem more like the musings of an old man who has witnessed his business open, burgeon, blossom and close all in his lifetime — more so than actual business regrets. During the clearance sale, he spent more time bragging about his booming closing business than being remorseful.

Jacobs recalled a story about when he first opened the People’s store and gave away free corn brooms to the first 100 women through the door. They were lined up for more than block. He is proud of how many of his employees, once hired, didn’t leave until they hit retirement age, staying for 10, 20, 30 years or longer.

While sitting at People’s Department Store with his wife, customers file in looking for a discount deal and perhaps pay homage to an old Franklin landmark. The couple solicits a never-ending string of “hello’s” and salutations.

People come in and talk about how their mothers used to buy their school clothes at the People’s Department Store. They’re acquaintances Jacobs has accumulated during a lifetime of being a salesman and a family man in Franklin.

The macular degeneration in Jacob’s eyes makes it hard for him to recognize people by their faces. When approached Jacobs listens until he recognizes the person’s voice, then his face lights up with that $1,000 salesman smile.

Jacobs will turn 94 this month, if he makes it, he jokes. He claims to have the longest running store on Main Street in Franklin and be one of the last men alive to have owned one.

“It’s been a long journey,” Jacobs said. “I’m the last of the Main Street merchants.”

As People’s Department Store prepares to close its downtown Franklin store, a local outfitter has already stepped up to fill the void, somewhat softening the blow of losing a longtime retail anchor on Main Street.

Outdoor 76 will move into the building, expanding its line of outdoor gear, clothing and shoes.

Outdoor 76 will begin renovations in January and hopes to be up and running in the new location by March 1. Although the outfitters store just celebrated its two-year anniversary, part-owner Cory Mccall said business has been excellent, and the expansion has been on the horizon for some time.

“We will be able to tap into other areas such as fly-fishing,” Mccall said. “We want to have an area where people come in and feel more welcome — a couch to hang out, a place for hikers to sit down talk.”

The People’s building is roughly four times larger than Outdoor 76’s current store just down Main Street. It’s probably more space than they can use, so Mccall anticipates sub-leasing part of it to a couple of other businesses.

Comparing the two stores — People’s Department Store and Outdoor 76 — reveals a difference in business models between the old and the new.

Conversely, the generalist approach of the People’s Department Store — selling household standards from belts to bed sheets — meant duking it out with the likes of Walmart, K-Mart, and online commerce. Although People’s offered higher-end goods, the prices were higher as well.

The stores that have prospered on Main Street in Franklin, and indeed Main Streets everywhere, have been able to carve out a niche for themselves and offer something not readily available from other outlets, said Linda Schlott, executive director of the nonprofit Main Street Franklin Program.

Stores selling wares like hand-crafted goods and serving local food seem to be the most successful, she said.

Although People’s Department Store has been a staple in Franklin for more than 55 years, Schlott wasn’t worried it would stay vacant for long.

The move by Outdoor 76 will also open up three additional spaces — the one it is leaving and two more it will sub-lease from its new location — for potential businesses.