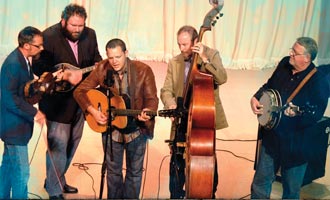 Readying himself for a performance that evening at the Colonial Theater in downtown Canton, Nicholson is part of renowned bluegrass ensemble Balsam Range.

As tall as a grizzly bear, with a persona that is the epitome of southern hospitality, he walks across the stage and extends a handshake the size of baseball glove.

On the heels of their latest release, Papertown, Balsam Range held court at the historic theater last Friday night, Aug. 10. The sold-out album-release party attracted around 250 patrons. The concert was a celebration of not only a new record, but also a homecoming and “thank you” to all in Haywood County — all of those who are a part of “Balsam Nation”— for their continued support of a band that is realizing more and more each day that the sky’s the limit with its potential.

“I grew up in the mountains and music was apart of our heritage. My dad played and about everybody in my family played. We’d play every evening, especially on Friday nights when other musicians would come by and sit on the porch,” said Nicholson. “As long as people have been living here, music has been here. Music and dance is a big part of mountain culture. It’s just a way of life. Sitting down with your family after dinner and playing. It’s been like that around here for hundreds of years.”

Recorded at Crossroads Studios in Arden this spring, the album contains original cuts amid a plethora of material from songwriter Milan Miller (a Waynesville native now residing in Nashville) and The Allman Brothers Band (“One Way Out”), among others.

“It’s got a good blend of stuff and represents us well with a variety of sounds,” said fiddler Buddy Melton. “We mulled over a bunch of songs, picking around 30 or so to choose from, then narrowed it down to 13 for the album. It’s the same process for us with each album. The title cut ‘Papertown’ talks about Canton, where we’re from and the paper mill. It’s a very positive outlook on this great community we live in.”

“To me, the word ‘Papertown’ is a positive thing. Maybe if I lived in eastern Tennessee it might not be seen that way,” guitarist Caleb Smith chuckled. “Both my grandfathers worked in the mill. I had uncles and cousins work there and I have reaped the benefits of that by living here. There would be no town without it.”

Entering their fifth year together, the group came to fruition in a roundabout way of old friends and new, sitting down and pickin’ for the sake of pickin’.

“Originally, we just got together to jam. A couple of the guys had put out solo records and some of us played on those records,” said bassist/dobroist Tim Surrett. “We had so much fun and ended up picking together. By the second time or so we picked, we got asked to play a show and then we just had to look for a name.”

The quintet features Nicholson, Surrett, Smith, Melton and Marc Pruett (banjo). From winning a Grammy Award (Pruett) to being inducted into the Southern Gospel Music Hall of Fame (Surrett), PowerGrass Music Awards “Male Vocalist of the Year” (Smith) to performing at the Grand Ole Opry (Nicholson) or playing alongside the legendary Doc Watson (Melton), they’re an array of talent and acclaim deeply rooted in Western North Carolina.

“We all grew up around here. There’s something magical about [bluegrass] that grabbed me,” Melton said. “It’s hard to describe until you’ve experienced it. We meet new fans all the time that have just discovered this music and it hits them in the heart.”

And as the train keeps rolling down the tracks, the band is swiftly breaking through into the national scene. After being nominated for numerous International Bluegrass Music Awards (IBMA), they finally struck gold with the 2011 award for “Song of the Year” with their hit “Trains I Missed,” which charted No. 1 on Sirius/XM Radio. That album (of the same title) was ranked “Bluegrass Album of the Year” on the 88.7 FM (WNCW) countdown.

“There are a lot of things changing in the band with the business side of things. There are growing pains and our schedule is getting crazy,” Nicholson said. “We all have families, but the families pitch in and help with band. I think overall Balsam Range has been a positive thing for us and we hope it’s a positive thing for the people around here.”

As a sign of appreciation from the people that know them best, the Haywood County Board of Commissioners proclaimed Aug. 10 “Balsam Range Day.” Not to be outdone, Canton Mayor Mike Ray presented the band a “key to the town” at the Colonial Theater.

“We are blessed to have this caliber of a group represent Canton and Haywood County,” Ray said. “They’re excellent musicians who are always giving back to community.”

“Nobody is looking to nod out [of the band]. It’s kind of funny, we never thought this would go that far and now we’re going to have some decisions to make,” Surrett said. “It’s like a dog chasing a car. You caught the car, so now what do you do with it?”

Sitting down for a barbecue dinner (catered by Blue Ridge BBQ of Waynesville), the musicians line the tables, always sharing stories, always taking a moment to say hello to whatever relative, friend or fan stops by to wish them luck or tell them “how much they enjoyed Papertown. A handful of children scatter around the room. Family is the name of the game for Balsam Range and it should be, taking into account the tradition and values of bluegrass music.

“I grew up in Canton. This is where I was raised and this is where my family is and the pull of that is very strong,” Surrett said. “I lived in Tennessee for a number of years, but here is my home and coming back here musically is the best thing I’ve ever been involved in. I came back to this community and I found myself seeing the same people I saw as a kid. The music scene was so vibrant. This has turned into a real big thing for us.”

Wandering backstage before the show, a cacophony of strings drift through the hallways. Each member finds their own corner where they tune-up, take a moment to collect their thoughts and catch their breath in the minutes leading up to the performance.

“I’m always nervous before we play,” Pruett said. “But once they announce the name and say the band, there’s nothing else to worry about other than to do my job and play the music.”

“When I was a kid, I used to come home from school and sit at the kitchen table and listen to the old Waynesville station, WHCC. They had a show called the ‘Cornbread Matinee.’ They played great country music,” Pruett recollects. “My mother would let me listen for about a half-hour while I had snack and then I’d go do my homework. Well, one day I was listening to Lester Flatt and Earl Scruggs with their Foggy Mountain Boys. I asked my mother what that instrument was on the radio and she said a banjo and I said ‘I’d like to have one of those.’ That Christmas, I got one.”

“I think the reality of bluegrass is that it’s real. There are songs about racehorses, rivers, mountains, murder, baptisms, etc., and all of that still resonates today,” Smith said. “When we look for stuff, we look for things that aren’t written for bluegrass. As a whole, bluegrass is a feel type of music. It’s believable. It’s always fun to bring new music to people and step out with brand new things to offer.”

“I’ve heard the music you come back to as an adult is the music you heard as a kid and I think there’s something in that, in bluegrass, that gives me comfort,” Pruett added. “I listened to it when I was a kid, when I was happy, when I was sad, when I was sick. All of those times growing up, Flatt and Scruggs were there for me.”

With the final moments before going on slipping away, Balsam Range stage lines up and shakes out the last nervous thoughts they may have. Laughter and smiles fill the air. Even before they face the audience to share their musical stories, they’re telling tall tales and matter-of-fact statements that ricochet endlessly between the group. It’s a brotherhood, forged by the well-earned sweat and honor of being a bluegrass musician.

“You’ve got to give back to the community. You can’t lose sight of that,” Nicholson said. “When you’re not in a mainstream genre of music, you become very accessible and close to other bluegrass musicians. With more people at a bluegrass show, it’s just a bigger porch.”

Stepping up to the microphone, Surrett saluted the crowd amid raucous cheers and applause. Outside, the tall steam stacks of the paper mill signal that there’s a lot more work left to do and tomorrow is new a day.

“We grew up here and we played ball here,” he said. “We live here and we think it smells just fine here.”