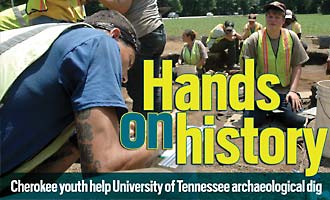 Long caravans of traffic streamed into Cherokee on U.S. 441 recently, but relatively few passengers cast more than a disinterested glance at the small excavation by the Oconaluftee River.

There a dozen local high school students, under the guidance of the University of Tennessee Archaeological Research Lab, were scraping away minute layers of a 2,000-year-old Indian village that once provided food and shelter to the ancestors of the students doing the digging.

“When they lived here, what they built – I want to learn more,” Shayna Ledford, a recent graduate of Cherokee High School, said, sweating freely under the blazing sun the day before the dig was closed for the season.

Ledford was taking part in the excavation to get a sense of history she plans to incorporate into her drawings. An artist, she hoped to learn enough about her Cherokee ancestors to accurately draw scenes of their lives. Because there are no written records of how they lived, art is an important way to inform people of the past, she said.

As it has since 2007, UT sponsored this archeological field school in part to acquaint tribal students with their cultural history. From July 9-20, students and interns carved layer after layer from a small pit in the Smokemont area, in a section of flat bottom land beside the highway that daily takes thousands of tourists deeper into the Great Smoky Mountains National Park.

Most of what the students were finding dates back as far as 1000 BC, Michael Angst, a senior archaeologist with UT Archaeological Research Lab, said as the students dug. These ancient creators of the pottery shards and fire pits would have been Early Woodland people whose lineage would include the Cherokee, he said. Their forebears have been in the area for more than 11,000 years, according to some archeological accounts. UT has excavated several sites in Smokemont. Angst recalls one find – a spear point that was made 7,000 to 8,000 years ago.

Sam Estes, a rising junior at Swain High School, had been on the dig for the entire two weeks. Wearing camo cargo pants and a National Park Services ball cap, scraping dirt with a trowel, he said he’d found bits of chert, a fine-grained rock that was often used as tools. He was told that the rock isn’t native to the area, which indicates that it was brought into the region by Indian traders. That excited him.

“It was incredible to find that,” he said.

Overhead the sun blazed, so bright that it dulled the Day-Glo safety vests that the students wore. Estes’ arms shone with sweat, and his glasses were smudged with dirt. On his hands and knees, he pushed small amounts of dirt into a dustpan, then put the dirt in a bucket inside the 12-by-20-foot excavation area. Nearby, the students had uncovered what appeared to be a formation of rocks that could have been a fire pit.

Angst hadn’t seen a similar concentration of stones in other digs that UT had done in the area. Students were scrapping away dirt in hopes of finding differences in soil color or texture that may indicate why someone grouped the rocks like that. Angst was hoping for a clue in levels undiscovered — charcoal, broken rocks, burned soil that might suggest a pit an earthen oven. Chip stones and pieces of pottery might indicate that the rocks were the bottom of a trash dump, he said.

There were probably dozens of villages like this all along the Oconaluftee River, Beau Carroll, the tribal archeologist for the Eastern Band of Cherokee Indians, said as he graphed portions of the dig. Anywhere that was flat and had good access to hunting and fishing would have probably been home to small family groups growing corn, squash and beans, he said. This camp was likely tiny, one of many along the river that would convene at the larger village near the Ravensford Tract archeological project for council and celebrations, Carroll said. The Ravensford project, the largest individual research project conducted of Cherokee archeology in the state, involved 30-some acres of land and the discovery of more than 100 buildings.

Angst, a compact man with a dense beard, opened a paper lunch bag full of pottery shards that students have unearthed from a fire pit in the Smokemont excavation. Most shards come in bits, broken up by plows and by winter freezing and thawing. The ones he pulled from the bag were large – palm-sized pieces that he fit together to form part of a vessel, maybe a large bowl, he surmised. The shards had a tiny pattern that Angst said were likely the result of the wet clay being slapped against a design carved in a paddle. Craftsman did that to make the clay stronger (it drives air bubbles out) and also to mark it with the pattern.

T.Y. Karah, an archeology intern with the Student Conservation Association, stood nearby, sifting dirt that Estes had scraped up. She was looking for anything a quarter inch or larger that might have been handmade centuries ago. The pieces, all bagged, marked and graphed, will get weighed, measured, dated and catalogued. Then they’ll rest again, maybe for years once more.

“They usually sit in a museum for graduates students to do research,” Carroll said. “People might write theses on them.” Cherokee himself, he’s happy to see the students connect with a part of their past. And he’s glad to see them exposed to archeology.

“Seeing how they look when they find their first shard, when they get excited, it makes me remember why I got excited in the first place and why I’m doing it now,” he said.

In 2005, the national park wanted to replace some water and sewer lines in Smokemont. UT archaeologists surveyed the right-of-way for the mandatory environmental impact study to see if any of it might qualify for inclusion in the National Register of Historic Places. They used a backhoe to strip off the topsoil and the plow zone to see what was underneath. They found a couple of housing sites, one built by Woodland people in the mid-1300s and the other a Cherokee winter house probably built in the mid-1700s.

Because they were able to excavate the interesting material, the water and sewer project was allowed to proceed said UT archaeologist Michael Angst. The area was turning out to be so rich in Cherokee, Mississippian artifacts that UT decided to create the field school, he said.

Twice during a recent visit, tourists disembarked from the long line of traffic heading from the park into Cherokee to park along the field and ask the excavators what they were doing. One woman who stopped told Angst that she has a farm in Missouri that yields arrowheads and bits of patterned pottery when it’s plowed.

Jason Rice also pulled over. From Tuscaloosa, Ala., he planned on majoring in archeology in college before he got married “and did something different,” he said, wearing a University of Alabama knit shirt. “The pure excitement of finding something and finding out how old it is” is what he loves about it and why he stopped his family’s vacation for this tiny cultural pit stop.”

He used to find arrowheads growing up in Alabama. “I think what they’re doing is awesome,” he said before retreating into his air-conditioned van.