Macon County’s eight-month moratorium on the permitting of recreational vehicles in the floodplain will be lifted next month.

Commissioners voted 4-1 on Feb. 11 to adopt amendments to its floodplain ordinance, which now gives developers a set of building guidelines.

Commissioners asked county officials to review the ordinance last year when a developer announced plans to build an RV park along Cartoogechaye Creek. The development plans called for 185 RV sites to be built on 48 acres near the town of Franklin’s drinking water supply.

County Planner Stacy Guffey and members of Macon’s Watershed Council, a nine-member advisory board, developed the amended guidelines which prohibits developers from putting any fill in a floodplain that is not associated with development. Also, all construction must be elevated at least two feet off the ground.

Commissioners Ronnie Beale, Charlie Leatherman, Jim Davis and Brian McClellan voted in favor of the ordinance. Commissioner Bob Simpson was against it. 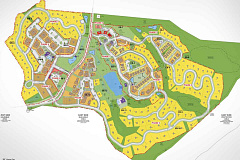 Simpson opposed the ordinance because of the negative effects it will have on a residents’ property values. He suggested that the board establish “some type of mechanism to protect property owners.”

“How do you maintain a stable tax base when you tell a man what he can do with his property?” Simpson asked.

Adopting this ordinance is important because it will allow the county to qualify for federal disaster insurance money, Guffey told the board.

Under the Federal Emergency Management Agency guidelines, an RV is a vehicle 400 square feet or less. Davis said that there are RV’s that are much larger than FEMA’s size requirement. He said if the board failed to include this stipulation in the ordinance he was opposed the adoption.

“I would not be able to support this ordinance if it does not have that,” Davis said. He also said this provision was limiting people from living in a specific area.

The board decided to include this amendment in the ordinance.

Commissioners also approved amendments to the county’s watershed ordinance. The board voted 4-1 to adopt the ordinance with gives a clear definition of an RV and an RV park. This ordinance will take effect next month.