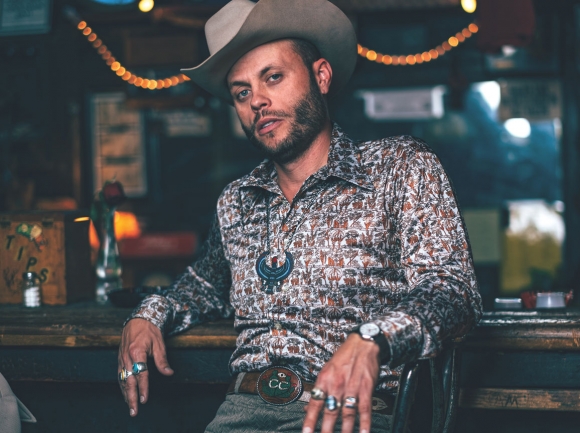 Standing in a hotel room last week, Charley Crockett peered out the window onto the quiet morning streets of Amarillo, Texas.

Crockett had a show in town that evening, something he hadn’t been able to say until recently. For a singer-songwriter who’s spent most of his life rambling around America, having to remain in one place for over a year during the shutdown proved difficult, but also oddly cathartic — ultimately finding inner peace within a restless soul normally dashing off toward the horizon.

In tone and presence, Crockett is this bright, shooting star across the Texas night sky. Hailing from the deep southern tip of the “Lone Star State,” his sound illuminates the communities of honky-tonk, soul, rock and folk — squarely located at the intersection of Hank Williams, Otis Redding, Sam Cooke, and Freddy Fender.

It’s a hearty gumbo of intricate spice and richness, something Crockett acquired during his teenage years as a street performer on Bourbon Street in New Orleans, Louisiana. To this day, Crockett remains a sponge, one eager to soak in any and all melodic vibrations and intrinsic adventures he might cross paths with.

And it was those early years in the French Quarter that parlayed itself into Crockett playing anywhere someone might listen, whether it be a New York City subway platform or Midwestern basement party, Southern Appalachian backyard barbecue or lonely dive bar stage somewhere along the ole dusty trail.

Now 37, all eyes and ears in the audience, whether on purpose or serendipitously, are on Charley Crockett — this embracing figure of familiarity and timelessness amid confusing, uncertain times.

Smoky Mountain News: I would surmise that you’re not someone who likes to sit around in the same place for a period of time.

Charley Crockett: Yeah, man. I mean, I was a hobo. I used to hitchhike for about a decade. I just liked to go. I guess the way I see it is, I know that we’re not here long, you know? And there’s something comforting to me about always keeping it moving.

People like Waylon Jennings, all those [legendary country singers], all just stayed on the highway until the end, until they couldn’t really go anymore. And I don’t feel like I’m getting left behind if I’m moving — I don’t want to be left behind.

I would never take a break on my own. But, being forced to stop like that [because of the pandemic], I was able to get back into traveling just for me — driving my truck through the desert, through the mountains, just for me.

And I’m trying to be more about that now, because when you look at this business and everybody [in the music industry], all the things going on, it’s a racket, man. It’s like pinball games or if you’re playing a slot machine — you might win a few times, but at the end of the day, if you keep playing, you’re eventually going to lose all your money, you know?

Where we’ve been the last year? I thought about it, and well, what I built nobody can take away from me. I want to be able to enjoy things in my life without worrying so much about maybe about getting left behind or being forgotten or something like that.

SMN: I identify with a lot of what you’re saying. That’s one of the biggest reasons I became a journalist, having this gig that is a vehicle to roaming around. I’ve always felt more at home on the road than I ever did anywhere I actually called home.

CC: Yeah, that’s just something inside a person. Some people are the opposite, some people want to be in one place. And I mean, as much as I travel constantly, I [can be a] home body. But, my [true] home is that world of traveling.

SMN: Was your original plan to be a musician or did all your traveling morph into that as your ultimate career path?

CC: I fell into it. I don’t think people become itinerant street performers necessarily, I think it’s circumstances, you know? So, I had a lot of things in my life, maybe some bad things that happened, that pushed me in that direction.

It wasn’t even that I was necessarily trying to be a professional musician. People started giving me money for playing in parks, and then I started standing on street corners because I already was traveling around.

There was just something in me, where in high school they’re trying to get you to go a certain direction. I never was able to focus on the things they were talking about in school. They wanted you to pick a category [for a life and a career]. And I didn’t feel like it. It didn’t feel like there was anything for me there.

Because of that, I started kind of squatting with people and wandering around. I had gotten in some big trouble, the kind of trouble where it closes off typical opportunities, maybe the normal path that people would take in America.

[And with that], you get into this counter-culture world where something like playing on the street seems impossible to people, but, for some folks, it ends up kind of in the opposite way, ends up being the only thing you can do or that you would even consider doing.

In my twenties, I thought I could live like that, eating hand-to-mouth for all my life, you know? And in a way, I was right, ‘cause that’s all I’m doing now. There a bigger audience and I have a bigger team around me, but it is all built out of playing from a guitar case — learning how to stand behind my guitar, learning how to make money out of the case.

Presented by Plugged-In Productions, Americana/roots singer-songwriter sensation Charley Crockett will hit the stage at 7 p.m. Thursday, May 20, at the Hazel Robinson Amphitheatre in the Montford Historic District of Asheville.

For more information and/or to purchase tickets, click on www.hazelrobinsonamphitheatre.com.