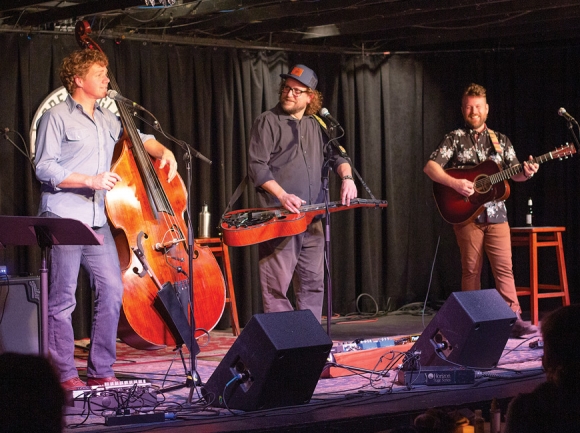 Before the shutdown of the entire music industry in March 2020 due to the pandemic, The Infamous Stringdusters were widely-regarded as one of the hardest touring, most talented and innovative acts in the bluegrass and jam scenes.

And since last year, the ‘Dusters went their separate ways until they could circle back and crank the tunes again. Though most of the band calls Colorado home, bassist Travis Book resides in Brevard — mountain biking in nearby DuPont State Forest and working on his antique Ford pickup when not on the road or in the studio.

But, instead of sitting idly by awaiting the green light to tour again, Book took matters into his own hands, ultimately creating the “Travis Book Happy Hour” variety show — a live stream of music and conversation, which has now molded itself into intimate performances in front of a limited-capacity audience.

Smoky Mountain News: The “Happy Hour” consists of yourself and two other musicians — a power trio. You can create a lot of noise with three people, but also a lot of space for vulnerability and movement.

Travis Book: Absolutely. And I think “the space” is such a great thing to point towards, and something that’s missing. I was on a [studio] session [recently] and someone said, “Is that solo too busy?” [My friend] goes, “Well, bluegrass is a really busy music.”

In general, if you’ve got five people [playing], there’s a lot going on. And there’s not a lot of space. [The Infamous Stringdusters are] 15 years of playing as a full-tilt boogie jam-grass band.

There’s a lot of space in the trio [format], to be able to play in an ensemble, where sometimes there’s just a voice going. The power of three — it’s been really enjoyable.

SMN: The ‘Dusters are a high-energy stage act. For those first episodes of the “Happy Hour” without a live audience, what was it like for just you to perform into the camera, to not have a reaction when a song ends?

TB: Yeah, that’s been an interesting thing to navigate. And it’s been a really good opportunity to experience that in different ways. A few years ago, I sort of realized, even as a member of the Stringdusters, that if any part of my [performance] was dependent on getting something from the audience, [then] that was handing the keys to the car to somebody else.

So, it began a process of me becoming less attached to the audience response, [yet] still wanting to get “deep into that” and “engage with that” — being OK with evolving naturally out of the space and less of, “I need this audience to be right there with me or this isn’t going to happen,” you know?

When COVID started, I was just sitting in front of my phone on Instagram, playing music for people. Very quickly, I got used to the idea [the audience was] out there, that people were listening.

I was just going to do what I do without any response. It’s this real-world way or Eastern perspective to act out. You have a trajectory, but then you let go of the outcome. You work towards a goal, but the goal isn’t the thing — the process is the thing.

It’s the same thing when you’re doing a live stream. You’re having to trust the process, trust the music, and do it entirely without that feedback loop. It’s been a completely different space [for me as a performer].

SMN: The process of stripping it down to such basic levels, working to build it up from there. It’s probably reinvigorated your reasons as to why you love doing what you do — loving the music first and foremost, with everything else around that a bonus.

TB: Totally. It really does. It has stripped away a lot of stuff that gets constructed around your life, around how you do things, and why you do things.

This [shutdown] took everything back to ground zero. And I think for a lot of bands in the music industry, we’re entering into a space where the question is not, “When is it going to be back to normal?” The question is, “What’s coming next?”

These [musical] spaces are always changing. It’s shifted to where there’s nothing but opportunity out there. I don’t want to set up a duality, but you can [either] sit back and wait and see, and a lot of musicians are doing that — waiting for things to stabilize, waiting to be comfortable to get out there and play.

And then there’s a whole host of other musicians that are just continuing to do whatever it is they do in whatever context they can — reimagining opportunities whenever and wherever they can.

It’s happening right now. There’s never been any other time than it is right now. And what happened before [the shutdown]? It’s almost irrelevant because your value and potential before is not the same as it may be now — everything has changed.

The “Travis Book Happy Hour” variety show will take place on select Wednesdays onstage at The Grey Eagle in Asheville.

All shows begin at 7 p.m. For more information and/or to purchase tickets, click on www.thegreyeagle.com.

There will also be performances held at 185 King Street in Brevard, including Sierra Hull & Justin Moses May 4, Benny Galloway w/Tommy Maher May 11, and Mike Ashworth & Mike Guggino (Steep Canyon Rangers) May 18.

All shows begin at 6:30 p.m. For more information and/or to purchase tickets, click on www.185kingst.com.

Tickets for both venues are $20 per person. Limited capacity seating. Shows are all ages. Live streams are free to view. Donations via a virtual tip jar are accepted.