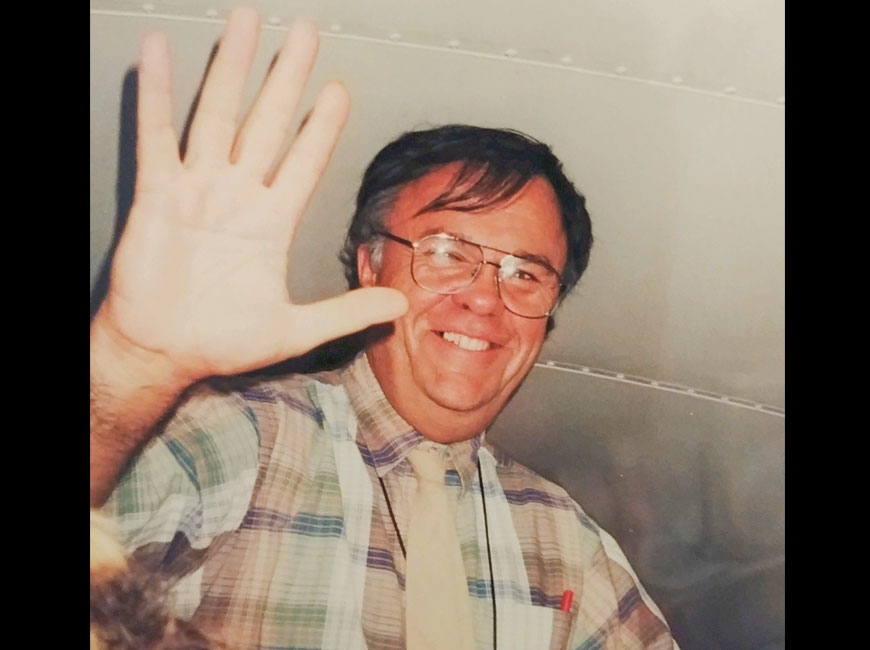 It is with an extremely heavy heart that I share the news of the passing last Friday morning of Brian Power (aka: “Mr. P”) after a long, debilitating illness.

In my life, Mr. P has always been there, this force of nature and humor that never ceased to make me smile and feel loved, and with eternal friendship. He and his wife, Myrna, have been best friends of my parents for decades. My mom even played matchmaker and introduced them to each other. And when I was little kid, Mr. P and Myrna got married on the side lawn of my childhood home, an old 1820 limestone farmhouse on the Canadian Border of Upstate New York.

Both he and my mother taught English in my high school, Northeastern Clinton Central School (Champlain, New York), their classrooms next to each other for most of their storied careers in education. Mr. P was my ninth-grade English teacher, one who sparked a lifelong love of literature and writing within me. I vividly remember when he would read from the classic novels and plays, dramatically jumping into the protagonist character in this riveting back and forth manner with the students reading along in sheer awe of his performance.

He was also my cross-country and track coach from seventh to twelfth grade, sparking my lifelong love of running — all while learning the meaning of goals and hard work, which can lead to successes beyond your wildest dreams, just so long as you never take your eye off the prize.

One of Mr. P heroes was the late American distance runner Steve Prefontaine, whose words echoed continuously throughout my extensive middle/high school running career (and now adulthood): “To give anything less than your best is to sacrifice the gift.” Mr. P would constantly mention that quote, deeply-felt sentiments now etched onto the walls of my body, mind and soul.

In essence, I wouldn’t be who I am today without Mr. P in my life. I spent countless Christmas dinners at his farmhouse, summer barbecues and boat rides at the cabin on Chateaugay Lake (in the heart of the endless natural splendor of the Adirondack Mountains), spring break trips to visit my folks, he and Myrna on Tybee Island, Georgia, and so on.

And all of those races, hundreds and hundreds of cross-country and track races in seemingly every corner of New York State. I think of stepping up to the starting line at the Carrier Dome in Syracuse, on a beach in Long Island, mountaintops in the Adirondacks, frozen cornfields in the Champlain Valley. Getting up at 3 a.m. on a Saturday morning to catch the team bus heading to a weekend invitational gathering in Albany, Saratoga, Malone, Saranac Lake, Burnt Hills, Guilderland, Lake Placid, etc.

At every race, Mr. P was right there, giving me last-minute advice and strategies before the starting gun went off, yelling for me from somewhere along the course to run harder, to chase the unknowns of the horizon in front of me, to sweat out the pain and reach the top of the hill for the eventual finish line. Mr. P was one hell of a coach and mentor, one whose encouragement will forever ring true in any of my career pursuits and life endeavors.

I also think of the thousands of students and athletes he cherished and motivated. Anyone who had him as a teacher or coach knows damn well he was one of those rare human beings you’ll never forget, who always believed in you and your abilities. Mr. P was always in your corner, come hell or high water. He has been as much of a fixture in my existence as anyone. And for that, I’m grateful for his love, support and friendship.

The image of him in this column, I took when I was in high school, as we were on the cross-country bus leaving some faraway invitational. That smile and wave were signature to his demeanor, his sincerity and kindness. His jokes were as dry as sawdust (retold happily a million times), his eyes often misty with pride and passion whenever he’d speak of the value of teamwork, of persistence, and of what it means to find out what you’re truly made of — on and off the track.

Last summer, when I was home in Plattsburgh, New York, I got to visit him one last time. We spent the afternoon together at the cabin on Chateaugay Lake, rehashing old running stories and hard-fought victories (one of his favorites being when I took down the conference’s top mile runner my senior year in the midst of a freezing rainstorm: he crossed the line at 4:47:9, myself by a nose at 4:47:8), retelling those terribly corny old jokes and just simply shooting the shit, as per usual.

I knew he was very sick at that time, his body and mind slowly failing him, a walker holding up a man who once had a Zeus-like stride in the midst of fierce competition. But, he never let on that things were bothering him. He was just happy to sit and talk about the good ole days with me. Before I said goodbye and hugged him farewell, it meant the world to tell him how much he influenced my life.

That said, I’ll be heading back to my native North Country in this week to attend the services and be a pallbearer. It is one of the true honors of my life to be asked to do so by Myrna. Much love and light to his family and all who knew him, for we now will carry on the torch of pride and passion that resided within the legacy of Mr. P.

I miss my friend, very much.