This must be the place: Look in the mirror, who do you see? Someone familiar, surely not me 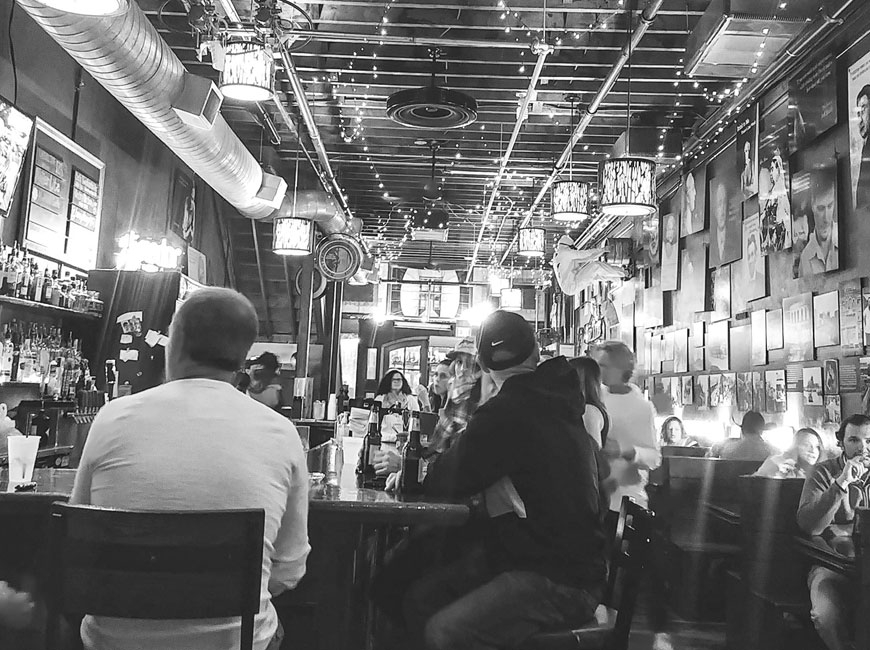 The sound of thunder and a heavy rain awoke me from a deep slumber. Opening my eyes, I relaxed into the king-sized bed and stared up at the 19th century moldings on the ceiling. Looking out the large bedroom window, I could see a transit bus parked below and a Starbucks sign on the building at the corner.

For a moment or two, I didn’t know where I was or if I was still dreaming. But, I quickly collected my thoughts and remembered I was at an AirBnb in downtown Knoxville, Tennessee, and that I was in town for my dear friend’s birthday shenanigans.

I’m hungover from the adventures of Friday night. And yet, there’s still Saturday evening ahead of us. Atop the nightstand is a mess of dollar bills that used to be $20s and receipts from bars scattered around Market Square and Gay Street. My clothes smell like cigarettes from the atmosphere of the Preservation Pub. My head throbbing from the nightcap of Proper Twelve Irish whiskey at Clancy’s Tavern.

Now it’s Saturday afternoon. Lazy and dreary. My good buddy (the birthday boy) is sprawled out on the couch watching golf on a giant TV. I’m on the laptop at this enormous dining room table, once again trying to make sense of this weekend and these situations that I find myself in at seemingly every turn along the road of life.

The AirBnB (aka: “The Shamrock Suite”) is right above Clancy’s and next door to the majestic Tennessee Theatre. Gay Street is bustling with locals, tourists and college kids from the nearby University of Tennessee. In the nine years or so that I’ve called Western North Carolina home, I’ve also been roaming the main drags and side streets of this wild-n-out city.

My best friend went to college here at UT. His family and all of his friends live here. When he used to live in Waynesville, we’d head over the mountains to Knoxville on the weekends and rage downtown with his friends, maybe even raid the fridge at his parents’ house. Eventually, he returned to Knoxville, which he now calls home with his wife and daughter.

Back then, we were all in our late 20s and early 30s. All single and running around in search of whatever anyone else our age was seeking: cheap drink specials, mischief and, if we were lucky, perhaps the love of a significant other. Some of us were luckier than others, and others either faded into the background of your existence or are still on the top of your daily text message conversations.

Back then, it was tailgating at UT football games, bouncing between bars along Central Street, maybe even some karaoke if the mood was right. Concerts at the Bijou Theatre, The Mill & Mine and at the Thompson-Boling Arena. Run around the college haunts surrounding campus, Cool Beans or some fraternity party at a once nice-looking house — now just a shell of empty beer cans and seemingly bad decisions made in blurry haste of trying to impress your peers in the midst of the midnight showcase of alcohol tolerance.

Right now, the cheap futons, couches and floors that I used to wake up on have been traded in for an AirBnb that costs more per night than my rent (and bills included) for one month. The cheap drink specials and Taco Bell runs after the bars closed have been swapped out for bottles of fine wine and farm-to-table dinners at places where dress codes are enforced (sorry, no UT jerseys or band T-shirts in here, sir).

Right now, those beloved faces that used to belly up to the pub counter with me, used to scream at the UT football games with me, are still around, still living their respective lives and such. But, it seems all we are these days are a bunch of text messages over state lines — either answered in a timely fashion or forgotten and gathering dust, only to fall down your text conversation scroll into the depths of conversational purgatory.

I’ve returned to Knoxville for the weekend, but it feels like this town is deserted. My phone calls and messages to the Knoxville crew are all for nothing. They have dinner plans with their wives. They’re watching their kids. They’re too tired from work all week to want to come out and play. They’re doing lawn work Saturday afternoon and “might be able to meet up later.”

What happened to all those once-rowdy faces? I can’t be the only one left that still aims to tame the night, whether it be in the realm of live music or running away from that ticking clock towards the unknown horizon.

When did we all become so responsible, and with calendars filled up? When did we stop answering phone calls and returning messages? I refuse to let any and all faces familiar and beloved slip between my fingertips like the sands of time in an hourglass.

I suppose when you spend your life on the road, those left behind keep moving along in their own ways and means. You circle back from time to time to see those faces familiar and beloved, where everything has changed ever so slightly. Several years pass and the entire landscape, physically and emotionally, has shifted to where you’re still “you,” but feel like a stranger in a strange land.

The sound of thunder and a heavy rain awoke me from a deep slumber. For a moment or two, I didn’t know where I was or if I was still dreaming. I’m hungover from the adventures of Friday night. And yet, there’s still Saturday evening ahead of us — running away from that ticking clock towards the unknown horizon.