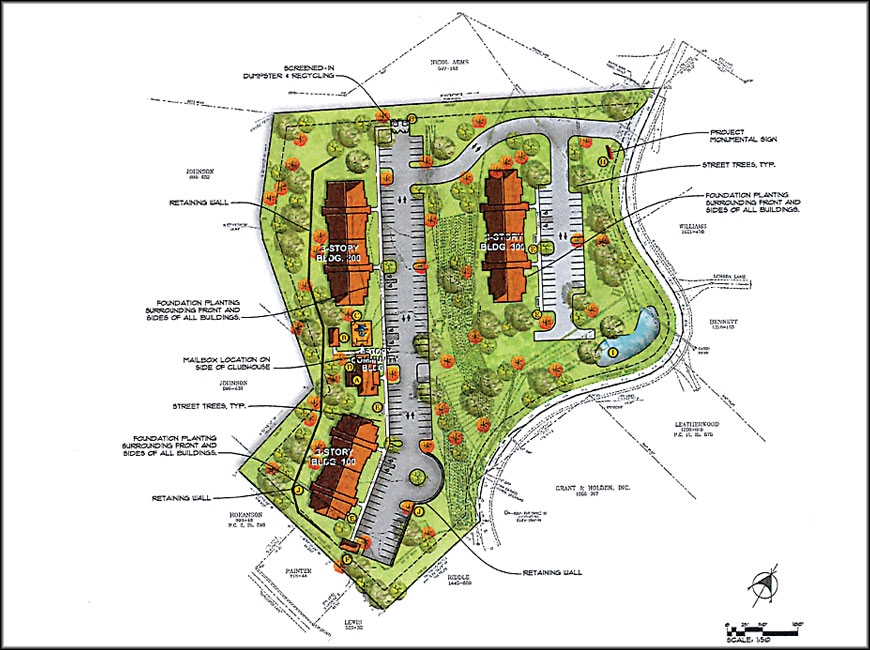 As proposed, The Bluffs would add 150 bedrooms in a three-building, 75-unit apartment complex on Savannah Drive. Martin Riley Associates image

A pair of public hearings slated for April 1 will determine the fate of two proposed apartment developments in Sylva.

The projects would add a combined 274 bedrooms spread over 156 units to a community where a mounting housing shortage has led to higher prices and fewer choices for renters and homeowners alike.

During a March 9 meeting, the Sylva Planning Board considered the proposals — which both require a Conditional Use Permit to move forward — and voted unanimously to recommend them for approval by the Sylva Zoning Board of Adjustment. The board is composed of the town’s mayor and commissioners, along with a representative from the extra-territorial jurisdiction.

Envisioned as a senior living development, Canyon Chase would include 84 units — 44 one-bedroom and 40 two-bedroom — in a single four-story building to be constructed on the north side of the Chipper Curve and Allens Branch Road intersection. The project would also include an indoor/outdoor sitting area, a multi-purpose room, an exercise room, a computer center and storage areas for the tenants.

The property, currently owned by various members of the Cogdill family, consists of two parcels. The larger one is a 4.5-acre parcel that sits in the corner of Chipper Curve and Allens Branch roads and contains a home whose current tax value is $38,450. The smaller parcel is vacant, borders the backside of the larger property and fronts Moody Childress Drive.

The proposed apartment building would be constructed entirely on the larger parcel, located within the town’s Professional Business District, where multi-family dwellings are allowed provided the town grants a CUP. The smaller parcel is part of the R1 district, where apartments are now allowed, and would be maintained as open space or as a private park for apartment residents.

The proposal met with support from Sylva Planning Board members when it was presented during a March 9 meeting.

“In the future we’re envisioning this Skyland corridor as a mixed-use corridor that would include some residential and business and government things,” said Planning Board Member Melissa Madrona, “so I think it would fit in pretty well with that and also help serve our future goal of creating a little bit more density for housing development.”

The project is proposed by Clemmons-based KRP Investments LLC, whose manager is Karen Perry. This would be Perry’s second try at building an apartment complex in Sylva. In 2016, the town approved plans for a 54-unit workforce housing project across U.S. 23 from Harris Regional Hospital, to be financed with tax credits from the N.C. Housing Finance Agency. The project was delayed due to issues with receiving the tax credits in the first round of application and came before the town once more in 2018 as a slightly larger, 60-unit project. Though Perry ultimately secured the tax credits, the project was never built.

“For various reasons beyond developer control, The Village Overlook will not move forward and credits were returned to NCHFA,” Perry said in an email.

Chase Canyon will also rely on tax credits to move forward. If the CUP is approved, Perry will apply for the round of awards to be announced in August of this year and hopes to start building in 2022.

Perry’s plans call for the 126 parking spaces required by county ordinance, but when presenting his staff report Jackson County Senior Planner John Jeleniewski said that the county is working to refine its rules on parking requirements. Because of the nature of the project, fewer residents are likely to have and use cars than would be the case with a typical workforce housing or multifamily housing project.

The planning board approved the plan, but with five recommendations attached. The first four, proposed in Jeleniewski’s staff report, are that all final site construction plans be reviewed for compliance; that a sidewalk 5 feet wide be built along Chipper Curve Road and Skyland Drive and then connected to the sidewalk network proposed for the interior of the project; that downcast lighting be installed for parking areas, walkways and public spaces; and that KRP coordinate with the N.C. Department of Transportation for a driveway access permit and three-party encroachment agreement for the sidewalk.

The fifth recommendation, added by the planning board, asks that the back parcel be preserved as green space.

To be constructed on 6.83 acres of vacant land on Savannah Drive — about 1,120 feet south of that road’s intersection with U.S. 23 — this development would include three three-story buildings containing a total of 72 units for a total of 150 bedrooms.

In addition, the project would feature a community area with a clubhouse/multipurpose room, covered picnic area, playground, covered patio and gazebo. The property is within the Business 2 district of the town’s Extra Territorial Jurisdiction, where multi-family developments are allowed only when a CUP is granted.

Town ordinance requires 108 parking spots for a project of this size, but 133 parking stalls are proposed. Unlike the senior living complex, this development is expected to attract working families who would travel the already busy U.S. 23 during peak hours. However, a signal does already exist at the intersection of U.S. 23 and Savannah Drive.

The applicant on the project is Southern Properties & Development LLC, a Greensboro-based business whose mangers are Thomas W. Honeycutt and Brian D. Smith. The land in question is a single tract currently owned by the Hensley and Bartlett families.

The Sylva Zoning Board of Adjustments is expected to make a final decision on the Conditional Use Permits recommended for The Bluffs and Chase Canyon following a public hearing at 5 p.m. Thursday, April 1, at Bridge Park Pavilion.

To grant the CUP, the board must find that the project will not materially endanger public health or safety, meets all required conditions and specifications, will not substantially injure the value of adjoining and abutting properties and will have a location and character in harmony with the general area.

The town had planned to hold the meeting virtually, but on March 25 the town board will vote on a proposal to hold it in-person at Bridge Park instead. Contact Sylva Town Hall with questions at 828.586.2719 or This email address is being protected from spambots. You need JavaScript enabled to view it..