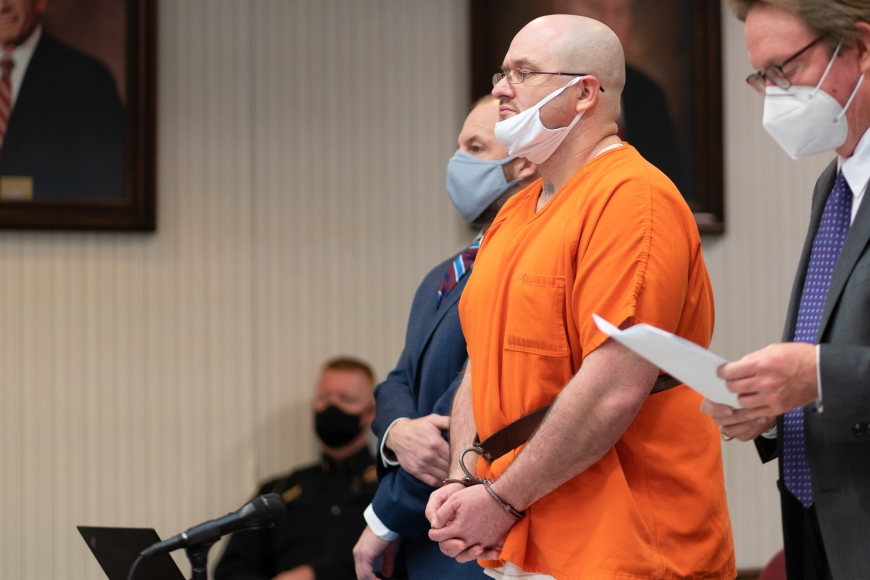 “We know a court sentence can’t replace Tim as a son, father, brother or friend,” Welch said afterward. “But, we do hope today’s action will bring some comfort to his loved ones, who have lost so much.”

The 49-year-old Norris was killed in his Cashiers home on Panorama Trail.

Senior Resident Superior Court Judge Bradley B. Letts sentenced Palmer to serve a minimum of 360 months in prison and a maximum of 444 months in prison, plus pay $5,000 restitution.

Palmer pleaded guilty to second-degree murder, possess firearm by a felon, larceny of a firearm, first-degree burglary, felony larceny and robbery with a dangerous weapon.

There was “something to be said for (Palmer) for not putting your family through a difficult and emotional trial,” he said.

Tim Norris’ father, J.C. Norris, and his mother, Donna Houston, are both in poor health. They requested a plea offer to see the matter through. In victim-impact statements, current and former family members talked about Norris’ faith in God, their certainty he is in a better place and his widespread influence on others. A self-employed painter, Norris was well-known and well-liked in Cashiers, where he was affectionately called “The Gentle Giant.”

”I can’t believe Tim could be mean enough to anyone enough for them to take his life,” J.C. Norris told the court. “I don’t know why Tommy did this. I don’t know what Tim could have done to warrant this.”

Through tears, he said, “This is the worst hurt I’ve ever had in my life.”

J.C. Norris and other family members thanked the District Attorney’s office, Jackson County Sheriff’s Office, State Bureau of Investigation and court officials for their hard work on the case.

“They have shown me a side of law enforcement I didn’t know existed,” J.C. Norris said. “I think Jackson County is very fortunate to have each one of them.”

Norris’ daughter, Brianna, told Palmer she had forgiven him. She presented court officials with a Bible to give to him.

“I will never understand the violence you showed toward my Dad,” the 19-year-old told Palmer. “I pray for your salvation every day.”

At about 6 p.m. on Feb. 2, 2016, Tim Norris’ wife, Tammy Norris, went to work. Her husband had a cold and told her he intended to go to bed early. The following morning, when Tammy Norris returned home from work, she discovered her husband dead, lying in their bed with multiple bullet wounds.

Investigators later found shell casings at Palmer’s home in Wilkes County, Georgia, and at his stepbrother’s home in Lincolnton, Georgia. Those shell casings matched shell casings recovered at the murder scene in Cashiers. In addition to his North Carolina prison sentence, Palmer is serving 10 years active time in Georgia for an armed robbery.