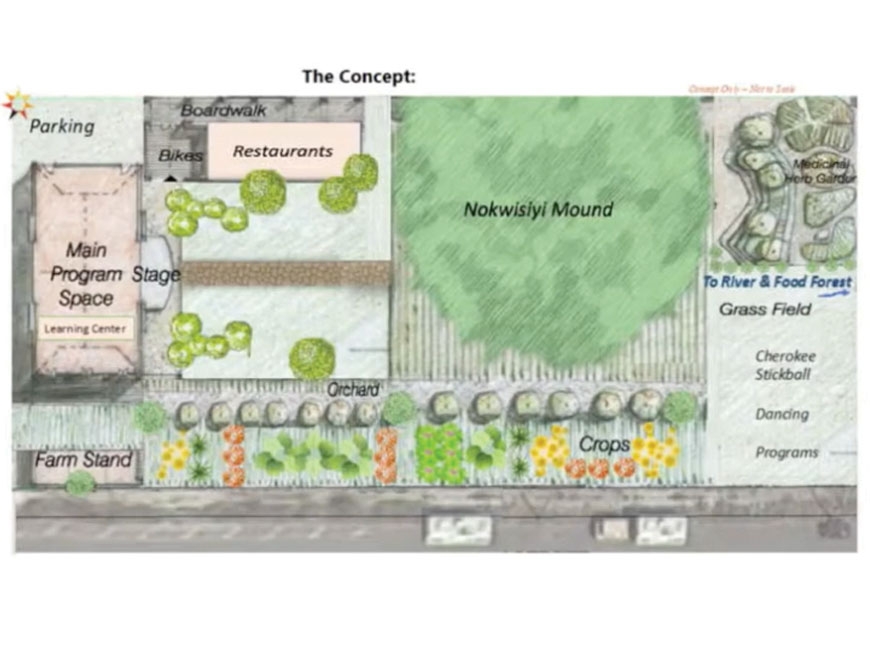 A drawing shows Nikwasi Initiative’s preliminary plans for the mound and surrounding property.

Nikwasi Initiative, the nonprofit that took over ownership of the Nikwasi Mound in Franklin two years ago, recently announced some new projects planned for the adjacent properties.

“The tribe thought about establishing a museum, and we spent a lot of time thinking that over and listening to community feedback and we realized a museum wasn’t going to tell the full story of all the history and cultures in the area,” she said.

The mound was once the epicenter of an agrarian native community. A Cherokee councilhouse once sat on top of the mound with the eternal flame burning, surrounded by family dwellings. They relied on the land and on each other, something Eisenbraun said Nikwasi Initiative stakeholders want to try to attempt to recreate.

“Food and language are important to the tribe and we wanted to incorporate that,” she said. “So, let’s plant the area around it with traditional Cherokee food and create a Cherokee themed modern, casual restaurant.”

The concept would offer many opportunities, Eisenbraun said, including an outdoor experiential design, diverse economic expansion, an indoor learning center where there could be a commercial kitchen to teach cooking and other classroom space for basket weaving, pottery, music and other native skills.

She also sees many opportunities to create jobs, offer internships and recovery opportunities through the “seed to service” model this agrarian complex would create. Such a project would also be another asset for Macon County’s growing tourism trends. As Eisenbraun pointed out, cultural and culinary tourism are two major trends right now, with data showing that 73 percent of millennials seek out cultural attractions when traveling.

“They want the cultural interactions — they want to taste the foods of the area, hear the music of the area and immerse themselves in the culture of a place,” she said.

The feasibility studies Nikwasi Initiative has conducted show that a museum would bring in an estimated 41,000 visitors a year, which would equate to about $511,000 a year in revenue. On the other hand, Eisenbraun said the new plan for diversified attractions could expect more traffic. She said the restaurant could expect 200 people a day, resulting in $1.2 million in revenue, while the learning center and other rental opportunities could bring in $150,000 a year and exhibits could bring in another $100,000 a year. Lastly, the opportunity to develop micro-enterprises on the property — like the farm stand, guided river trips, and crafters — is estimated to create $150,000 a year. The overall impact could be $1.5 million a year.

As for creating jobs, Nikwasi Initiative estimates the project would need five to eight people for the farm, 20 for the restaurant and 10 other indirect positions that would create a total economic impact of over $3 million on an annual basis.

“Those are huge numbers for a nonprofit,” she said.

At this point in the process, everything is still preliminary, though Eisenbraun showed commissioners several concept drawings of what the property could look like when all is said and done. She asked that the county identify someone in leadership to work closely with Nikwasi through the planning process.

“We want your input, and we’ll want you to pony up some money when the time is right,” she told the board.

Nikwasi Initiative Board of Directors is made up of stakeholders representing the town of Franklin, Macon County, Mainspring Conservation Trust and the EBCI. It was this joint venture and vision that convinced the Franklin Town Council in 2019 to hand over the deed to the nonprofit. The town was the deed holder of the mound property since 1946, when residents in the area came together to purchase the property and save it from being developed. The deed was then handed over to the town for safe keeping and maintenance, but Nikwasi Initiative wanted the chance to better preserve the property and the history surrounding it.