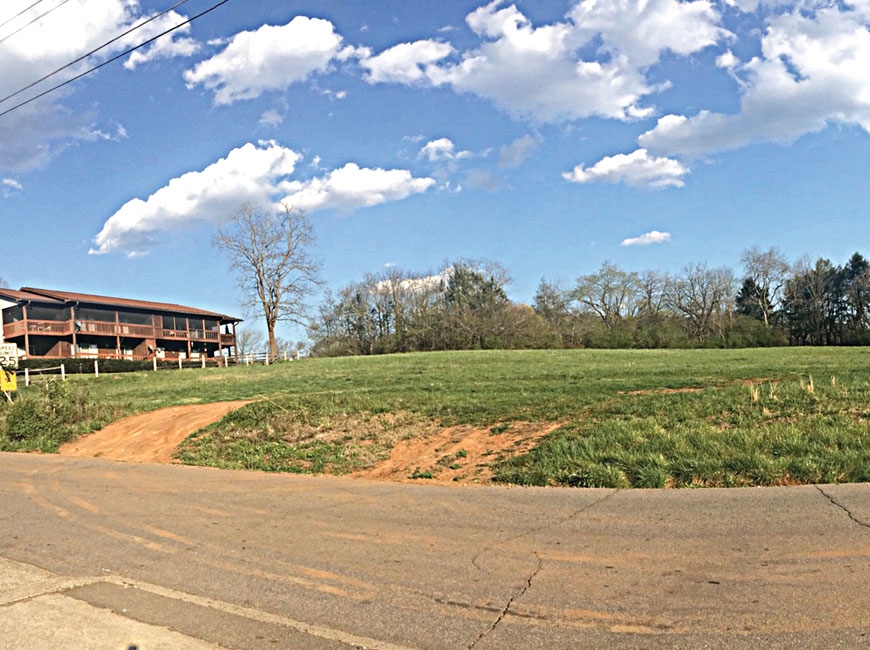 The town of Franklin purchased the Whitmire property in 2005 with plans to build a new municipal complex, but that never happened. File photo

Jacob Reiche and Kyle Ledford — both members of the Franklin Disc Golf Club — appeared before the town board during a Feb. 1 meeting to discuss the possibility. While the board has been hesitant to allow anything permanent to be set up on the property, Reiche said disc golf would be a flexible use because it could be easily removed in the future if the town decided to do something else with the property or sell it.

“It would be a great use for the property — it’s non-invasive, it’s temporary if need be, and if at any time council decides Whitmire is a good use for something else, by all means, we can take up the course and remove it pretty easily,” Reiche said.

Town Manager Summer Woodard said she’d discussed the proposal with the maintenance department and looked over potential costs. The property is already being mowed regularly, so installing a disc golf course wouldn’t require any additional town maintenance. As for costs, purchasing the equipment needed and the installation would cost an estimated $8,000.

Since the town didn’t host its annual Pickin’ on the Square summer concert series in 2020 due to the pandemic, Woodard said the recreation budget still had funding available that could fund the project.

“You could use the $8,000 and still be able to continue with Pickin’ this year,” she said. “If Pickin’ started back Memorial Day weekend, that’s more than enough in the Pickin’ budget.”

Several proposals to use the Whitmire property have come before the board in the last few years, but council hasn’t made any decisions on how to utilize the 13 acres of green space.

The town purchased the property in 2005 for $1.5 million, with tentative plans to build a new town hall complex. However, those plans fell through and the town has been sitting on the property ever since.

The board shot down a proposal to host a large-scale music and beer festival on the property back in 2017 because the town was concerned about safety and liability issues. The town then decided to spend $14,000 on a study to assess the best use for the property. The assessment from WR-Martin Management Consulting found that a passive recreational and/or cultural use would indeed be the best use of the property based on a list of factors the board asked the consultants to consider. Disc golf was listed as a suggested usage, but there hasn’t been much discussion about the property since that presentation was made to the board in early 2018.

The board has also discussed the possibility of selling the land to a developer, something Councilmember Joe Collins has supported, but again, no decisions have been made. The consultants actually advised against selling the property since the town owned the property outright. With little property available for recreation within the town limits, the consultant said the Whitmire property is a rare find that shouldn’t be sold without a lot of consideration. Also, the town wouldn’t have much say over how the property is developed if sold to a private entity.

At the Feb. 1 first meeting, Council members Mike Lewis and Jack Horton said they were in favor of the disc golf course.

“It’s low impact and if we sold it in the future, we could pick it up and relocate the equipment somewhere else,” Lewis said. “It’s a good use and lets taxpayers have use of that property.”

Councilmember David Culpepper agreed the proposal was “a hole in one” and could lead to future recreational use on the property, including picnic tables, a pavilion and perhaps even an outdoor amphitheater down the road.

Councilmember Dinah Mashburn said it sounded like a good plan, but she would still like to table the issue for a month so she can have time to think about it and give anyone else in the community time to offer feedback or make other proposals. Collins agreed he’d like to take a month to consider.

Reiche said it would take a month for the equipment to arrive once it was ordered and another two weeks to install it.

The board will bring the issue up again at its March meeting.