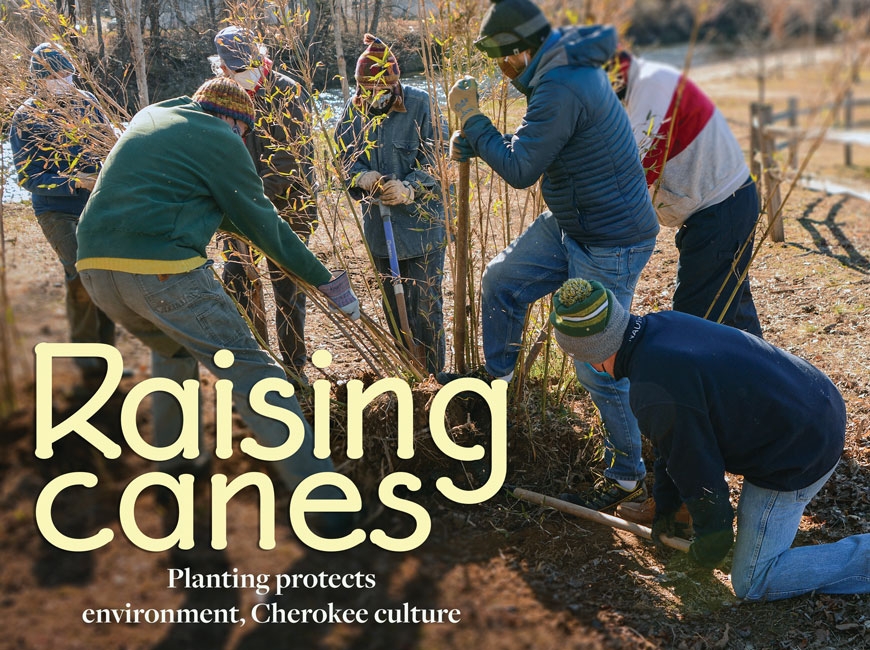 The sky shone an unbroken blue and afternoon sunshine cast sparkles on the lazy Pigeon River as a group of volunteers gathered in the mud-caked parking lot of Rivers Edge Park in Clyde Jan. 29.

“This is a marathon, not a sprint,” said Adam Griffith, director of the Revitalization of Traditional Cherokee Artisan Resources Program at the Cherokee Preservation Foundation, holding a piece of dried river cane in his hand.

Griffith was referring to the slow growing pace of river cane, which the group was there to help plant on the banks of the Pigeon River, but the same could be said for Rivers Edge Park as a whole.

Located along Thickety Road not far from downtown Clyde, the park sits in a historically flood-prone area. During the hurricane-induced flooding of 2004, the river swelled so high that it destroyed the homes that had once stood along the bank. FEMA funding allowed the town to buy out the 4.5-acre property, and in 2013 the park was created to provide floodwater storage to protect against future flooding — recreation is just the park’s secondary purpose.

In 2015 and 2017, Haywood Waterways Association received nearly $75,000 in grants to create a master plan for the park and begin enacting a revegetation plan, which is perhaps the most important component of the master plan. So far, about $20,000 worth of plants have been installed, mainly red maple, sycamore and river birch trees that stand erect at intervals down the gently sloping shore. “They (the Town of Clyde) still want to do more to make this of course a floodplain, which is really the best use for the long term — erosion protection, as well as protection of downstream landowners from flooding,” said Haywood Waterways Association Executive Director Eric Romanizyn.

While the 2016 master plan says this should be accomplished through intensive planting of trees and shrubs, as well as a milkweed garden, river cane offers many of the same flood protection benefits as these other types of species. River cane, whose scientific name is Arundinaria gigantea, is a native species of bamboo that usually reaches 4 to 8 feet in height but can get up to 25 feet high.

Its roots hold soil in place to stop erosion, and its stalks and leaves slow floodwaters. It can help reduce stormwater runoff and filter pollutants. It provides shade that helps keep the river cool, and it adds habitat for aquatic organisms.

The river cane planting aims to bolster another important resource, too — Cherokee culture. For thousands of years, Cherokee artisans have been using the splintered outer bark of the river cane plant to make baskets that are today sold as works of art worth hundreds of dollars apiece. Making the baskets is a long, involved process, and gathering the river cane is a significant part of that process, said Qualla Arts and Crafts Manager Vicki Cruz.

“You can’t just run to a patch and cut about 50 pieces of cane,” she said. “You have to kind of search through the cane patch to find the perfect size and width. It takes a while to go gather it. And then when you get it back home you’re kind of on a timeframe. You want to work it while it’s still green.”

So, the artist will promptly get to work cleaning, cutting, scraping and then dying the bark to the desired color using natural pigments from walnut, butternut and bloodroot.

It had other uses too. River cane was used to make arrows, blow guns, sleeping mats, food preparation mats, walls, spears and more.

“One historian called it the plastic of Southeastern Native Americans,” said Griffith. 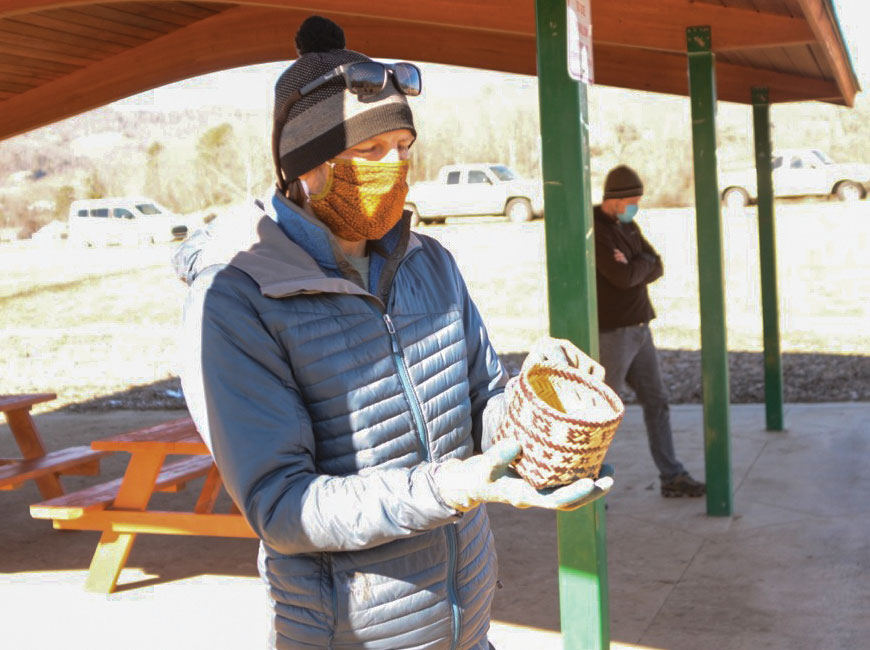 Adam Griffith of Revitalization of Traditional Cherokee Artisan Resources displays a double-weave Choctaw basket that is similar to the type of basket Cherokee crafters make with river cane.

But development and agriculture have made river cane increasingly rare. The only estimate available in scientific literature says that it’s decreased by 98 percent from historic levels, Griffith said.  That’s largely because the plant prefers to grow in wide, natural floodplains, and those are the types of spaces most likely to be settled and cleared by European settlers — often, all the way to the water’s edge.

“They were just left over with little remnant patches on the edges of the stream courses,” said Griffith. “All the river cane patches that I’ve seen are bounded by a body of water on one side and a road, railroad or mowed field on the other side, so just this thin strip is all that’s left.”

New river cane plantings can take years to establish, and because scientists still don’t understand the species’ flowering schedule, seeds are hard to find. Most plantings involve digging up heavy root balls from existing growth and transplanting them in a new location.

That’s what the volunteers on site Jan. 29 were there to help do. A year ago, Warren Wilson College was performing a stream restoration project that required them to get rid of a stand of river cane, and they sent three trailer-loads of the uprooted plants to the Eastern Band of Cherokee Indians. Employees at the tribal greenhouse stuck them in the ground with the goal of creating a nursery site from which the tribe could distribute plantings across the region as the stand expands and grows. 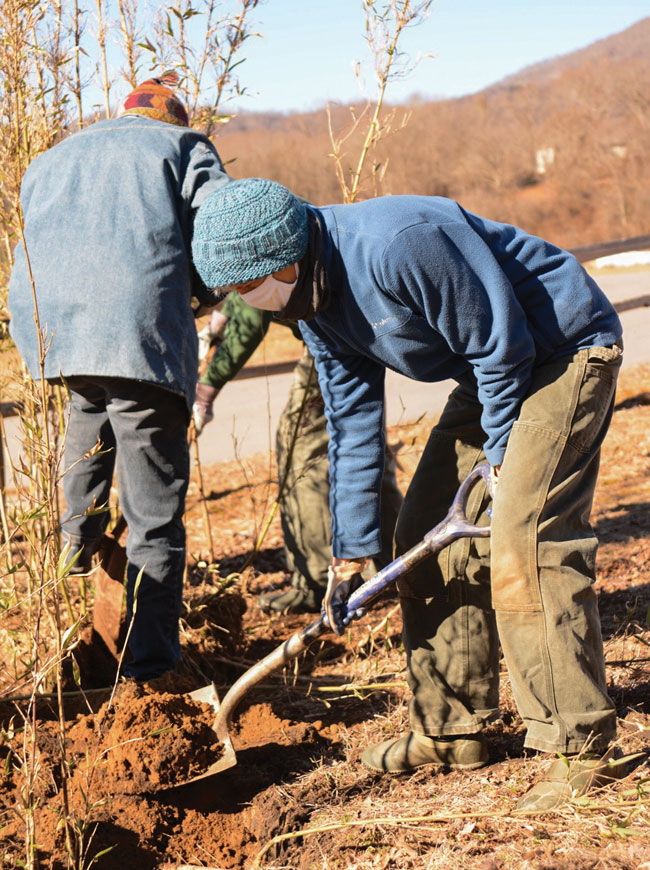 A volunteer shovels soil around a newly planted clump of river cane.

A $3,600 grant from the Cherokee Preservation Foundation allowed Haywood Waterways to receive clumps of the cane for planting at Rivers Edge Park. Town of Clyde employees came out with heavy machinery to dig planting holes, but helping hands were still needed to break up the giant clumps into separate chunks, wrestle them into the holes, and cover them with dirt.

“It’s a resource we need to preserve, not only for the Cherokee because it’s a native plant they use a lot, but it’s also something we should see in our environment,” said Bethel resident Kent Stewart, one of the 14 volunteers who came out to help.

However, Griffith warned, it’s highly likely that for years to come, the cane plantings will continue to look decisively unimpressive. A healthy river cane will have a roughly equal amount of mass belowground as it does aboveground, but even the most careful transplanting requires breaking off some of those lifegiving roots. So, a newly transplanted river cane plant will often spend years working on its underground root system before it sends up any new shoots. Sometimes, the transplanting process is taxing enough that even existing shoots will die off afterwards — but underground the plant is still alive and well.

“Other restorations I’ve done, the plants sat there for years. But now after 11 years there are a few stems of harvestable river cane across the street from the Cherokee High School,” said Griffith. “I coordinated that effort with the help of over 100 volunteers over a decade ago, and just now those plants are coming to a stage where they could be harvested.” 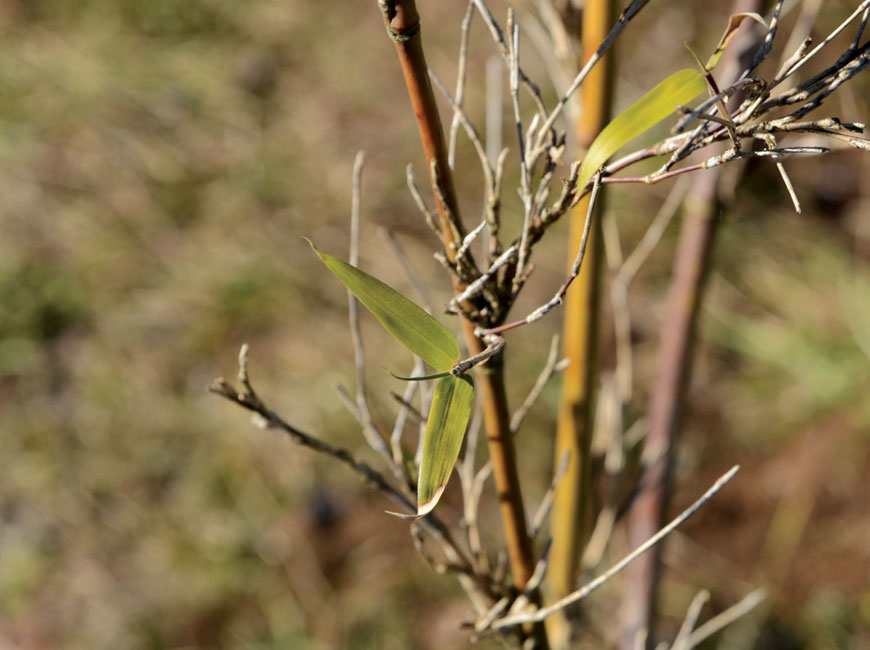 River cane, or Arundinaria gigantea, is a native bamboo that can reach 25 feet in height.

There are also some river cane plantings at Western Carolina University, and students do a variety of studies on them as part of WCU biology classes. Loran Berg, collections manager for the university’s Mountain Heritage Center, was at the Jan. 29 event to get some ideas for a river cane-focused exhibit that the center hopes to create later this year.

The idea sprang from the Smithsonian Institution traveling exhibit “Roots of Wisdom: Native Knowledge and Shared Science” that WCU will host from March 15 through Aug. 22. The exhibit talks about the EBCI and the RTCAR program Griffith oversees, which aims to supply Cherokee artisans with the natural products they need to create traditional crafts.

“We decided to expand on that for an exhibit and do our own little complimentary exhibit to go along with that,” said Berg. “And after the Smithsonian exhibit goes to the next venue, which is up in Tennessee I believe, we’re going to have ours. After a few months I’m going to turn it into a traveling exhibit that can go around to other cities and schools, libraries. There’s a lot of excitement for river cane.”

That excitement is good for crafters, said Cruz, and for Cherokee culture.