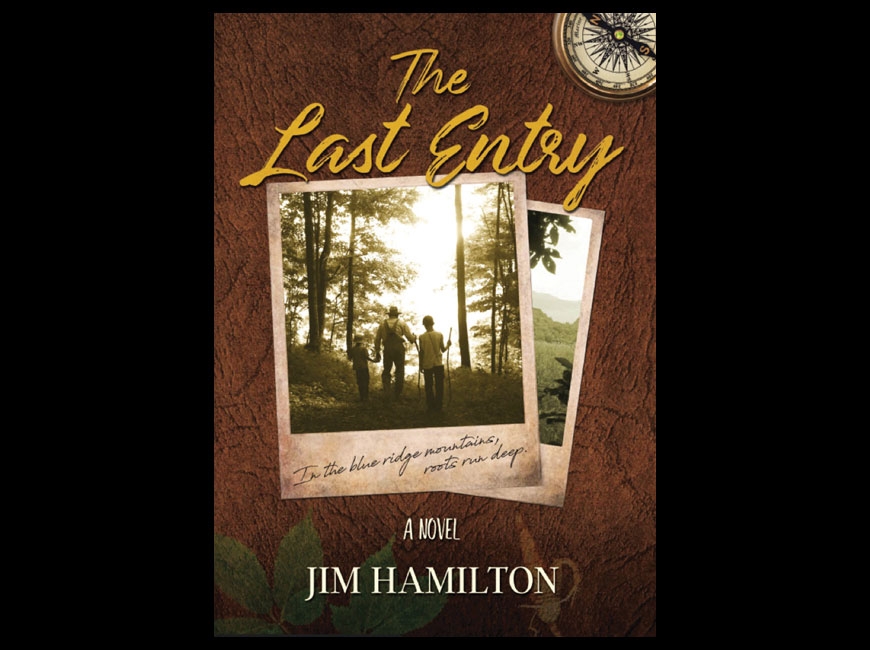 Many of us who read novels find ourselves in awe of authors who create a landscape and a place so well that we can see the fields and forests, hear the birds, and feel the sunshine and rain on our faces.

In his short story “Big Two-Hearted River,” and in so many of his other stories and novels, Ernest Hemingway pays close attention to the weather, the terrain, and the plants and wildlife, in this case focusing on Upper Michigan. As I have mentioned in earlier reviews, Pat Conroy had the talent to make readers taste and smell the Low Country marshes of South Carolina, and James Lee Burke in his Dave Robicheaux novels does the same for Louisiana.

In The Last Entry (Working Title Farm, 2019, 287 pages), novelist Jim Hamilton follows their example by bringing alive the flora, fauna, scenery and weather of the mountains of Western North Carolina.

Hamilton’s story focuses on Tucker Trivette, an Appalachian boy whose alcoholic father either ignores or thrashes him and whose crippled mother constantly berates him for his failures. But his grandfather, who knows the mountains better than anyone else Tucker will meet, loves the boy, imparts wisdom to him about virtues and living, and in particular teaches him woodcraft, especially where to find ginseng, how to harvest it without damaging its value at market, and ways to help the plant thrive for the future.

After his grandfather’s death and his graduation from high school, Tucker follows in the footsteps of the old man and joins the Navy. While on shore leave in Hong Kong, he meets Wei, the daughter of a Chinese entrepreneur specializing in the importation of ginseng. Tucker promises her he can deliver her an enormous supply of this much sought after medicinal herb and returns home after leaving the Navy with expectations of making some good money.

But home is not what it once was. The ginseng he planted before leaving is gone, some of it possibly taken by poachers, some dead or withered from his lack of knowledge about the soil. His parents’ home has burned to the ground, leaving his father dying in a hospital, his mother dead, and his brother missing and presumed dead by others in town. The money he had deposited in the local bank during his time in the Navy is gone, stolen by a relative and his parents.

Meanwhile, he also has a series of run-ins with “Rat,” an old school enemy, and his band of druggie thugs. Another schoolmate, Allie, has also returned to the mountains to live, and she and Tucker continue their verbal sparring, clearly attracted to each other but unable to resist sniping and hard feelings.

To describe the rest of the story — how Tucker earns enough to eke out a rough living, his fights with Rat, the fate of his brother, and the notebook belonging to his grandfather with its secret codes, possibly about where to find ginseng — would ruin the suspense of this fine tale for readers.

As stated earlier, Hamilton has a gift for describing our mountains, especially its plant life. Here, for example, is a scene early in The Last Entry:

“Paw Paw had showed the boys how to find bloodroot and ginseng’s other companion herbs. ‘Bloodroot and ‘seng are like two peas in a pod,’ he’d said. So was poison ivy, it seemed. Everywhere he dug ‘seng, Tucker awoke the next morning with itchy fingers and forearms — the sap from unseen tendrils of the toxic vine blistering his skin. A little jewelweed rubbed between the joints could take the itch away and numbed the welts from the stinging nettle, too. The woods were an endless apothecary, and Paw Paw knew all of its healing secrets.”

Another fascinating feature of the novel was the theft and violence ginseng brings, even today. Readers of The Last Entry may disbelieve poachers and thieves in the 21st century would so value this herb as to risk arrest or even being shot, yet as recently as last year an article in National Geographic, “Demand for ginseng is creating a ‘Wild West’ in Appalachia” reports that growers have armed themselves to protect their crops, and the Forest Service has cracked down on those stealing ginseng from our national forests.

Just as in Hamilton’s novel, the Chinese desire for this herb is driving this phenomenon. In his “Afterword” to the The Last Entry, Henderson points out that ginseng is an endangered species “due to overharvesting in the wild for its export to Asia, where it is valued for traditional, wide-ranging medicinal applications.” He goes on to encourage readers to “plant some seed to keep this special plant and its traditions going forward,” and offers some technical resources to help them do so.

Finally, The Last Entry offers readers a view into the lives of the ordinary people whose ancestors settled these mountains. Like them, many of these descendants have retained a spirit of independence, the value of hard work, and the ability to rise above harsh circumstances. They love and trust kinfolks and friends, and often offer help to them when trouble comes knocking at the door.

In this time of pandemic and divisiveness, Hamilton’s characters and their stories remind us of the many good people living among us in this world.