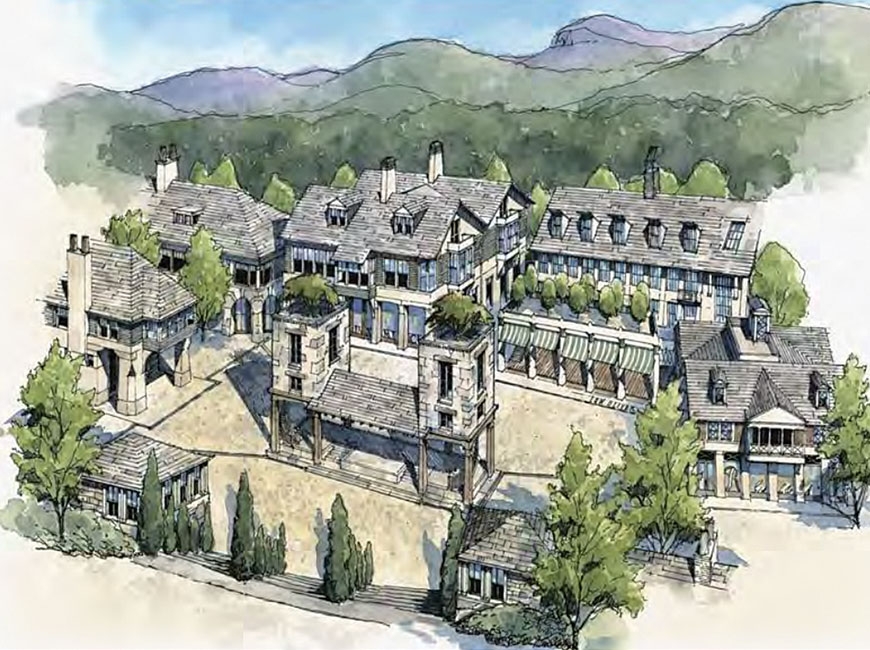 The new version of the development plan would decrease the number of residences from 726 to 581. Donated graphic

After nearly eight hours of discussion and testimony on Monday, Jan. 25, the first day of the quasi-judicial hearing that will determine the fate of a massive development proposed for Cashiers ended with developer Stephen Macauley asking the Cashiers Area Community Planning Council to make its decision based on an entirely different plan than the one he submitted last fall.

“We did what we thought was best, and I directed my team at every stage to follow that philosophical principle and to adhere to the (Cashiers) small area plan at every step. They did that,” he said. “However, over these last two, two-and-a-half months I’ve met with a lot of people who really had concerns about the density of the project and its impact that it would have. And I listened. We all listened.”

As a result, said Macauley, he was willing to reduce a 45-unit condo development in the southeast corner of the 55.5-acre property down to 15 units and to reduce the housing density in the Hilltop Plaza area in the middle of the property by 40 percent. In total, the proposal would reduce the number of housing units from 726 to 581, of which 123 would be workforce housing.

“I hope that is accepted and shows that we’ve tried to be a good neighbor,” said Macauley.

However, the proposal — which was announced verbally and not in writing — prompted vigorous objection from John Noor, the attorney representing several nearby property owners who oppose the project.

“My clients, as you might have imagined, have spent tremendous resources to review the plan as submitted, thousands and thousands of dollars in experts to do that, and now — not the day before, not a week before — during the hearing the plan has changed,” he said. “I’m all for negotiation, but this is an undue prejudice to my clients. I won’t reflect on why it’s being done, but it obviously has substantial economic impacts on my clients’ ability to participate in this process.”

“I’m just a little shocked by the level of objection to an offer to reduce density when we have another meeting a month from now when his (Noor’s) witnesses might not even be reached at that meeting,” replied Craig Justus, the attorney representing Macauley Investments. “You can imagine the millions of dollars that have been spent on our side.”

However, Noor said, the project’s impact won’t necessarily go down in proportion with the reduction in density. Changing the way the project is arranged will mean changing the way landslide risk, stormwater impacts and other factors are calculated — it would “rewrite” every expert opinion given so far.

Noor also criticized Macauley’s decision to sit on the revised plans until the end of a long and grueling day of testimony. Gerald Green, Jackson County's former planning director, had just finished giving nearly two hours of testimony as a witness for the developer, which Noor said would have to be repeated in light of the new plan.

However, Justus replied, Green had — unbeknownst to anyone besides the developer — been giving his testimony based on the revised plans, which he’d received the night before.

In a follow-up interview, Noor criticized the “sheer unfairness of sitting on that information and not sharing it,” saying that the fact that Green had been privy to the revised plans prior to the hearing showed that the developer knew he was going to pursue the amended plan “days if not weeks” before the hearing occurred.

Justus did not reply to email requests for a follow-up interview.

“I don’t think that’s how you treat a community at all, by baiting and switching a project in the middle of an application process,” Noor said.

County Attorney Heather Baker said that midstream amendments like this are “not something we usually see” but that “there is case law to support” allowing such amendments without requiring the developer to withdraw the application and start over with a new one.

Ultimately, the Council decided to accept the amendment — pending a determination from county staff that it meets the technical requirements of the ordinance — and set a series of deadlines leading up to the next hearing day, scheduled for 9 a.m. Monday, Feb. 22.

The developer was required to submit its amended plan — complete with facts and figures that would allow it to serve as a “direct comparison” to the original — by Monday, Feb. 1, and that plan was indeed received just before 5 p.m. that day.

Senior Planner John Jeleniewski will complete a staff report on the new plan by Monday, Feb. 8. All additional affidavits and supporting documents for the hearing must be submitted by Monday, Feb 15.

In addition to hours of testimony on the latest version of the proposed development — the hearing will likely require multiple days to complete — the Feb. 22 meeting will feature a public hearing to clear up what planning staff say is an error in the county’s Unified Development Ordinance.

When the hearing opened Jan. 25, Noor began by presenting a motion to dismiss predicated upon what he said were two “fatal flaws” that meant the planning council did not have jurisdiction to approve the plan.

First off, he said, the UDO states that no development can have more than two points of access along any street or road, but the proposed development has five entrances on Monte Vista Road and five along N.C. 107.

Secondly, the UDO states that no structures within the Cashiers Village Center District may exceed 5,000 square feet — but multiple buildings in the proposed development would cross that threshold.

“These are fatal flaws,” said Noor. “They have to be complied with under the code in order for the project to be approved. We would ask the board to dismiss the application because it lacks jurisdiction to approve a plan that would exceed portions of the UDO.”

Justus, however, called this motion a “hail Mary attempt” and said if it had been a valid objection Noor likely would have made it sometime in the more than two months that had elapsed since he took on the case. Noor did not present the motion until the morning of the hearing.

Regarding the entrance limit, Justus said that the definition of “development” is key. The UDO defines a development as “any one or more of the following” and then lists seven definitions, including “any activity requiring a building permit,” “any man-made change to improved or unimproved real estate,” “any land disturbing activity which … decreases the infiltration of precipitation to the soil,” among others.

“This is 50-plus acres of project that will have multiple buildings and in fact have multiple components, each of which under your ordinance would be considered a development,” Justus said.

Planning Director Michael Poston said that the argument regarding square footage was based on a pair of graphics carried over to the new UDO from the old planning ordinance that had an “incorrect citation.”

The graphics state a maximum structure size of 5,000 square feet, but that limitation is not found anywhere in the actual text of the ordinance. The ordinance does give a 1,500-square-foot limit on footprint size, but developers can exceed that limit if they secure a special use permit, as Macauley is attempting to do.

In the final minutes of the meeting, Poston returned to the podium to ask the council to schedule a public hearing clarifying that point.

“It certainly has been brought up as a point of contention and confusion, and we want to clear that up,” he said. “Certainly our operational understanding of how that standard is written and the contextual component of that plan would not cap the building at any specific size.”

Finalizing a text amendment to the planning ordinance is a lengthy process, requiring public hearings before the local planning council and county commissioners, with affirmative votes from each body and from the county planning board. That process can take anywhere from 45 to 90 days, depending on meeting schedules. The first step of the process, the public hearing, will take place at 9 a.m. Monday, Feb. 22, right before the permit hearing resumes.

For more information about the Macauley Investments project, including development plans and affidavits, visit www.planning.jacksonnc.org/cashiers-area-community-planning-council.

Here’s a look at the differences between planned housing in the original plan and the amended one submitted Feb. 1.