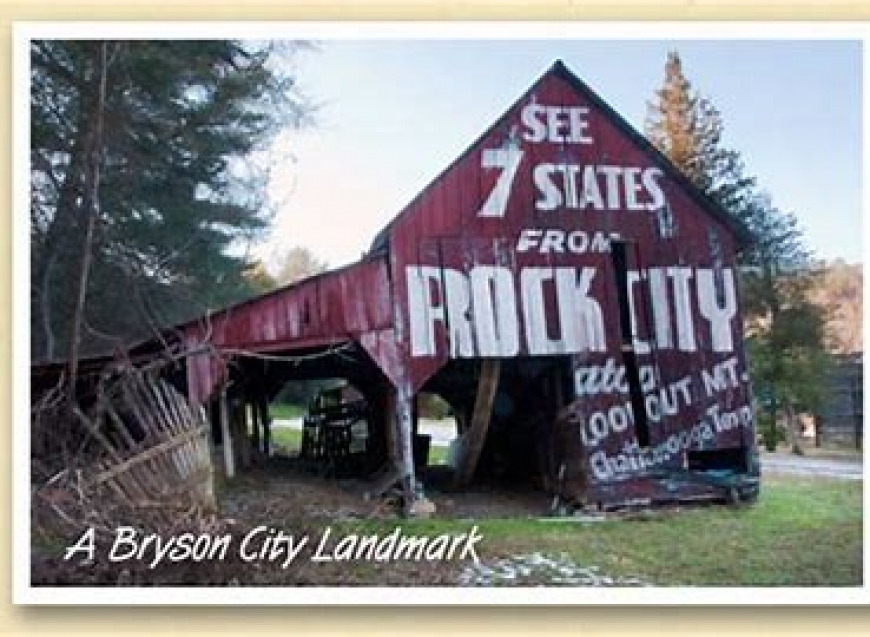 Unbeknownst to many a passerby as they enter the town of Bryson City from the east, there lies a structural icon to an earlier time of automotive travel.

Although a bit dilapidated, the old “Rock City” barn on US 19 East is a proud relic of a bygone era. While the significance is lost on many, the fact that the barn still exists at all is amazing in itself considering that only around 10 percent of the original Rock City barns remain.

It was in 1935 that Garnet Carter, the founder of Rock City Gardens, a tourist attraction atop Lookout Mountain near Chattanooga, Tennessee, came up with the idea to advertise on barns. Three decades later, Clark Byers, somewhat of a barnyard Rembrandt, had painted around 900 barns along 12,000 miles of rural highways in 19 states. Byers cruised the highways and back roads searching for barns and willing barn owners who received a complete and complimentary paint job in exchange for placement of the advertisement. In addition, owners received Rock City trinkets such as thermometers and bathmats to supplement the paint job.

Using a four-inch brush, Byers could usually paint a barn in a few hours and was paid $40 for each job. Every sign was different based on the various sizes and shapes of the barns, but the white lettering was consistent for all of them. Otherwise, the sides of the barns were painted black or sometimes red, as in the case of the Bryson City barn. The most common billboard advertisement said “See Rock City”, however, others were more elaborate, including the sign on the Bryson City barn. Though now somewhat difficult to make out, this sign reads “See 7 States From Rock City atop Lookout MT, Chattanooga Tenn”.

Byers continued his painting until 1968 when he inadvertently made contact with a high-voltage wire and was nearly electrocuted while painting a barn, leaving him partially paralyzed and the hair singed from his head. That, along with the Highway Beautification Act of 1965 (HBA), led to the demise of the barn painting program. In addition to other regulations, the HBA called for the control of outdoor advertising along highways. As a result, many of the rooftop billboards were forced to be removed in order to comply with the Act.   At about that same time the interstate highway system was being completed, luring travelers away from the rural back roads. Many of the barns were eventually torn down due to disrepair or removed for development. Today it is estimated fewer than 100 of the original Rock City barns remain standing.

Although no known records exist as to exactly when Byers painted the Bryson City barn, there are those who remember it being here at least as early as the 1950s. Since that time the ingenious Rock City advertising scheme has become legendary and the barns themselves valued as folk art and the subject of southern lore. One only need to make a quick search of the internet to realize that the Bryson City barn has been fondly photographed and documented by scores of people through the years and the theme of at least one postcard. It served as an attraction and curiosity for visitors to Bryson City well before a tourist train or the business of white water rafting were ever dreamed of.

The states of Tennessee, West Virginia and Ohio have declared the barns historic sites, enabling their owners to apply for potential preservation grants and tax credits for restoration and rehabilitation. Unfortunately, the barns don’t enjoy such status in other states, including North Carolina, rendering the possibility of similar assistance unavailable and leaving it to the responsibility and discretion of the property owner to provide the resources and tender loving care necessary to keep the barns standing. As is the case with any other private property, owners may also choose to demolish the barns if considered beyond repair or beyond the financial, physical and technical resources available to restore the structures.

Though these barns at one time were a common feature of the rural landscape, today it is much more likely to find the “See Rock City” logo on birdhouses than barn sides. To spot one of these sentinels is to catch a glimpse of a time gone by when families in sedans and station wagons took to two-lane highways in search of adventure. We are indeed fortunate to have one of these structural artifacts here within the city limits of Bryson City. With any luck, and a little elbow grease, the barn will remain standing on the side of the road for many generations to come, welcoming residents and visitors alike to our town, recalling an earlier time and reflecting that this community cares about it’s history.

Comments are welcome. If readers have any personal knowledge regarding the Bryson City Rock City barn, contact This email address is being protected from spambots. You need JavaScript enabled to view it..