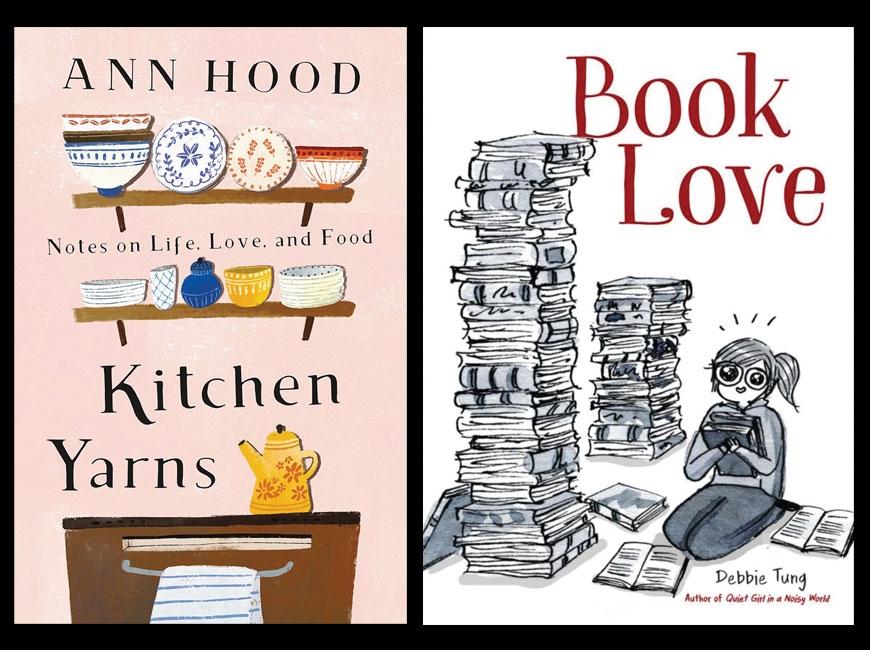 Though I can whip up a tasty breakfast — my wife and I operated a Waynesville bed-and-breakfast for 15 years — and my gazpacho soup and quiche with salad have brought me compliments from family and friends, I am no longer much of a cook. Living alone these past six years, I mostly subsist on low-calorie microwave meals, bagged salads, grocery store rotisserie chicken, sandwiches, and canned soups. Occasionally I’ll cook up a big pot of chicken soup and live on that for two or three days, but over half of the ingredients come out of cans.

Such as they were, my cooking days are behind me.

Next point to note: reading Kitchen Yarns made me hungry.

The daughter of an Italian-American family, Hood celebrates both of these culinary traditions in her book and her kitchen. Here are almost 50 recipes, all delivered to aspiring home chefs in clear and easy to follow instructions. They range from “Perfect Grilled Cheese” to “My Perfect Spaghetti Carbonara,” from “Indiana Fried Chicken” to “Annabelle’s Risi e Bisi.” Included also are recipes from other cultures: central Mexican guacamole, for example, and Matt Gennuso’s cassoulet.

But Hood is no food snob. She proudly declares herself a carnivore, champions “the deliciousness of American cheese “for a grilled cheese sandwich, especially on Wonder bread and served with Campbell’s tomato soup,” and the delectability of Thomas’ English muffins.

In addition to these delights, Hood uses Kitchen Yarns as a vehicle for telling some of her own story. Like all of us who have lived a long life, Hood has suffered various misfortunes and tragedies: failed love affairs and marriages, the loss of a sister at an early age, and later, still much too early, the death of a brother. Her 5-year-old daughter, Grace, died suddenly “from a “virulent of strep throat.” In the Acknowledgments, Hood writes, “It breaks my heart that my mom, Gogo, didn’t live to see this book in print. But her fingerprints are on every page, and on my heart.”

Some of my favorites in this collection of essays were those in which Hood looks back to her 1960s childhood. In “Love, Lunch, and Meatball Grinders,” for instance, she describes the school lunches prepared by her mother, called Gogo by Hood’s children. “Fried chicken — two pieces — bread and butter, Fritos, a Devil Dog, and half a pound of cherries.” On other days, she might send “a meatball grinder wet with spaghetti sauce, two apples, and a mini blueberry pie.”

At the end of this essay, Hood writes, “My mother built lunches the way some people build skyscrapers or monuments. It wasn’t until I was an adult that I realized they were her Taj Mahal — all of that glorious food jammed into a brown paper bag, made only for me.”

For those of us older folks, Hood’s childhood descriptions will bring back memories of riding in station wagons in the pre-seatbelt days, backyard barbecues where Dad manned the pit and the flames, and schools “where we began our days by wishing the teacher good morning, followed by the Pledge of Allegiance and an off-key rendition of a patriotic song, which is to say it is the 1960s, when kids still hid under their desks to practice what to do when the atom bomb fell.”

Hood’s realistic ruminations on sadness and death may also touch readers who have suffered the loss of a loved one. In the chapter “Comfort Food II,” she writes of her daughter Grace’s death:

“Sometimes I wake at three or four in the morning feeling like I am having a heart attack. But I realize soon enough that what is gripping me is not a literal seizing of my heart. It is instead a metaphorical one. My broken heart is seizing up again, remembering, aching, sobbing.

“What I want to say, to believe, is that it gets better. And in some ways it does. God forgive me, days and days pass in which I don’t think about Grace. How this can be so I don’t know. When she first died, not even a second passed without my thinking of her. Or of the absence of her.”

If you’re looking to give a cookbook as a gift, or as a comfort to a grieving friend, Kitchen Yarns might be perfect for you.

Recently, I spent an evening with my son’s family in Asheville. My 12-year-old granddaughter read Debbie Tung’s Book Love, which I had included in a belated Christmas gift basket to the family, in one sitting. Just before bedtime, the family gathered before a fire in the living room, where their mother read aloud to them from a book of religious meditations and then asked some questions of the older children based on that reading. The next morning, I found my son, the early riser of the crew, reading a book in the living room.

In these crazy times in which we now live, when everything seems a swirl of chaos and mistrust, certain books can speak to us, taking us away from the madness that has affected so many, giving us comfort, however temporary, and providing us with a vision of who and what we are not found in the daily headlines.

Look for those books — the good, true books — and listen to them.