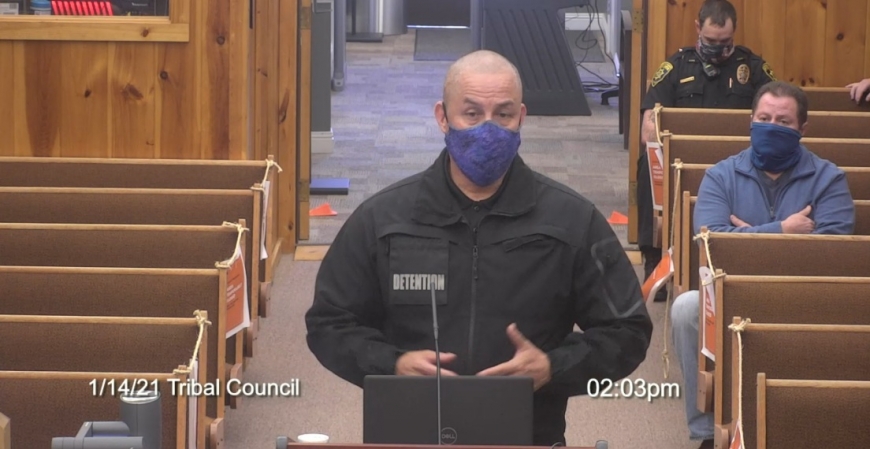 A trio of resolutions seeking to put three alcohol-related referendum questions before Cherokee voters this year was withdrawn in Tribal Council Jan. 14 but will likely reappear on the agenda this spring.

Tribal Alcoholic Beverage Control Commission Chairman Pepper Taylor told Tribal Council that his board hoped to place the questions on the ballot for either the June 3 Primary Election or the Sept. 2 General Election, but tribal law states that referendum votes must be carried out within 90 days of the resolution being ratified. If Tribal Council had approved the resolutions Jan. 14, then the referendum vote would have had to occur by the end of April. Council agreed to revisit the issue in March or April to discuss placing the issue on the June ballot.

The resolutions proposed bringing three questions before the voters:

• Do you support expanding the sales of malt beverages at retail establishments (grocery or convenience stores) within the Qualla Boundary?

• Do you support expanding the sales of malt beverages and wines at restaurants, hotels and other business establishments within the Qualla Boundary?

None of the 12 council members spoke against the proposal when it was introduced last week, though Birdtown Representative Boyd Owle was the only member to speak explicitly in favor.

“This is diversification right here in our own backyard,” Owle said.

Other council members discussed potential uses for additional revenues flowing from any future expansion of alcohol sales. Chairman Adam Wachacha suggested that council members use the next few months to speak with their constituents about how that money might be best used. Education and substance abuse treatment programs could be potential recipients of the funds, he said.

“I think it would be good if we did have this time to go out and possibly get some suggestions on where this money could potentially be invested, as far as what line items and what programs,” agreed Wolfetown Representative Chelsea Saunooke. “I think it would be a good idea, and with that community input there may be more buy-in for the sale of alcohol on the Boundary, or there might not be. But either way I think that allocation needs some attention. We need to have it set so we know where it’s going.”

Alcohol has long been a polarizing issue in Cherokee, which operated its casino dry for a full 12 years before its members finally voted in 2009 to allow alcohol sales on casino property — but nowhere else. However, despite tribal members repeatedly striking down additional referenda seeking to expand its availability, an increasing number of restaurants located off of casino property have begun offering alcoholic beverages in recent years. This is due to the combination of a 2011 tribal law and a 2015 state law, which together meant that the TABCC could grant permits to establishments located within 1.5 miles of a Blue Ridge Parkway on-ramp, and for one-time events such as festivals, among other select situations.

The tribe held referenda asking voters to loosen restrictions off casino property in both 2012 and 2018 — and both efforts failed. Tribal law states that “no decision approved or denied by the voters on an issue shall be reconsidered by Tribal Council for two years.” Because the last referendum vote on the issue took place in May 2018, that two-year waiting period has been satisfied.

The 2018 referendum, which sought approval for a tribally owned package and ABC store, failed on two fronts when it received a turnout of less than 30 percent and an approval percentage less than 51 percent. Only 47.4 percent of voters said yes to the question, and turnout clocked in at only 25.56 percent. However, that referendum vote took place in a special election — placing the question on a Primary or General Election ballot would likely yield greater participation.