For what would you lay down your life? 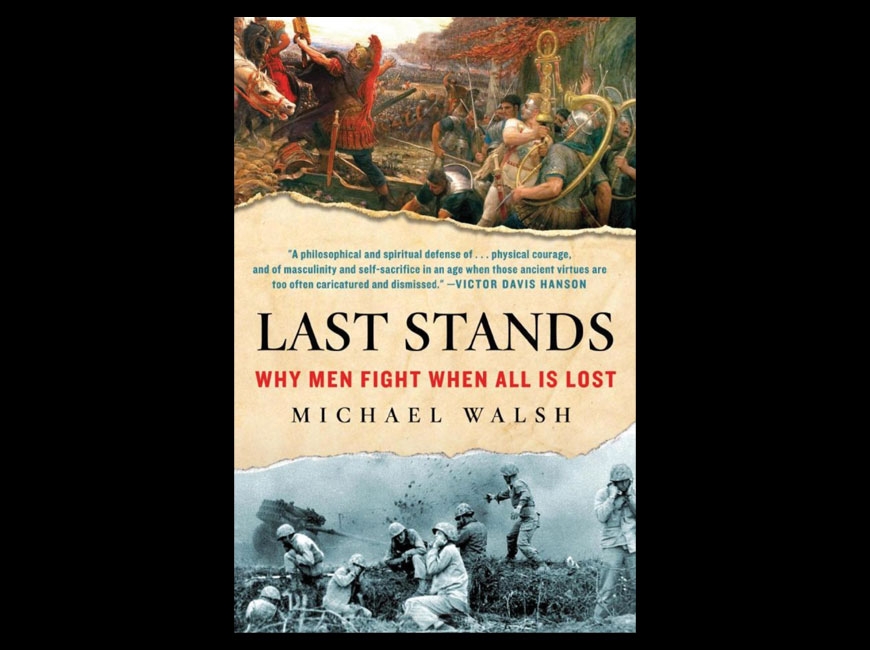 Not everyone will enjoy Michael Walsh’s Last Stands: Why Men Fight When All Is Lost (St. Martin’s Press, 2020, 358 pages). His thoughts in the Introduction regarding masculinity and traditional reasons why men have fought wars since the dawn of history — to protect their women and children, their homes and homeland — may offend some.

Remarks such as “The only culture that won’t defend itself is one bent on suicide” will rouse the ire of the cancel culture crew. He points out the dangers when heroism in war becomes politically incorrect or when we denigrate our Western democratic institutions, which will anger those who wish to see those laws and governments dumped in history’s trashcan.

This is unfortunate, for in addition to asking some provocative questions Last Stands brings to life some of the most savage battles ever fought. Thermopylae, Masada, Rorke’s Drift, and 15 other engagements. Walsh puts his readers on these battlegrounds, describing the terrain and the weather, the opposing forces, the weapons possessed by both sides, and the kind of men who carried those swords, spears, and guns.

He also recreates the brutality of these fights to the finish when warriors battle against overwhelming odds, savagely struggling with all their strength while knowing that their cause may well be lost. In his account of the Battle of Cannae, for example, when Carthaginian forces surrounded and slaughtered an entire Roman army, Walsh includes this description from the Roman historian Livy regarding the aftermath of the battle:

“But what most drew the attention of all the beholders was a Numidian who was dragged out alive from under a dead Roman, but with a mutilated nose and ears; for the Roman, unable to hold a weapon in his hands, had expired in a frenzy of rage, while rending the other with his teeth.”

At Cannae the Carthaginians enslaved some of their captive Romans, but often the defeated either went down fighting, committed suicide — the Jews at Masada, some of Custer’s men at the Little Big Horn — or were executed on the field of battle, like the defenders of the Alamo.

Walsh does his readers a great service by laying out the background of these contests. Over the years, I have read a good bit of military history, and know of the history behind such conflicts as Shiloh, Hastings, and the Chosin Reservoir, but the siege of Szigetvar in Hungary was completely unfamiliar to me. Here Walsh blends evidence from an epic poem, The Siege of Sziget, with historical facts about this clash. He recounts the driving forces behind this battle between the Muslims and Christians, shows that both sides had great respect for the military prowess of the other, and tells us of the conflict’s importance on a large scale. “The Ottomans,” Walsh writes, “won the month-long battle, but at very great cost — upwards of 20,000 men — so great, in fact, that they abandoned their push toward Vienna.”

One theme running throughout Last Stands is why soldiers sacrifice themselves in this manner and whether we today would do the same. Regarding the Battle of Szigetvar, Walsh cites these lines from The Siege of Sziget, attributed to the leader of the Christians shortly before the massacre of his soldiers:

We have lived nobly, let us die nobly,

Give the entire world an example by it;

Today we bring dignity upon our names,

This gilds all past actions.

Walsh then asks: “Does anyone in the West still think and talk like that? Do we still have a concept of what it is like to live — and die — nobly? ... Who still believes in going to eternal joy? Or is self-sacrifice a fool’s errand, a suicide charge into oblivion, which the world will little note and not long remember? If nothing is worth dying for, then what are we living for?”

His questions set me to thinking about our own time. The firefighters who raced to their deaths in the Twin Towers on 9/11, the men aboard United Airlines Flight 93 who on that same day charged the terrorists on board that aircraft, the military personnel who have exhibited bravery in our never-ending conflicts in the Middle East: yes, people still exist who willingly give their lives for others.

But Walsh’s questions made me ask questions of my own. Are there enough of those people who still believe in the value of sacrifice to carry our country through a major conflict? More importantly, what are the things worth dying for? I think I can say with assurance I would lay down my life for my children and grandchildren, and for a few friends. With much less surety, I hope I would die in defense of my religious faith.

Given the political chasm that today separates so many of Americans and a culture fractured by decades of bickering and arguing, I then wondered how many of us would still be willing to take up arms in defense of our nation.

“Only the dead have seen the end of war” runs the old adage. If true, what will our response be should war come to us?