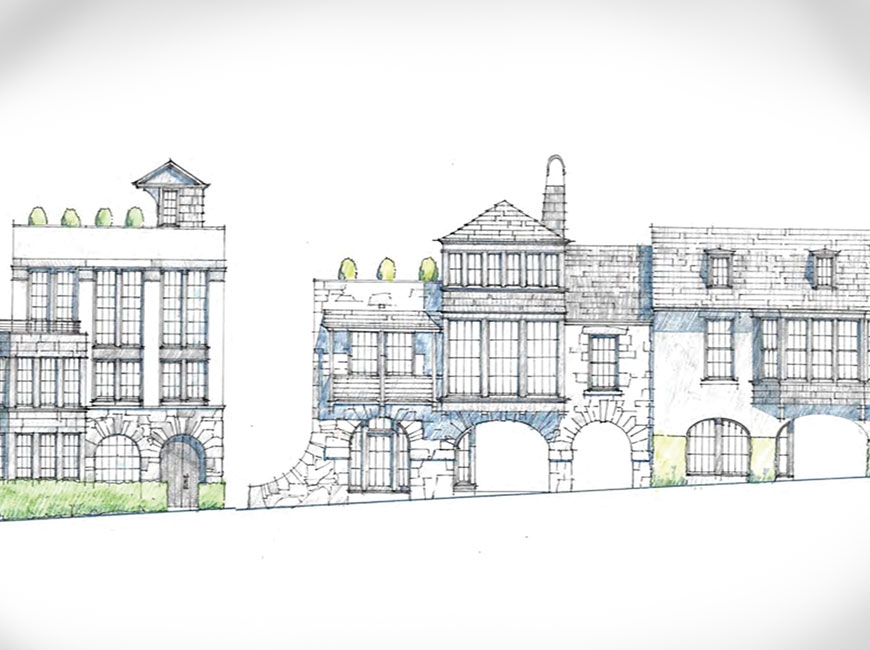 The future of a massive development proposed for the Cashiers crossroads is still up in the air following a Jan. 6 meeting of the Cashiers Area Community Planning Council.

During the three-hour session, board members sifted through 31 applications from community members seeking recognition as parties with standing during the quasi-judicial hearing that will determine if the development moves forward. Of the 31 applicants, 11 received standing, 11 were admitted as witnesses but not as parties, six were denied admittance as either witnesses or parties and one voluntarily withdrew. Two applications were tabled for later action.

The evidentiary portion of the hearing is now scheduled for 9 a.m. Monday, Jan. 25, and according to County Attorney Heather Baker it could easily require an additional day to complete.

At issue is a special use permit request from Atlanta-based Macauley Investments. The developer is proposing a project that would bring 726 residential units and 158,557 square feet of commercial space to a 55.5-acre area in the northeast corner of the N.C. 107 and U.S. 64 crossroads. The development could easily double the community’s year-round population, which is currently estimated at 1,500, though it swells up to about 30,000 during the summer. The proposal has spurred widespread opposition on the plateau, with a community-funded legal defense fund raising more than $50,000 and a petition to stop the development gathering more than 21,000 signatures so far.

To decide whether to grant the permit, the Cashiers Council must conduct a quasi-judicial hearing — a proceeding with rules and format very similar to a formal court hearing — and vote as to whether the proposal meets each of six criteria. A majority of the seven members must vote yes on each of the six for the permit to be granted.

• That the development will not endanger public health or safety.

• Is reasonably compatible with the site’s natural and topographic features.

• Will be in harmony with the community’s scale, bulk, coverage, density and character.

• And will not cause a traffic hazard or undue congestion.

Appealing the decision will require filing a case in Jackson County Superior Court.

If the Cashiers Council approves the proposal, it will then go to the Jackson County Planning Board to ensure compliance with the county’s major subdivision ordinance, triggered for projects containing more than eight lots. No public hearing is required prior to that vote, but there will be opportunity for informal public comment.

The hearing before the Cashiers Council was originally scheduled for Nov. 16, but attorney John Noor, who represents five adjacent property owners, asked the board to reschedule so as to allow him time to secure the witnesses necessary to make his case against the proposal.

During the Jan. 25 hearing, parties with standing will be able to participate as official parties to the action — such as by having counsel represent them or calling in witnesses, for example — and would be named on any lawsuit originating from the hearing’s outcome. Non-party witnesses would be allowed to ask questions and present evidence, but they would not be legal parties to the action and would not be noticed regarding any further proceedings.

State law narrowly defines who can be granted standing in such a proceeding, Baker told the board Jan. 6. That definition includes someone with a legal interest in the property, such as an owner or tenant; the applicant; the county where the hearing is conducted; an association that has at least one member who has standing; and a person who will suffer “special damages” as a result of the decision.

“One of the best ways to look at a party with standing is to say, ‘Is this person’s potential damages different from someone in the community as a whole?’” Baker instructed the board. “If anyone in the Cashiers area can say, ‘Yeah, I can say the same thing,’ it’s probably not special damages.”

Over the course of the three-hour meeting, board members wrestled with that definition as they heard from resident after resident claiming that the development would wreak havoc on an already out-of-control traffic situation, damage their property values and endanger their water supply. Often, the right decision wasn’t crystal clear, with the two attorneys — Noor and the developer’s attorney Craig Justice — passionately arguing opposing viewpoints on how to handle individual applications.

“One of the things that’s most important is that you’re consistent in who you allow in with standing,” Baker said.

Overall the board tended to grant standing to adjacent property owners who were downhill from the proposed development — resulting in worries related to landslides and stormwater — or who relied on a water supply potentially threatened by the proposed development. Traffic was also a consideration, though board members tended to put more weight on concerns related to property access via secondary roads than on worries related to congestion on U.S. 64 and N.C. 107. Everyone in the community relies on those highways, so general impacts to their utility would not constitute “special damages.”

There was some disagreement between Noor and Justice as to what level of evidence prospective parties were required to have at this stage of the proceedings. Noor told board members that at this stage, applicants are required only to allege damage, with the evidence portion coming into play at the actual hearing, but Justice said that even at the application stage certain types of allegations require expert testimony, especially statements about traffic or property value. Baker said that Justice was correct, and determinations of standing must be based on what applicants could present or prove at the time.

However, Noor pointed out that any applicant can testify as to what they’ve seen and heard firsthand. Steve Johannessen, who owns a business across N.C. 107 from the proposed development and was ultimately admitted as a party with standing, was one such example of that.

“Even though I’m not an expert, I’ve been in business for 15 years in the same location, and I know the traffic patterns on this road intimately,” he said. “They’re seasonal, but it’s really, really important to note that there’s a chokepoint at Frank Allen Road for the left turn lane. The more traffic there is, the less business we get, because people cannot turn onto our property.”

While Johannessen could testify to conditions that he’d witnessed firsthand, expert testimony was required to back up his assertion that the proposed development would “dramatically” increase that congestion, which would in turn compress the value of his property during the five to 10 years it will take to build the development — just as he’s looking to sell out and retire.

In addition to traffic, fear of restricted water supply was a common theme among the applicants.

“Our biggest concern is we’re on a private well,” said Monte Vista Road resident Mary Ellis, who was admitted as a party with standing. “In fact, during a period of drought we even had to drill a second well, which subsequently went dry, so water availability is a big concern.”

“The eight residences that’s on our property are on a spring, not a well,” added Gana Sita Circle resident Brent Mills, who was also admitted as a party. “I feel it will be directly affected by a couple thousand residential homes being built next door.”

A 2018 McGill Associates report commissioned by the Tuckaseigee Water and Sewer Authority indicates that these fears could be valid.

“Despite unusually high levels of precipitation for the state, the groundwater supply in the Cashiers area is limited and has historically proven to be difficult to access due to the underlying geology,” the report reads.

Of the region’s 84 inches of annual precipitation, 41 inches evaporate, 7 inches leave the area as surface runoff and 36 inches leave as groundwater runoff. That leaves 36 inches per year for groundwater recharge, the report shows. Most wells on the plateau rely on fractured bedrock aquifers to stay wet.

“When the region of affected groundwater for two or more wells overlap, i.e., those wells are in competition with one another for the same aquifer, those wells are said to be exhibiting well interference,” the report states. “Since many of the wells in the study area are located on common fractures, there is often a high degree of interference between wells that otherwise might appear to be spaced adequately to prevent interference.”

Other applicants expressed concerns about noise and light pollution, as well as about the potential for landslide activity.

“The proposed five buildings behind my house are multifamily houses, so large, and they are on the steep incline, and so I do believe that that type of topography is wrong for those types of buildings,” said Bustle Lane resident Yvonne Johnson, who was admitted as a party with standing. “I’m afraid of a landslide down onto my property and furthermore the properties directly below me.”