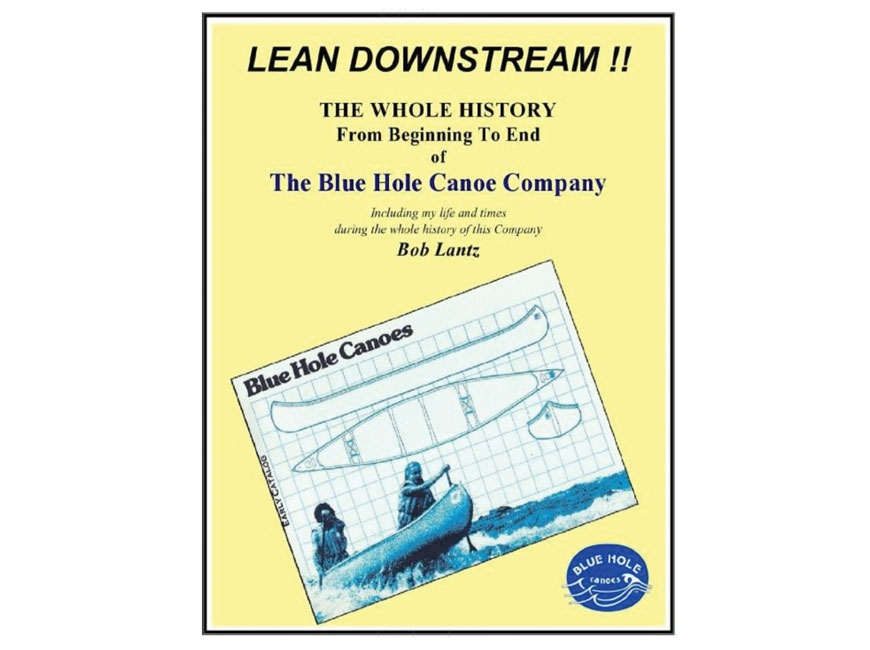 One fond childhood memory involves a yellow fiberglass canoe and the Yadkin River. My dad, one of my younger brothers, and I took to those waters several times, and when I was a teenager, my brother, a friend, and I made several overnight trips without adult supervision, camping on islands, cooking over an open fire, and pushing off again the next day.

When I was in my thirties, a friend gave me his battered, old aluminum canoe, which he had dubbed “The Gray Goose,” and my wife, my children, and I took that out several times on the rivers and lakes of Western North Carolina. Later, I sold that canoe for a song when I moved from Waynesville to Asheville, a sale I’ve since regretted.

Though now long canoe-less, I have thought about renting one of these craft and once more paddling down some river. Like several other such adventures, I keep putting this one off, but as the years pile up so too does the pressure to hit the water once last time.

In Lean Downstream!!! The Whole History From Beginning to End of the Blue Hole Canoe Company (Paddlers Press, 2020, 231 pages), Bob Lantz fired up the memories of my time spent with a paddle in my hand. In this book, he tells readers of his own adventures on the water, why and how he transitioned from aerospace engineer to founder of a canoe construction company, and his later work for Disney in Orlando and as a teacher in a community college in Tennessee.

Though I skimmed or skipped large portions of the middle of this book, which focuses on topics like canoe design and building materials, real river rats might revel in Lantz’s descriptions and the challenges he faced from the blueprints to the final product. What most interested me instead were his accounts of his personal life, his struggles to make a go of his various enterprises, and his views on education.

An example: Near the beginning of Lean Downstream!!! Lantz tells us that when he left for college in Georgia, he could write clear, solid prose. Though he describes this ability as a talent, somewhere through his elementary and secondary school he developed that talent, and it stood him in good stead whether writing reports or submitting a business plan to a bank: “And when I began to work in aerospace, being an engineer who could write a reasoned and logical report got me early career notice.” His mention of this skill at different times in the book struck me forcefully, because I have long advocated that in our “age of communication” we need to teach our young people to write better.

Lantz’s story is also quintessentially American. Here’s a guy who wasn’t afraid of hard work — in engineering school he held two jobs and fell asleep during one of his exams — and who after studying possibilities dared to take risks. Small business entrepreneurs of all backgrounds could learn some lessons from his description of the early days of the Blue Hole Canoe Company: the importance of a company logos, the value of personal contacts, marketing tactics, writing a monthly newsletter, dealing with bankers, and even the design of T-shirts. Most importantly, perhaps, Lantz illustrates the vital role of passion in undertaking any business enterprise, a belief in one’s self and in the product.

He also writes honestly of his failures, both in his personal life and in his business. In “Hitting Rock Bottom,” where he describes running another car off the road while illegally trying to pass a truck carrying chickens, he uses that incident as a sort of metaphor for his failing company. His descriptions of negotiations at this time, where he describes himself as “Naïve Bob,” might also offer some lessons to small business owners.

In addition to his various skills, Lantz also brings humor to these pages, poking fun at himself more than others, and making the reader smile when he describes overturning a canoe or trying to convince his paddling instructor Dottie Adams that he is at the intermediate level rather than a beginner.

On the back cover of his book, Lantz explains, “Calling out ‘Lean Downstream!’ is the same as saying ‘Survive!’” The Blue Hole Canoe Company didn’t survive, but Bob Lantz did. In fact, having read his book, I’d say he did a whole lot more.

So I made this New Year’s Resolution to read some older books this year, and I’m still making my way through Ivanhoe, but four days ago I set Sir Walter Scott’s classic novel aside to reread Thornton Wilder’s “Our Town,” which I taught several times to students. Though it doesn’t classify as an old book by my standards — the play was first performed in 1938 — I needed to review the script for another article I was writing.

Though some readers may find “Our Town” dated or its values old-fashioned, it speaks loudly to us in our time of pandemic and political animosity. The play reminds us of the importance of family and neighbors, of common sense, and of what it means even today to be an American. If you’ve never read this play or seen it performed, I highly recommend it to you.

And at the end of the last act, one of the main characters, Emily Webb, also reminds us to pause now and again, and look for the beauty beyond our stressful lives, the mystery of what it means to be a human being on this globe swirling through space.

Next book for review (I hope): Michael Walsh’s Last Stands: Why Men Fight When All Is Lost.