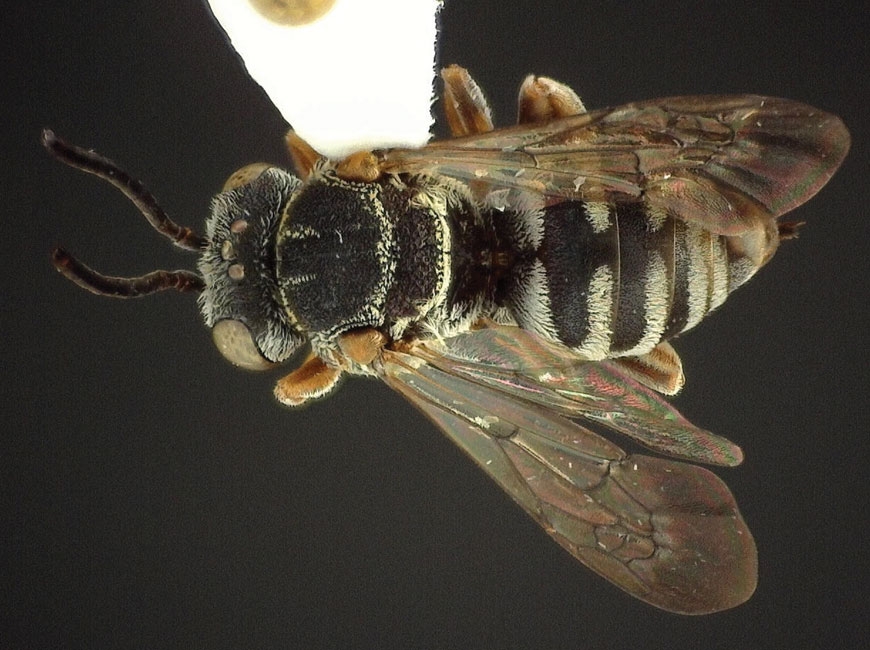 A pair of observations logged in 2019 marked the first time this newly recognized species, the cellophane-cuckoo bee, had been observed in the Great Smoky Mountains National Park. Donated photo

Will Kuhn, director of science and research at Discover Life in America, said the bee, Epeolus inornatus, was found during two observations off Baskins Creek Trail, located just outside Gatlinburg.

“We collected this back in 2019. We had a study going, sampling for insects at a couple of different places in the park after the 2016 Chimney Tops 2 Fire,” Kuhn said.

Researchers were looking to see “if the fire was having long-term effects on the biodiversity, looking for turnover in the plant life, which would result in turnover in insects,” he said.

“The Baskins Creek area was pretty much burned to the ground,” he said.

Discover Life in America is a nonprofit whose main project, the All Taxa Biodiversity Inventory, is dedicated to cataloguing every single species within the Great Smoky Mountains National Park’s 816-square-mile boundary.

The newly described bee species, given the common name “cellophane-cuckoo bee,” was observed in the park on June 28, 2019. Kuhn posted images of the bee to iNaturalist, an app and website that shares data with experts around the globe.

“The world expert on this genus, who had actually recently named this particular bee species, identified it for us,” Kuhn said. “We noticed we didn’t have it on our list of park species. It’s probably been here before, we probably just hadn’t detected it,” he said.

The new bee is called the cellophane-cuckoo bee because it is a kleptoparasite — a creature that habitually robs food from animals of other species — of the cellophane bee.

“Cellophane bees are solitary bees, not social, like honey or bumble bees,” said Kuhn. “Lady cellophane bees dig little nests in the ground for their larvae. They paint the walls of each little cell with this glue-like stuff that dries like cellophane to protect their eggs from mold and moisture. They make a little cell, fill it with pollen for their larvae to eat, then lay an egg and seal the cell up with cellophane.

The bee was identified by Thomas M. Onuferko, of the Department of Biology at York University in Toronto. It was one of 15 newly recognized bees of its genus described in a scientific paper published in May 2018.

Kuhn said the cellophane-cuckoo bee is known to pollinate only two plants. One is a relative of the blueberry called the farkleberry, and the other one is the turkey oak, which is a type of red oak.

So far, the ATBI has identified 1,028 species in the park that have never before been seen on earth. However, the cellophane-cuckoo bee belongs to the larger group of 10,411 species the inventory has identified that may have been seen other places before but had not been previously documented in the park. The bee in question is found across the Southeastern United States from Texas to New England.  In all, the ATBI has logged 21,080 unique species in the park.

That number is likely to grow. Kuhn said his group “already has several other species that we need to confirm, that seem to be other new species records for the park. We have a backlog of, particularly, insect material, waiting for their secrets to be revealed.”

(Jonathan Austin is the editor of Smoky Mountain Living Magazine.)