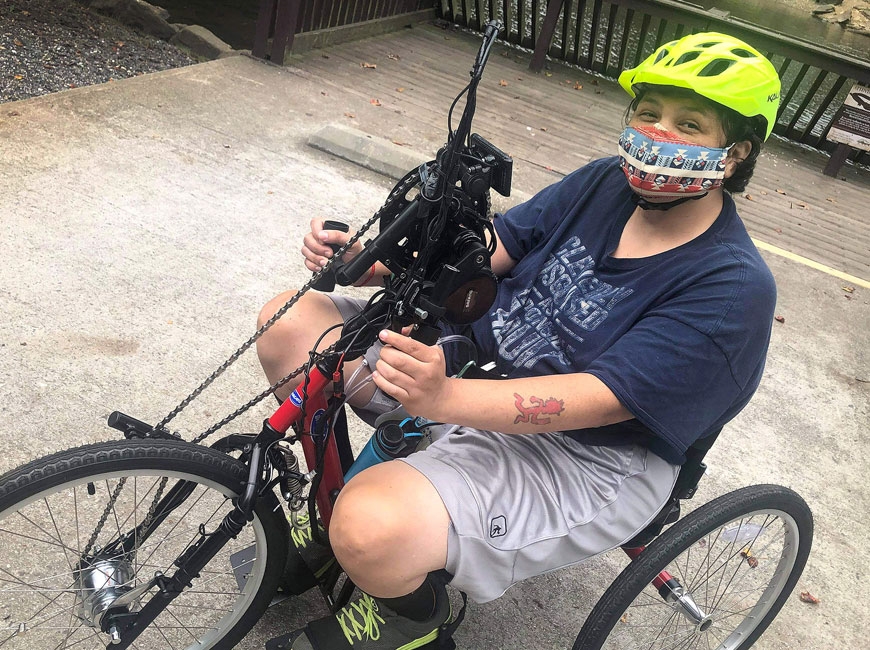 The handcycle allows Bradley, whose legs are paralyzed, to power the bike with her arms. Donated photos

Maranda Bradley knows exactly what her 2015 self would say if she knew what the 2020 version was up to now.

“‘You’re crazy. You’re in a wheelchair. You can’t even hold your bowels.’ That’s what I would say at this point,” said Bradley.

In the summer of 2015, Bradley, now 36, was in a devastating car accident. Her aunt was driving, she was in the passenger seat and her then-3-year-old daughter Kristin was in the back seat — on the driver’s side, thankfully. They got t-boned on the passenger side, and a spinal cord injury left Bradley’s legs paralyzed.

That medical history might make Bradley an unlikely candidate to complete the 950-mile Remember the Removal bicycle route that her fellow Cherokee tribal members make each June to commemorate the tragic Trail of Tears. But in 2021, that’s exactly what Bradley plans to do, just in September rather than June. The weather will be cooler then, and September also happens to be National Spinal Cord Injury Awareness Month.

“I feel that God wants me to do this — as a Cherokee woman, as somebody in a wheelchair, as someone who was not supposed to live,” said Bradley. “I died twice. It’s just saying, ‘Hey, God can do anything through me.’ I want to change the face of what disability looks like.”

Putting the pieces together

The idea came to her in April 2018 when she attended the Cherokee Choices Stress & Healing Arts Retreat. The Remember the Removal riders were there, talking about their experiences and urging attendees to think about going themselves. Their stories ignited Bradley’s imagination, but as a woman in a wheelchair, it seemed like an impossible dream.

At that point, Bradley had never tried a handcycle before. In fact, it had been more than two decades since she’d done much in the way of physical exercise at all. She’d loved playing basketball as a kid, but that stopped around the time she turned 12. It was a traumatic year for Bradley — she was diagnosed with scoliosis and she injured her knee, spurring years of physical therapy. But the deeper wound of that year was her dad’s decision to leave the family.

“It was a real rough time,” said Bradley. “A lot of my mental health declined because of that, and then I grew up just out there, doing whatever I wanted to do, not caring about nobody, not even myself. Now, being a mother, I want different for my own child.”

Bradley believes the bicycle trip to be a calling from God, and since receiving that calling in 2018, she’s watched the logistics fall into place. Meanwhile, she’s been working hard to get her body fit and healthy for the journey.

At the time of the accident, Bradley weighed about 330 pounds. Now, she’s down to 215, and counting. It’s a constant effort to stay true to her workout schedule and her diet, resisting the ever-present temptation to fill her stomach with empty calories. In terms of diet, the pandemic put her in a downward spiral — she kept doing her workouts, but had a hard time keeping her diet healthy. 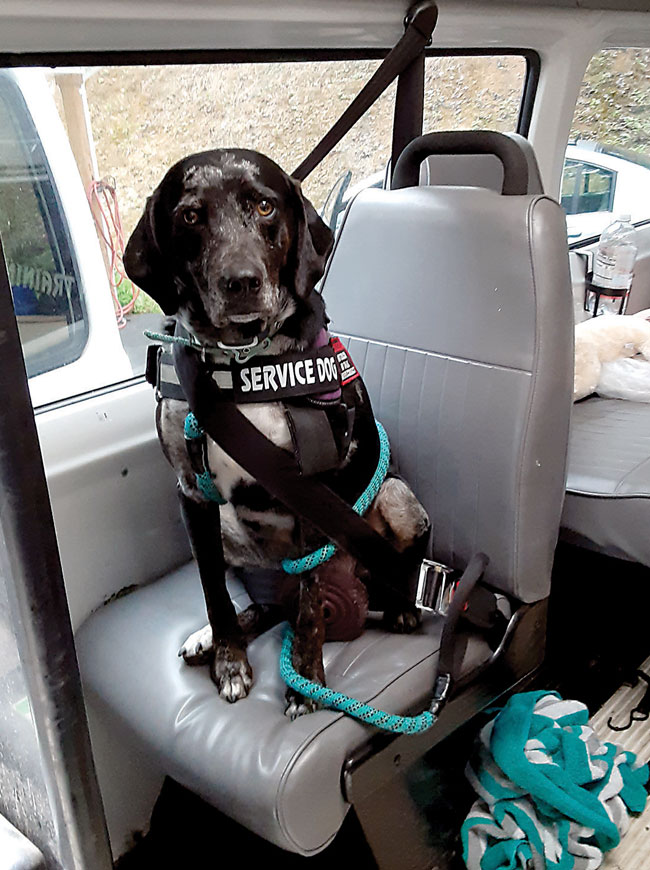 Maranda Bradley’s service dog Amilyah will join her for the ride next fall.

Throughout all this, though, unresolved questions remained surrounding how she’d find a bike and who would go with her on the journey. This year, those questions have received an onslaught of answers.

Bradley found the perfect bike at an adaptive sports store in Greenville — it’s high enough that she can transfer herself between bike and wheelchair, and it’s got a motor to help her up the hills — and this summer she received an Easterseals UCP Healthy Living Grant from the N.C. Department of Health and Human Services that covered the entire $5,800 price tag. She called the grant a “God blessing.” Before receiving it, she had no idea how she’d ever afford such an expensive bike.

A friend of the family offered to cover the cost of a 14-passenger van that she’ll use as a support vehicle for the trip, and another friend will travel with her to watch out for her left side, as Bradley’s vision isn’t very good there. Still another will bike it with her. An out-of-state veteran she connected with who is also in a wheelchair will go with her as well, as will her daughter, now 9, who attends an online charter school. Her service dog Amilyah will come along, and her personal aid will drive the van.

Thanks to a wrong turn that Bradley believes was in fact meant to be, she ended up meeting a man who makes his living working with paracyclers all over the world. He adapted her bike to fit her particular needs and wants to offer mechanical support for the trip itself, though she must raise money to fund his services.

“That was supposed to have been a wrong turn, but it wasn’t,” she said. “It’s like things are manifesting along the way, things that don’t make sense.”

That’s not to say there haven’t been setbacks. Bradley’s training took a hit this year when a pair of injuries kept her in a boot for the entire summer. On May 21, she fractured her leg in two places when nerve spasms caused it to fall off the footplate of her wheelchair and smack into the door. At the end of August, another spasm caused her to chip a bone in the other ankle. Now she has straps on the chair to keep that from happening again, but the injuries kept her in a boot from May through October. She didn’t get to ride much this summer.

“That put me really far back,” she said. “I couldn’t stand on my standing frame, and I was getting used to doing that at least two or three times a week. Now I’m doing it every day.” 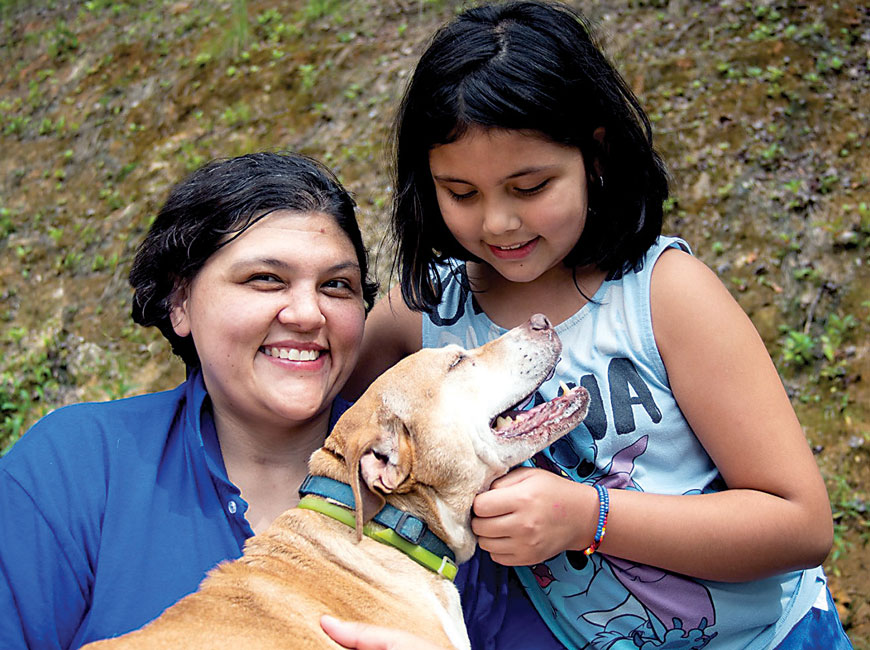 Bradley shares a moment with her daughter Kristin and Lita, one of the family’s three dogs.

The standing frame is important for Bradley to build strength and bone density — sitting all the time can make the bones weak and brittle.

The cold weather has also challenged Bradley’s progress. She can’t bike much during the winter, but when the weather’s nice, she gets out and rides, for now mostly just up and down her driveway repeatedly, an hour or more at a time.

It’s hard to say what September will bring. Nobody has ever done the Remember the Removal route on a handcycle before, and while Bradley is resolved to do as much of the 950-mile route as possible, planning for 50-mile days, she knows she’ll have to skip at least some sections. Some will be too hilly, and others will be on roads too dangerous for her particular set-up.

But Bradley is going with the full endorsement of her tribe, which has provided her with maps to navigate her journey and a network of people and organizations to help her along the way. She’s also received permission to use the tribal seal on the T-shirts she’s printing for her supporters.

Instead of the Trail of Tears, she’s calling it the “Trail of Love.”

“I want to do this as remembering our ancestors, but I also want to bring the love of God to it,” she said. “To show God is in the middle of your pandemic, your bad lifestyle choices, your whatever.”

Her favorite verse is the oft-quoted Philippians 4:13 — “I can do all things through Christ who strengthens me.” It’s been her mantra, and she plans to continue living by those words once she returns home. Bradley wants to be a voice for the voiceless, and particularly for Cherokee people with disabilities. There’s an acute need for more local adaptive services and facilities, she said — without them, people are living isolated lives devoid of the community and stimulation they need to thrive.

“Nobody thinks about what I have to go through,” said Bradley. “It’s hard, living from a wheelchair, not being able to walk, and having to have an aid to go with me and drive me places.”

Her new, healthier lifestyle has given her a whole new lease on life. She wants to see the tribe and the region expand infrastructure and opportunities for people with mobility challenges, and she wants to show people with those challenges that it’s still possible to hope.

“From my experience, your faith and what you believe in plays a big role in your body, what you put in your mind,” she said. “If you’re always thinking negative thoughts, that’s where your body will go. But if you think higher thoughts — ‘I will walk today. I will do great today’ — you will go far.”

The 2015 version of Bradley might think the 2020 version is nuts, but that’s OK. Bradley knows that the best version of herself lies ahead, not behind.

Maranda Bradley needs help funding her attempt to handcycle the 950-mile Remember the Removal route next year. She is hoping to raise $20,000 to defray the cost of the trip. Donate online at www.gofundme.com/f/21lb3e4hio.