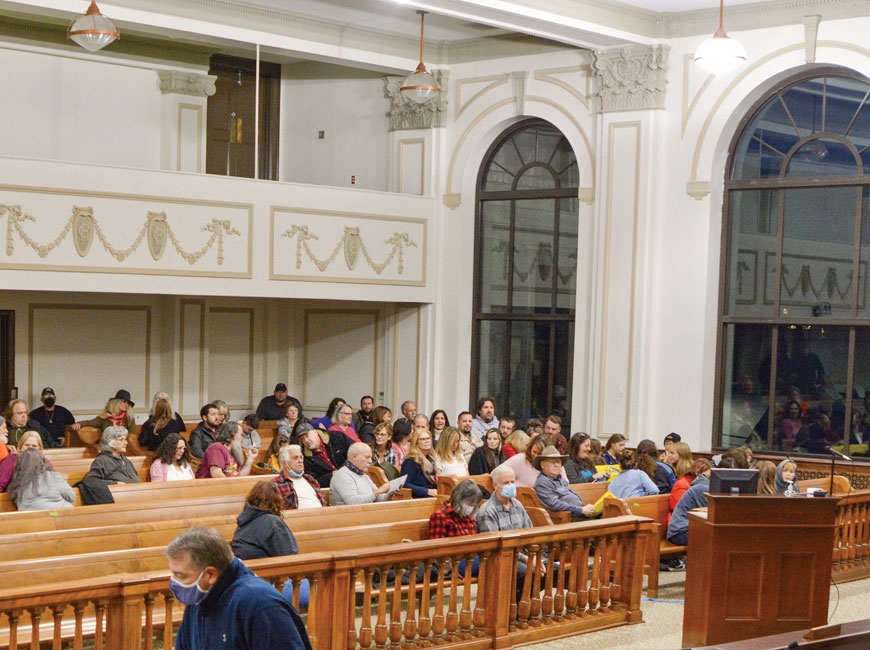 A substantial crowd waits for a Waynesville Board of Aldermen meeting to begin. Cory Vaillancourt photo

A routine update to the Town of Waynesville’s State of Emergency ordinance finally passed on Dec. 8 after being tabled for weeks due to an uproar among anti-mask citizens who embarked on a marathon series of public comment sessions in fear that the town was also planning to enact a mandatory mask-wearing edict.

Such ordinances typically outline which municipal officials can declare a State of Emergency, and for what reasons. When that does happen, local governments can exercise emergency powers in an effort to let first responders address the situation.

Waynesville’s previous ordinance, passed in 1987, was recently found to be based on a General Statute that had subsequently been repealed. Town Attorney Bill Cannon drafted a replacement that took the relatively broad 1987 ordinance and narrowed its focus in several important ways.

Previously, the ordinance said that a State of Emergency would be deemed to exist if “… for any reason, municipal public safety authorities are unable to maintain public order or afford adequate protection for lives, safety or property.”

The new ordinance does away with the “for any reason” clause and delineates the very limited, specific reasons for which a State of Emergency might be declared.

Those specific reasons are “ … an occurrence or imminent threat of widespread or severe damage, injury, or loss of life or property resulting from any natural or man-made accidental, military, paramilitary, terrorism, weather-related, public health, explosion-related, riot-related cause, or technological failure or accident, including, but not limited to, a cyber incident, an explosion, a transportation accident, a radiological accident, or a chemical or other hazardous material incident.”

Another important way in which the new ordinance tightens the scope of emergency powers is in establishing a hierarchy of who may declare an emergency.

Despite the more limited purview of the new ordinance, opponents called it “tyranny” when they disrupted an Oct. 27 Waynesville Board of Aldermen meeting, some claiming the new ordinance was meant to pave the way towards a mask mandate, forced vaccinations and involuntary microchip implantation.

As that meeting evolved into disarray, Alderman Jon Feichter tabled the proposed new ordinance, where it remained until Dec. 8.

In the interim, many citizens continued to push objectively false information about both the practical and philosophical reasons for updating the ordinance.

Nikki White, publisher of the now-defunct Moxxie Magazine, posted two videos on Facebook declaring the citizenry “under attack” by a “tyrannical mayor” seeking “limitless power,” despite the proposed new ordinance limiting both the power of and the valid reasons for Waynesville Mayor Gary Caldwell and all future Waynesville mayors to declare emergencies.

White was among the nearly 100 people who showed up to the Dec. 8 Board of Aldermen meeting unmasked and packed in pews on one side of the Historic Haywood Courthouse, where the meeting had been moved in anticipation of a large crowd.

Alderman Anthony Sutton immediately made a motion to un-table the proposed new ordinance and present it for consideration at the meeting. Alderman Chuck Dickson seconded Sutton’s motion, which was supported unanimously by the board.

Caldwell then doubled the board’s customary 30-minute public comment session, and ended up adding another 30 minutes to the end of it so that all those who wished to speak at the meeting were able to do so.

Stephanie Parsons told alderman that in addition to covering “our image of God,” masks put the body in an acidic state, a claim refuted by Politifact, The Irish Times and Agence France-Presse as early as this past May.

She also said without context that current PCR tests were indicating false positives — revealed by Dr. Andrew Cohen of www.icd10monitor.com to be between 0.2 and 0.9 percent. Parsons’ claim that “hospitalizations are down” was also false according to the state’s COVID-19 dashboard.

Parsons went on to call the Coronavirus Pandemic “a fraud” and North Carolina’s Gov. Roy Cooper “tyrannical.” Hours earlier, Cooper issued a modified stay-at-home order after expressing shock at daily positive case numbers that had recently doubled from a month ago to more than 6,000 cases a day. Three days after Parsons’ comment, that number had climbed to 7,540. 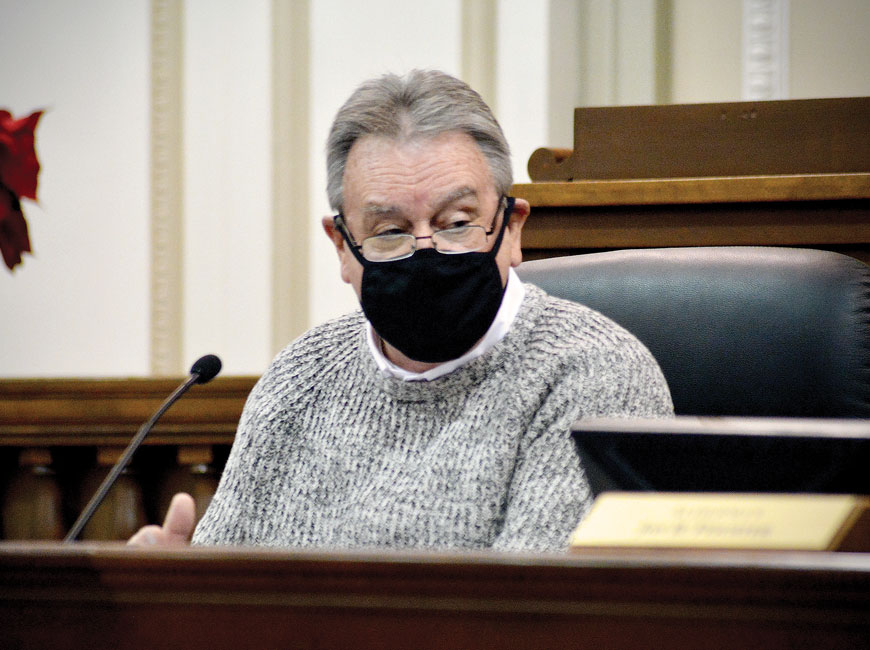 Another speaker, Janet Presson, said she didn’t live in Waynesville but since she owns property in the town, she thought she deserved the opportunity to oppose the ordinance and giving “more power” to elected officials.

It wasn’t the first time in the spotlight for Presson, whose Facebook page is filled with memes and posts calling masks “child abuse” and urging others to discard their masks.

In July, 2019, Presson spoke at an anti-vaccination event where she and Melanie Williams attempted to prevent members of local media from recording or photographing the presentation, held at the Haywood County Public Library in Waynesville.

During the presentation, an anti-vax documentary rife with debunked claims based on discredited studies was screened.

Still, Presson serves on the board of the Haywood Healthcare Foundation, which oversees around $13 million in taxpayer money that’s supposed to be used “to improve the health status of Haywood County, it’s [sic] individuals and families through educational programs, grants, scholarships, and leadership opportunities,” according to its website.

Williams was also present at the Waynesville town board meeting, during which she told alderman that there were 50 states in the U.S. immediately after the Civil War — Hawaii didn’t become the 50th state until 1959 — and that an 1866 U.S. Supreme Court ruling prohibits states from enforcing a number of pandemic-related restrictions, like social distancing.

Called ex Parte Milligan, the ruling has been cited frequently by conspiracy theorists as justification for defiance, but in reality it has nothing to do with the power of federal, state or local governments to enact such restrictions, according to Snopes, USA Today and others. It deals with military tribunals.

Several youths spoke at the board meeting, including 16-year-old Jordan White.

White was one of five children that spoke; Evelyn McDonald, 10, read from an essay that lamented the loss of freedom. Jake Durbin, also 10, called the ordinance “barbaric and stupid,” and then cried. Savannah Williams, 16, said she was sad that she had to quit her volleyball team because she refused to wear a mask. Katie Durbin, 14, said it’s “not my responsibility to take care of your health.”

One woman, however, did express support for masking up; Diana Gordon said she didn’t like wearing masks either, but that doing so is a “righteous act of kindness.”

The crowd jeered and ridiculed Gordon.

Finally, it was Nikki White’s turn. White, ignorant of local government procedure, demanded during public comment that aldermen vote on the ordinance, and then stood for a moment in silence waiting for a reaction.

When White failed to get a reaction, she cajoled and insulted the board for the remainder of her allotted time, calling aldermen confused and ignorant, telling them they should be ashamed of themselves and that they were the “weakest legislative body in the state of North Carolina.”

White would get her vote in due course — after the public comment session — but it wasn’t the vote she and others wanted. Dickson moved to adopt the new State of Emergency ordinance, and Sutton seconded the motion.

Little discussion ensued until Alderman Jon Feichter spoke, asking the board to consider some changes.

“We need to do it, but we don’t have to do it tonight,” Feichter said.

Feichter was outvoted 4-to-1. After the meeting, he stressed that while he was in favor of updating the ordinance, he thought it should require consultation with public safety personnel like police, fire and health officials, and that it would also be reasonable to include the Board of Aldermen in those consultations.

He also took exception to the tenor of the public discourse surrounding the State of Emergency ordinance update.

“Much of the rhetoric was unhelpful and untrue. We were called ‘deceitful’ and ‘weaponized’ against the very people we represent. We were told that we’re destroying lives of our kids. None of that is true,” said Feichter. “All we’ve done and all we continue to do is protect the health and welfare of the citizens of Waynesville. We don’t always get it right out of the gate, but to say that we’re deceiving people and weaponizing ourselves simply isn’t true.”