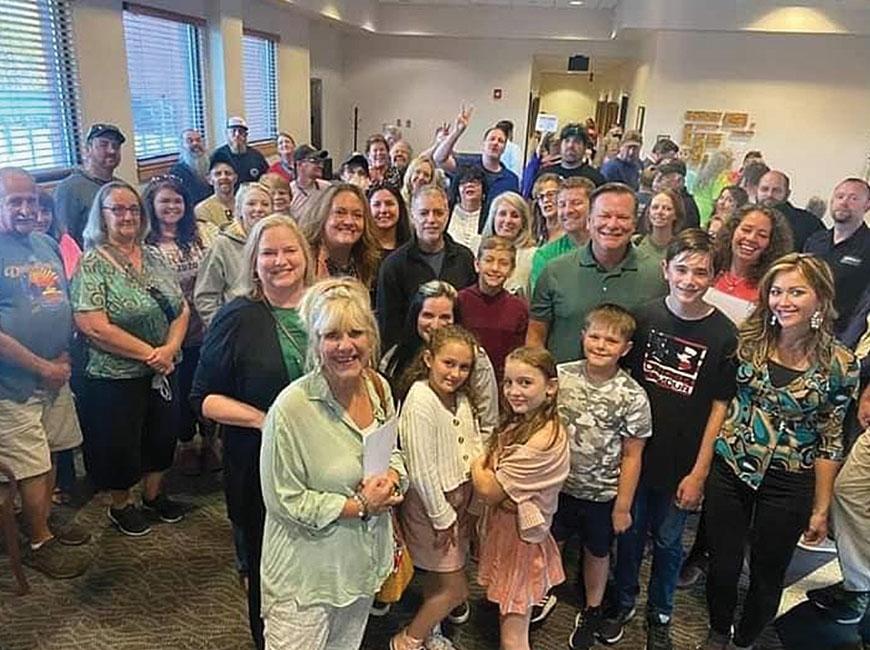 Dozens of people flooded the Waynesville Board of Aldermen meeting last week to protest a mask mandate that wasn’t on the board’s agenda. Donated photo

A routine housekeeping measure intended to clarify who, exactly, can declare a State of Emergency on behalf of the Town of Waynesville — and, for what reasons — devolved into a disruptive shouting match over a non-existent “mask mandate.” Town officials, including Mayor Gary Caldwell, attribute all the fuss to a sensationalized story containing multiple inaccuracies.

The agenda published in advance of the Oct. 27 Town of Waynesville Board of Aldermen meeting contained, among other things, a mundane procedural item regarding emergency powers.

Ordinances regarding States of Emergency typically delineate who is authorized to declare such an emergency and reasons warranting such a declaration. Usually, they are natural or human-caused emergencies like ice storms, industrial accidents or civil unrest.

A State of Emergency grants local governments additional powers, including the ability to declare curfews, close alcohol and gun shops, and ban the sale of gasoline. They’re designed to keep people off the streets and out of harm’s way so first responders can tend to the emergency without distraction.

As it turns out, the town’s existing ordinance was based on a state law that had been repealed and replaced. Town Attorney Bill Cannon was put to work updating it.

“He had to rewrite our basic State of Emergency ordinance in conformance with a new law that the legislature passed after they repealed the old one,” said Waynesville Town Manager Rob Hites. “The new law states that the board of aldermen can delegate the power to declare an emergency to the mayor and in his absence, the mayor pro tem.”

The updated version also added “public health” to the list of emergencies that could warrant such a declaration.

On the agenda, the action associated with the revamped emergency ordinance was to authorize the mayor pro tem to declare such an emergency if the mayor is incapacitated or unreachable.

Attached to the ordinance, however, was a “sample” proclamation — Cannon’s vision of what a mask mandate might look like.

That item was referred to as a sample throughout the agenda packet. No action was associated with it, no public hearing was called for it and there was absolutely no indication on the agenda that any vote would be taken on it.

That’s why several of Waynesville’s elected officials took issue with a story published by The Mountaineer the day before the meeting, that stated, “Waynesville is expected to issue a state of emergency proclamation Tuesday evening mandating face coverings within the town limits, barring certain legally allowed exemptions.”

“That statement would not be accurate,” said Caldwell. “Definitely not.”

Caldwell explained that the since the sample proclamation wasn’t listed as an action item on the agenda, and no public hearing was associated with the item, saying a mask mandate was “expected” was way off base. He also said that even if they’d decided to consider Cannon’s “sample proclamation,” there were too many defects — for example, how does it apply to schools, to churches and to private businesses?

“Before you can even pass a proclamation like that, you would have to have those answers to go with it,” Caldwell said.

Alderman Anthony Sutton echoed Caldwell in saying he did not find the statement in The Mountaineer to be accurate. Alderman Jon Feichter said he wouldn’t make any decision before a public hearing.

“I don’t know that there would have been an expectation that we would have passed that exact proclamation,” said Alderman Chuck Dickson. “I can say that I expected that we would talk about it. As far as the particular agenda item, it was actually not on the agenda. The only thing that was on the agenda was the emergency ordinance.”

Mayor Pro Tem Julia Freeman agreed that the sample proclamation was not actually on the agenda, although she understood why it could be perceived that way.

Another inaccuracy in The Mountaineer story, according to Sutton, was a statement saying: “Town board members are unanimously backing the local mask mandate although the order would technically be signed into law by Mayor Gary Caldwell as a state of emergency proclamation.”

Sutton said he never told The Mountaineer reporter he would support any such proclamation.

“I don’t comment on how I will vote before anything comes before the board, because you generally don’t know how the other board members are going to react, or after listening to public comment how you would react,” he said. “So, I try to go into things without prejudging the outcome.”

Yet another problem noted by Sutton and Caldwell was that throughout the news story the “sample” proclamation is repeatedly referred to as a “proposed” proclamation. The agenda for the meeting does not show any “proposed” action for the sample proclamation, other than review. No proposed vote. No proposed public hearing.

“I try not to judge people’s intentions, so I’m trying to give people the benefit of the doubt, but as far as I can say, that was an inaccurate statement,” Sutton said. “It was my assumption that it was a sample [proclamation].”

Moreover, another inaccurate statement in The Mountaineer story says the sample proclamation that wasn’t even up for a vote or a public hearing would “presumably include backyard cookouts with extended family members or even a conversation among neighbors at the mailbox if social distancing isn’t being adhered to.”

“That was definitely ridiculous, yeah,” Caldwell said. “That’s more proof that there’s just no way that you could have passed a proclamation with that language in it.”

Sutton said The Mountaineer’s presumption was “inaccurate as to what the sample proclamation stated.”

“I don’t think we would ever consider trying to ban what somebody does in their own home, or in their backyard. One of the reasons we wouldn’t ban something like that is because that’s completely unenforceable and that’s not the intent of this ordinance,” he said. “I mean that the intent is not to be arresting people or making everything illegal. The purpose is to get people to be safe.”

Feichter agreed that the claim was sensational.

“I do. In considering whether or not the town of Waynesville should require mask usage in town, my thoughts never, ever extended to the possibility of people being required to wear masks on their private property or, when they went to their mailbox,” he said. “My only concern was in publicly accessible spaces like the grocery store or the Walmart or whatever. I never have or will have any interest in telling a somebody what they can or cannot do on their private property.”

The statements in The Mountaineer’s story turned what should have been a dull meeting with a number of non-controversial items on the agenda — like the revamped emergency ordinance — into a virtual free-for-all and a rallying point for anti-maskers.

Dozens of people showed up for the meeting and ignored requests by town officials and police officers to wear masks. They also refused to leave once they exceeded Gov. Roy Cooper’s mass gathering limit of 25 people, as well as the fire code capacity of the building.

“The best I can remember, what she said was, ‘The virus isn’t real, see, look, I’m gonna hug you,’ and she hugged me,” Fowler said. “Then she said, ‘I’m gonna kiss you,’ and grabbed my shoulders and started shaking my shoulders.”

The crowd at the meeting became so disruptive that Feichter made a motion to table the emergency ordinance revamp altogether.

Caldwell lays the blame for the fiasco on the story.

“The Mountaineer blew this out of proportion from what it was going to be,” he said. “There was no action that would be taken that night.”

He even called out the reporter at the meeting.

“I can’t remember the way I put it. I didn’t come out with the words ‘fake news,’ but I did put it out that ‘You do know the reason why they lie to promote what is going on here tonight, because this is what helps sell newspapers,’” Caldwell said. “Bad news is what they want. They do not want any kind of good news. They only want bad news, and I said, ‘This is what they’re trying to promote to sell the newspaper.”

As of press time, the agenda for the town’s next meeting, scheduled for Nov. 10, has not yet been published.

State and local guidance continues to hold that wearing a mask is the most effective and practical way to avoid passing the coronavirus from person to person.