This must be the place: The velvet it rips in the city, we tripped on the urge to feel alive 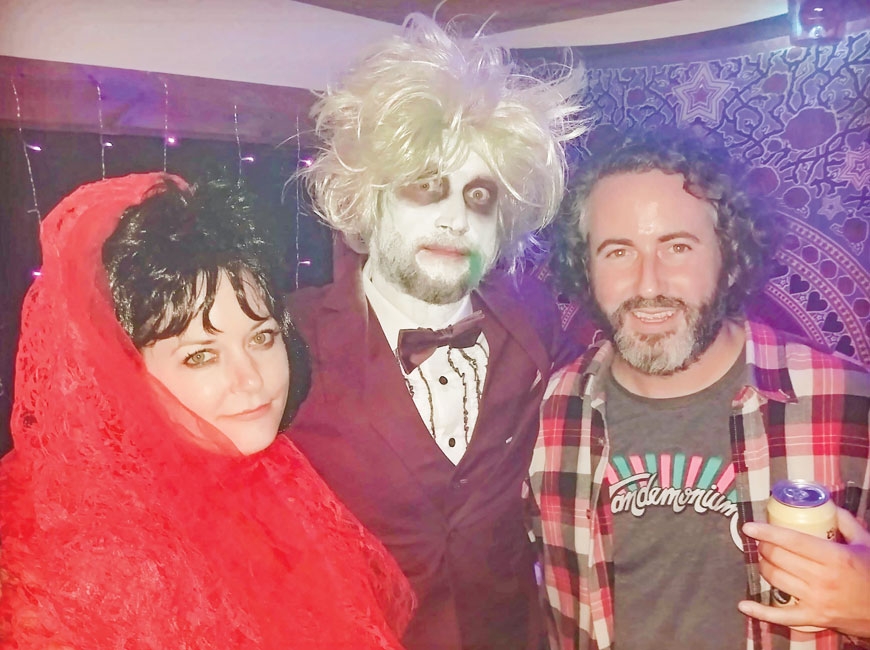 I could hear the planes overheard from the nearby Nashville airport. The room was cool. The bedsheets warm. It took me a moment to realize I was in Room 219 of the Red Roof Inn. Monday morning and a few hundred miles from my apartment back over the state line in Waynesville.

I hadn’t planned to find myself at the motel. But, a whirlwind weekend in and around Music City landed me there. Leaving Haywood County on Saturday afternoon, the plan was to head to Mount Juliet, just outside Nashville, to spend Halloween with one of my oldest friends, Sarah, and her husband, Joe.

Sarah and I have known each other since middle school, growing up in neighboring small farm communities on the Canadian Border of Upstate New York. High school dances, house parties, concerts, and so on — thick as thieves ever since.

She ended up in Tennessee. Myself in Carolina. And through that, she met Joe, a wild, wondrous soul also from New York (Buffalo) who found work and a life below the Mason-Dixon Line. Each time I find myself passing through Middle Tennessee, I tend to wander down the backroads to their farmhouse, tucked in the tree line near a quiet lake they fish and kayak on after work every evening.

The Halloween party overtook most of their driveway, backyard and garage. Folks from all corners of the local area. Fridge full of beer. Burn barrel. Costumes. Stereo blasting dark, ominous melodies. Laughter. A full moon overhead. Drinks hoisted high and in the moment. Heavy eyelids sometime around 2 a.m.

Sunday morning. Being an hour behind in Central Standard Time, the NFL games would kickoff at noon in these parts. My New England Patriots were facing Sarah and Joe’s Buffalo Bills. It was decided to head to the local sports bar. Situated in a generic shopping plaza just off Interstate 40, the watering hole was packed with Tennessee Titans fans and the sporadic Pittsburgh Steelers diehards.

By halftime, the Bills were pulling away from the Pats. In a sign of solidarity and friendship, we all decided to do a shot and celebrate simply being in the presence of each other, in this random dive bar on the fringes of Nashville.

And it was right at this moment I received a text from this girl. A month prior, while passing through Nashville, I’d matched with her on Hinge. Now, first and foremost, I detest dating apps and the like. It’s not my thing, but you do what you can in the modern era, eh?

I’m of the old-school mentality of striking up a happenstance conversation with a complete stranger of the opposite sex, though that’s pretty much come to a halt with the pandemic and shutdown. I find the apps more of a novelty and something of a toy to meander around when you’re bored and can’t seem to fall asleep.

That said, we connected and aimed to meet up the next time I found myself in Nashville. With the sun now slowly disappearing by the late afternoon, we agreed to meet up halfway at this dive bar near the airport. I jumped into the truck and took off for the Donelson Pub.

She’s from the Chicago suburbs. Professional musician. Learned classical violin at the prestigious Berklee College of Music in Boston. My age. Been in the music industry as long as I have. Aspirations to take over the world through hard work and curious adventures along the way.

It was surreal and so damn refreshing to be on a date again. It had been awhile, more so in face of how 2020 has affected us all. After two hours of nonstop, jovial conversation, we threw caution to the wind and took an Uber to downtown Nashville (aka: Broadway).

Why not paint the town red? Deal with tomorrow, well, tomorrow, right? But, within seconds of being dropped off on Broadway, it became apparent we were too late. The clock turned to 11 p.m. as the bars all began to shut down due to the state’s mandates amid the pandemic. Turn off the lights and don’t forget to lock the door.

Not to be deterred, her good friend (a bar owner in Printers Alley) had a place nearby. Find some hearty conversation and grab a nightcap. Next thing I know, I’m standing on this first-floor front porch right in the heart of the city, sipping some bourbon with this former professional rock guitarist turned successful bar owner.

Somewhere around 1 a.m. we knew it was time to shove off. She headed back to her place. I took an Uber back to my truck at the pub. We made plans to meet up again soon. A half-hour later, I’m standing in this empty bar parking lot, ready to head back to Sarah and Joe’s.

And it was right then and there that I realized one of my headlights was out. With my hands covered in grease and drops of blood, I emerged from under the hood unsuccessful several minutes later. The other headlight bulb in my glovebox didn’t work.

Not wanting to chance being pulled over with a busted headlight, out-of-state license plates while navigating backcountry roads at 2:30 a.m. I decided to leave the truck and deal with it in the morning.

With the bright lights of the Red Roof Inn sign next door like a lighthouse pulling my lost ship back to shore amid choppy waters, I checked into room around 3 a.m. The front desk clerk gave me a discount due to the absurdity of getting a room so late.

The sounds of airplanes overhead, I sat on the bed and watched some late-night TV. Sipping a lukewarm Budweiser, I was three-hundred miles from my Carolina apartment. Onward back to work and daily responsibilities come morning. You win again, Nashville. Always a pleasure. Kudos.