This must be the place: Ode to the front porch, ode to the pink couch 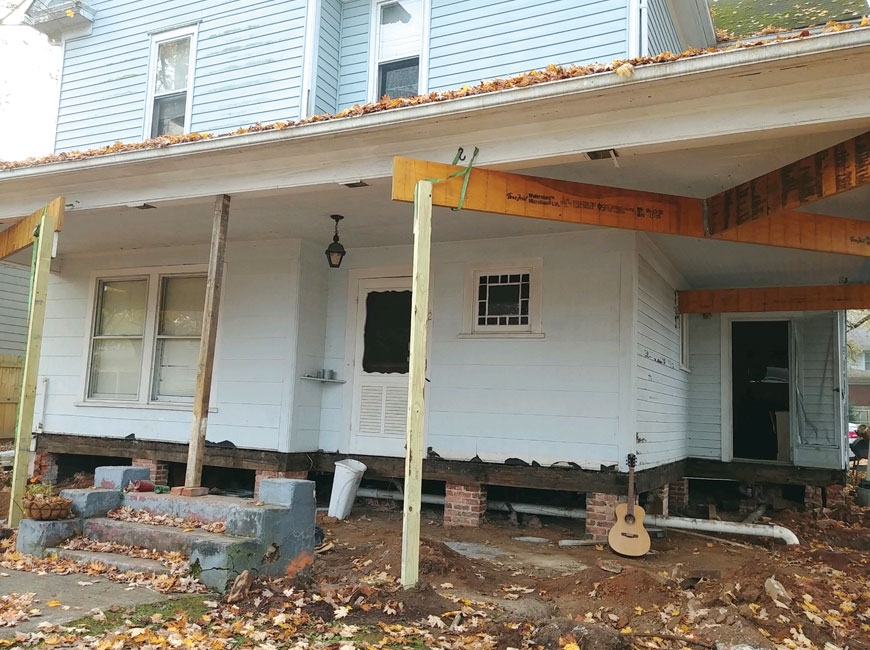 I awoke to the hammering of nails and the sound of a cement mixer. Opening the front door, it was a steep drop of a few feet to the cold dirt below. The old front porch was long gone. The new front porch now in the midst of construction.

For the last eight years, I’ve lived in a small one-bedroom apartment in downtown Waynesville. It’s one of four rentals in an old two-story house. My humble abode is filled with shelves of books, vinyl records, guitars and a cozy bed.

All I need. All I want. No frills. No fuss. The rent is inexpensive and my landlord is truly good folk. The apartment also came with a large wrap-around porch: a place to perch myself and decompress, to simply watch the world flow by my field-of-vision.

The first day I moved to Waynesville back in August 2012, I remember sitting on a musty pink couch that was leftover by the last renter of the apartment. I guess the renter forgot to dispose of the tacky couch, so there it sat on the weather-beaten, paint-peeling and creaky porch.

After putting down my first and last month’s rent, getting my electric connected and such, all that was left in my bank account was $33, at least until my first paycheck with The Smoky Mountain News, which was several days away.

I was 1,100 miles from my native Upstate New York. Twenty-seven years old and leaving everything behind in hopes of a fresh start in Western North Carolina. With that $33, I got a Subway sandwich and six-pack of Pabst Blue Ribbon. Sitting on the porch, I consumed the starving artist’s go-to meal with gusto: life is about adventure and chance, and this new chapter would emerge as all of those things.

As the newest resident of Haywood County, I didn’t know a single soul when I relocated here. So, the front porch became the place where I would constantly host folks, all in hopes of making a connection with another kind soul.
It became the after-hours spot once last call was announced from the downtown Waynesville establishments, the ole saying “you don’t have to go home, but you can’t stay here” implied by the bartenders as we nighthawks headed for the porch and whatever cold suds were lingering in the refrigerator.

Some of my closest friends in this region (and of all time and space) became that way from time spent on the front porch. There were even a couple of love interests sparked from sitting on the pink couch and discovering the inner beauty of a femme fatale who’d happily consume pieces of my heart for the foreseeable future.

And there were all those cold afternoons when the Waynesville Christmas Parade would (and continues to) lineup in front of my house. I’d stand on the porch and watch the local high school marching bands rehearse their routines in the parking lot next door, all while an endless stream of floats and fire trucks pass by.

Lately, I’ve been thinking a lot about two old friends who aren’t physically on this planet anymore. Louie and Papa Jack. Both were homeless in downtown when I met them. White beards, a little rough around the edges, and with a sharp wit about them.

Early on with the newspaper, I befriended Louie, which led to the friendship with the Papa Jack. They’d each come visit me and sit on the pink couch. I’d hand them a tallboy and we’d just chat about nothing and everything, usually right when the sun was hanging low over Balsam Gap.

One afternoon, Papa Jack, who at the time was living upstairs in my building, wandered by the front porch heading for the mailbox. He stopped and leaned against the porch railing. With a sly grin, he goes, “What’s new in the world, Mr. Journalist?”

And I told Papa Jack the latest happenings in the town, county and greater Western North Carolina. He shook his head and laughed at the absurdity of life, politics and social happenstance. Inviting him up to the porch to join me for a beer, he sat on the pink couch and, unprovoked, proceeded to tell me his entire life story.

Sitting in my camping chair, I listened intently to his tale of being a young kid in rural Virginia, leaving home as a teenager, all the trouble he got into and out of, and how he ended up becoming a sniper in Vietnam, which led to a lifelong struggle with PTSD and drug addiction, now an old man alone, but seeking inner peace and stability in a haphazard existence.

He finished his beer, looked up at the sunset over Balsam Gap in the distance and smiled. Getting up from the pink couch, he thanked me for my time and hospitality, and headed back upstairs to his apartment.

The next morning, I found out he had passed away. A day later, what was left of his possessions was now on the curb, his beat-up recliner ending up on my porch for a few years, next to the pink couch as almost a memorial to his gentle spirit.

And thus, here we are. The weather-beaten, paint-peeling and creaky porch is no more. And I was sad to see the pink couch tossed into the contractor’s trailer headed for the dump. Though the past kept tugging at my heart and soul, it was time to replace both.

Lately, I’ve been hopping out of my front door and onto the cold dirt below. Popping open my camping chair, I’ve been placing it where the pink couch used to be. Sitting on the chair, I strap on my trusty acoustic six-string and pluck a tune or two. Porch or no porch, the space remains: a place to perch myself and decompress, to simply watch the world flow by my field-of-vision.

Life is beautiful, grasp for it, y’all