Courage for the road: Anders Beck of Greensky Bluegrass 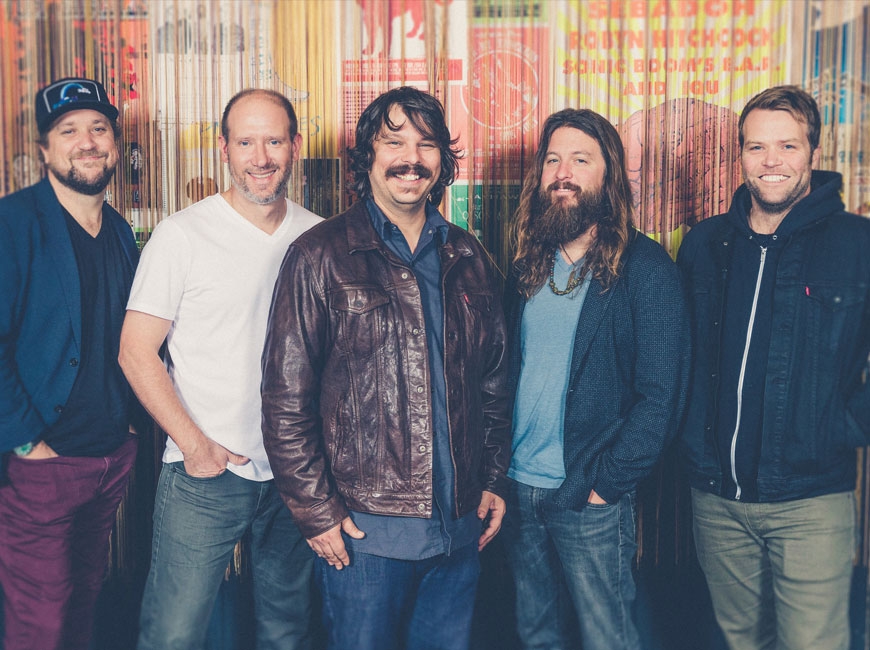 Coming into 2020, Greensky Bluegrass was looking forward to celebrating its 20th anniversary. A relentless national touring act, it would be countless shows and festivals — in front of an endless sea of folks who travel far and wide to listen and immerse themselves in the band’s seamless blend of bluegrass, jam and rock music.

But, this year had other plans for the legendary group, as it did for the rest of the music industry and planet as a whole. And yet, here we stand, each of us trying to navigate these unknown waters of time and space, all while discovering and embracing the silver linings in our respective lives.

For Greensky, it’s been an introspective period, peeling back the layers of two decades crisscrossing the country in hopes of finding creative and financial stability in an often-unforgiving musical landscape.

Formed at a Halloween party in 2000 in Kalamazoo, Michigan, Greensky emerged from humble beginnings, simply a small group of young friends looking to pick some tunes, stir up some fun and, most of all, be a catalyst for connectivity and melodic joy in our cosmic universe — 20 years later, that ethos remains.

Smoky Mountain News: With this downtime in the music industry due to the shutdown, it’s probably giving you some time to reflect on your time in the band and the band’s 20th anniversary.

Anders Beck [dobro]: Yeah, that’s for sure. It’s just such a unique situation to be in. The 20th anniversary of the band this Halloween, that goes back to when [guitarist] Dave [Bruzza], [mandolinist] Paul [Hoffman] and [banjoist Michael] Bont were starting.

The first time they played together live was in the basement of Dave’s house for a Halloween party. They needed a name and somebody suggested “Greensky Bluegrass,” this ironic name that’s bluegrass and the opposite of that.

So, they played a show as Greensky Bluegrass. Just this house party, the usual first band kind of thing. But, there’s no denying that becomes the first Greensky Bluegrass show. Then, [bassist] Mike Devol and myself join a few years later.

And here we are 20 years later. From that little show to three nights at Red Rocks [Amphitheater in Colorado] — that’s something to celebrate. Even if it makes you a little old, it’s still a reality. [Laughs].

SMN: When you think about those early days in the band, what sticks out the most?

AB: I think, for me, it was the amount of belief that we had in it. It’s kind of shockingly amazing to me. Back in those days we’re playing tiny bars to 20 people and be like, “Yeah, this is going to work. We got something here.” But, then the next time you go through that town, there’s 30 people there. The whole thing was this word of mouth.

We didn’t have any MTV or radio hits or anything else. Play a good show. Release a good album. And then slowly build the thing. I think that’s why our fan base is as real as it is, you know? That’s why people are still there. It’s really human connection, good songs and good shows. It’s building it one person at a time. That’s how it got done.

SMN: Why the dobro? Why was that the instrument you felt you could best communicate with musically?

AB: I started out playing drums, then [acoustic] guitar and electric guitar. When I was started gravitating toward bluegrass, flatpicking the guitar wasn’t really working for me that well, as far as like transitioning from an electric guitar player to a bluegrass guitar.

I sort of stumbled upon the dobro as an instrument. And I realized because of the sustain it has — it’s got the longer notes — that it sounded kind of like the electric guitar of acoustic music. That’s what really grabs me with that particular instrument.

To this day, that’s still what I like about it. It’s really unique sounding. And then, over the years, I’ve kind of put some of my electric guitar influences back into the dobro — to try to evolve it and make it my own instrument, too.

SMN: You’ve had a career creating and performing music around the world, meeting folks from all walks of life and having all these experiences onstage. What has that taught you about what it means to be a human being?

AB: I’ve been on both sides of it. I used to follow bands around the country — Phish, The Grateful Dead and stuff like that. And I remember when people started coming on tour and seeing multiple Greensky shows. The idea that it had flipped, that I got to create that joy for people that I’d gotten from other musicians was an amazing feeling.

On a human level, the idea that what I’m doing can make someone happy for two or three hours and just take them out of whatever is going on in their lives, to give them something to look forward to or something that makes them feel a certain way, whether it’s to dance and smile, laugh or cry, or whatever, to make people feel — it’s an amazing thing and it’s never lost on me.

Presented by the Asheville Music Hall, Greensky Bluegrass will perform three shows as part of a Halloween drive-in series on Oct. 29-31. Celebrating the band’s 20th anniversary, the performances will be held at Blue Ridge Falls, located at 337 Glen Cannon Drive in Pisgah Forest (outside of Brevard).

All social distancing and safety protocol will be encouraged and enforced. www.ashevillemusichall.com/greenskyhalloween.