This must be the place: Things change but you don’t realize you have all you need 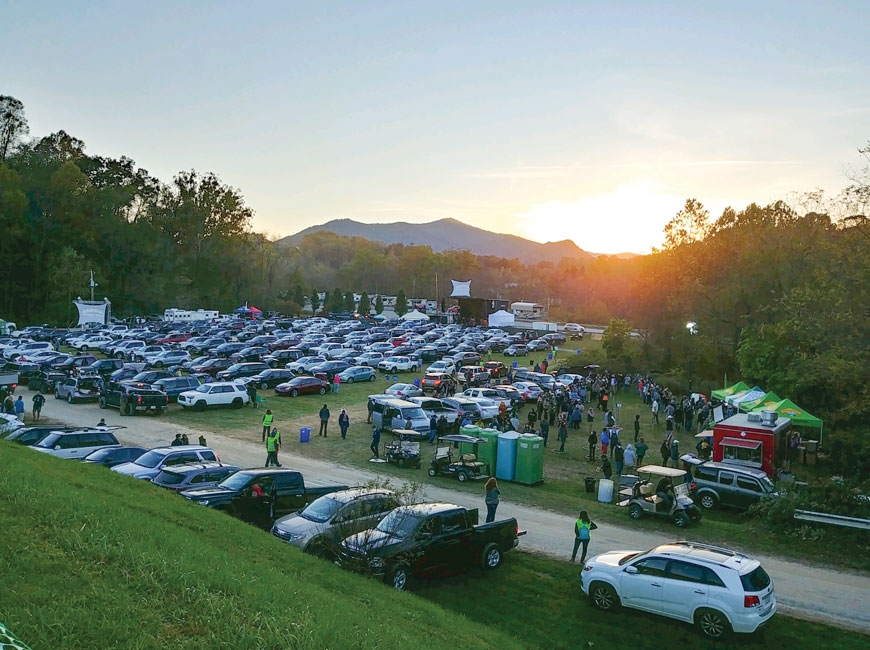 About halfway through the first set of the sold-out Goose drive-in show last Saturday, a friend turned to me and said with a smile, “You know, we’re probably going to follow this band around for the next few decades, right?”

Nodding in sincere agreement, I sipped my drink and gazed around the Smoky Mountain Event Center in Waynesville. I took inventory of not only the 375 cars of joyous music freaks pushing up the hill and over the ridge of the fairgrounds, but also the serene and jovial tone of one of the emerging torchbearers of live music.

Hailing from Connecticut, Goose is an intricate ensemble, one that resides at the intersection of rock, jam and soul music. It’s catchy and incredibly inclusive. And yet, doesn’t shy away from complex improvisation jams, always in search of the “you had to be there” moments on a nightly basis.

“We love when people get fired up and yelling [in excitement during the show], this huge pull of energy,” Rick Mitarotonda, lead singer/guitarist for Goose, told The Smoky Mountain News following the performance. “But, I’ve started to get more patient and listen and get a little quiet at certain times during the whole thing, which I think, in the long run, is a really good thing for the evolution of the band, the sound and our improvisational language.”

With the ever-popular drive-in series taking the lead on the slow reopening of the music industry across America, these shows have provided an outlet after seven months of radio silence in the live music realm.

In regards to Western North Carolina, we’ve — in essence — become the live music capitol of the Southeast between the drive-in series at the Waynesville fairgrounds put on by the Asheville Music Hall and the series hosted by The Grey Eagle at the Maggie Valley Festival Grounds. Seemingly every weekend this fall, our backyard has become filled with sold-out show after show of national touring acts — all eager to perform in real time in front of real faces again.

Until these outdoor shows started to appear this summer, most bands had to get creative, with Goose way ahead of the curve, in terms of online streaming and innovative avenues in developing digital content and attracting viewers. Even before the shutdown, Goose was constantly filming and uploading its music for consumption.

“When you’re a young band going out on the road, trying to build a grassroots following one person at a time, word of mouth is the strongest thing. But, if create a little bit of a buzz [online], people want to find out about band and see what’s going on,” Mitarotonda said. “It’s video. It’s soundboard recordings [from shows] and studio recordings. Content for [listeners] to go find that exists online. So, at a certain point, it became our goal to create this little world [online] for people to go to.”

Strolling the perimeter of the Smoky Mountain Event Center, an odd, yet familiar feeling came over me, that sense of self that only reveals itself in the midst of live performance. My life has revolved around concerts since I was in middle school. It’s the place by which I’ve been able to put down deep roots — as a journalist, but more so as an utter music freak.

“There’s a lot of moments where I’m going with ‘it’ or staying in the moment, responding to what needs to get done in that moment [onstage],” Mitarotonda said. “But, then I’ll see something online and I realize all these individuals, there’s not just numbers on a page — they’re people out there and they’re coming to [the show]. They know what we’re doing and their lives are affected by it in some way. And I just want to do the best I can to serve that.”

Looking towards the massive stage bordering Route 209, I started to come out of my fog of this “new normal” for society and humanity, in general. Being in the presence of pure tension and release that resides in the depths of a 20-minute jam, the line between Goose and the audience became blurred by the immense energy radiating from both sides of the microphone.

“You know, it’s a strange thing, but the joy in playing music? It’s a fine line between becoming really proficient at an instrument and maintaining your personal connection to music and your real enjoyment from playing music — it’s [remembering] that the instrument is a communication piece [to connect people],” Mitarotonda said.